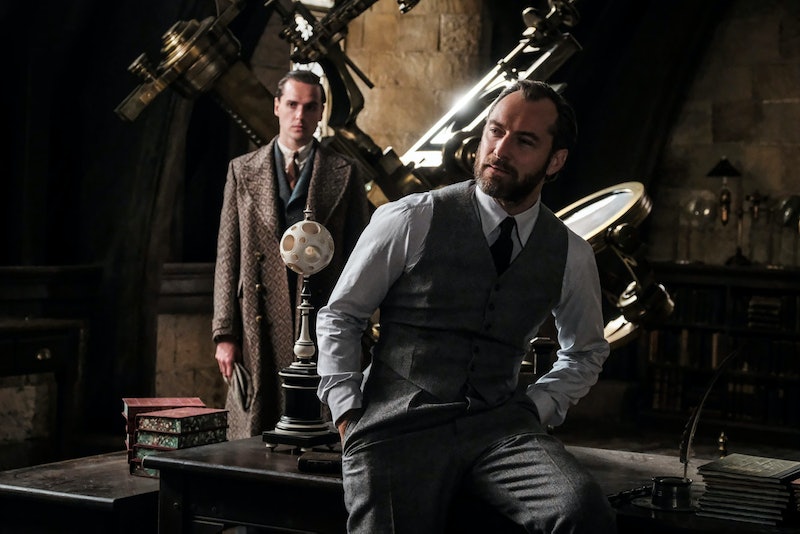 The film isn't out for another few months, so read the new details that J.K. Rowling teased about Fantastic Beasts 2 at your own risk. (Because it's about to give you so much to think about that the days between now and Nov. 16 are going to creep by.) You might have thought you knew what direction the magical followup was heading in from the title — Fantastic Beasts: The Crimes of Grindelwald — but the Harry Potter author says that Fantastic Beasts 2 is about "how Dumbledore became Dumbledore," so get excited.

Rowling dropped this new bomb during a brief TODAY interview on Monday, Sep. 24. Standing outside in the chilly New York air with the show's hosts, the beloved British author and screenwriter shared her excitement at getting to inhabit the magical world once more: "This is like time travel," she told them, adding, "I feel like I'm back about 20 years, this is amazing." Rowling seems to be referring to the atmosphere that surrounded the release of both books and films in the Harry Potter series, a feverish anticipation that has returned in advance of the Fantastic Beasts 2 premiere.

The 53-year-old told the TODAY hosts that she's currently working on the next work in her Robert Galbraith mystery series, and acknowledged that she could churn out more Harry Potter material "if I wanted to." (Everyone please take this opportunity to cross your fingers tightly that she wants to again sometime very soon.) But Harry Potter aside, Rowling is excited to be back "in wizard world" again, and she promised that this new film would give fans a behind-the-scenes look at some of the elements of the world that haven't been front-and-center in the past.

Responding to a prompt from Al Roker about whether "in this next movie we actually get to finally get a sense of Hogwarts and Dumbledore," Rowling responded emphatically, if a little surprisingly. "Oh absolutely, yeah," she said, before continuing, "These movies are largely about how Dumbledore became Dumbledore. That's one of the things that's going on in this franchise."

Naturally, Hoda Kotb pressed her on other overarching themes of the franchise, quizzing Rowling on whether there would be any Easter eggs hidden for die-hard fans. But the author kept her lips zipped, promising that the trailer planned for release on Tuesday, Sep. 25 will answer a lot more questions.

One question that remains somewhat more open is whether Dumbledore will continue to eclipse Grindelwald in the discussion of a movie that bears the latter's name in the title. Johnny Depp's casting in the role of the villain has been contentious from the beginning, especially in light of his ex-wife Amber Heard's allegations of domestic abuse against him. Depp has vehemently denied those claims, and the pair reached a settlement in their divorce. After the allegations and the release of Fantastic Beasts and Where to Find Them, fans campaigned for the role to be recast, but to no avail. In fact, Rowling herself has defended Depp's casting.

And, though Depp did appear to promote the film at San Diego Comic Con, he was not present in New York to tease the upcoming trailer with Rowling and other cast members. That said, none of the film's three male stars — Jude Law as Dumbledore, Depp as Grindelwald, and Eddie Redmayne returning as Newt Scamander — joined Rowling during her Monday morning appearance, so it's anyone's guess as to who will truly claim the spotlight in the film.

In the meantime, longtime fans can breathe a bit easier, because it seems as though the focus will largely be on familiar elements like Hogwarts and Dumbledore himself. It sounds like a skillful weaving together of new and old elements that is still at work in Rowling's creative brain, so November can't come quickly enough to see how this all plays out.

More like this
Lin-Manuel Miranda & Tituss Burgess React To 'Little Mermaid' Casting Backlash
By Radhika Menon
Nicola Coughlan Shared A Lady Whistledown Excerpt From ‘Bridgerton’ Season 3
By Grace Wehniainen, Alyssa Lapid and Sam Ramsden
Viserys’ Fate On 'House Of The Dragon' Could Differ From The Book In This Surprising Way
By Grace Wehniainen
'The Lord of the Rings: The Rings of Power' Revisits Iconic Spots From 'The Hobbit'
By Darshita Goyal
Get Even More From Bustle — Sign Up For The Newsletter