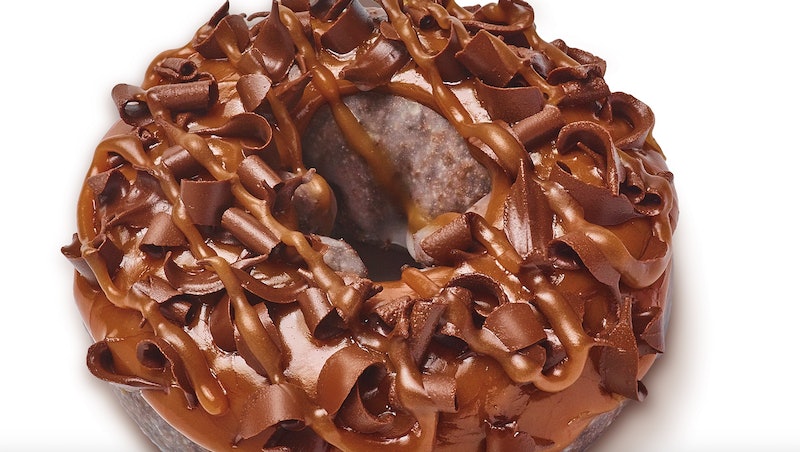 The holidays are over but Dunkin’ (nee Dunkin’ Donuts) has a few gifts that will soothe your post-party blues. For starters, Dunkin’ has a Caramel Chocoholic Donut that will satisfy your sweetest of sweet tooths. (Sweet teeth? Sweets tooth? Pre-cavity mouth bones?)

As an email release for the Dunkin’s newest products describes, “the Caramel Chocoholic Donut features a classic chocolate donut frosted with caramel icing, sprinkled with semi-sweet chocolate curls and finished with a drizzle of caramel icing.” Dunkin’ heard you like chocolate. So, they put chocolate on your chocolate and topped it with more chocolate. Also, caramel.

I mean, it has “chocoholic” in the name. What did you expect? A single chocolate chip? A measly single coating of chocolate frosting? Nope. Wrong. Regular chocolate donuts are for 2018. This is 2019 and our donuts did not come to play. They come bearing chocolate curls, caramel icing, and the promise of better tomorrows. They come with their hair done and their bills paid. The Caramel Chocoholic Donut is what donut children look to, asking their donut mommies and donut daddies in hushed whispers, “Is...is that a donut princess?”

No, children. That is a donut queen. And we are all but that donut’s lowly peasants.

The Caramel Chocoholic Donut isn’t actually brand new. It was initially introduced in 2018. Because it was so beloved, Dunkin’ is bringing that chocolate-caramel energy into the new year. They’re also bringing back another fan favorite: the Brown Sugar Chipotle Bacon Breakfast Sandwich. So many words for a sandwich! What do they all mean together? Dunkin’ describes the sandwich as featuring “a double portion of caramelized brown sugar chipotle bacon – made with real brown sugar and chipotle seasonings — along with egg and cheese served on a buttery, flaky croissant.” It is basically all the breakfast foods in one, handheld sandwich.

If you want to start your morning off absolutely buck wild, perhaps Dunkin’s New Energy Cold Brew is for you. According to a press release, the drink combines “Dunkin’s signature cold brew coffee with a shot of its freshly brewed espresso.” You know how just looking at a cup of cold brew makes your brain think it's unlocked the Matrix? Imagine that spiked with espresso. Plus, a donut. Maybe global warming would be solved by now if we all amped our brains up on espresso-laden cold brew.

There’s also a new Power Breakfast Sandwich at Dunkin'. What gives the sandwich its power? Is it more cold brew? Nope, just some eggs. The new sandwich “features a veggie egg white omelet with spinach, peppers and onions, turkey sausage and American cheese on a new multigrain sandwich bread topped with seeds and rolled oats.” It contains 24 grams of protein and a savory salve to the Caramel Chocoholic Donut you just inhaled.

Also, remember how Dunkin’ Donuts is just Dunkin’ now? That new name change is starting to roll out this month and will start to be reflected on upcoming brand packaging as well as in stores throughout the beginning of the year.

What can you expect from Dunkin’ sans ‘Donuts’? According to Tony Weisman, Chief Marketing Officer, Dunkin’ U.S.: “Our new look represents both our heritage and our evolution as the brand that fuels optimism and keeps America running with great coffee, donuts and more. What better time than the start of a new year to bring our new look to our coffee cups and packaging, and introduce a new energy to our restaurants and our fans.”

It's like when you go to college and start going by a new nickname. You're still bringing that full name energy, just in a new package. Does that make sense or are my donut-cold brew powers starting to fade?