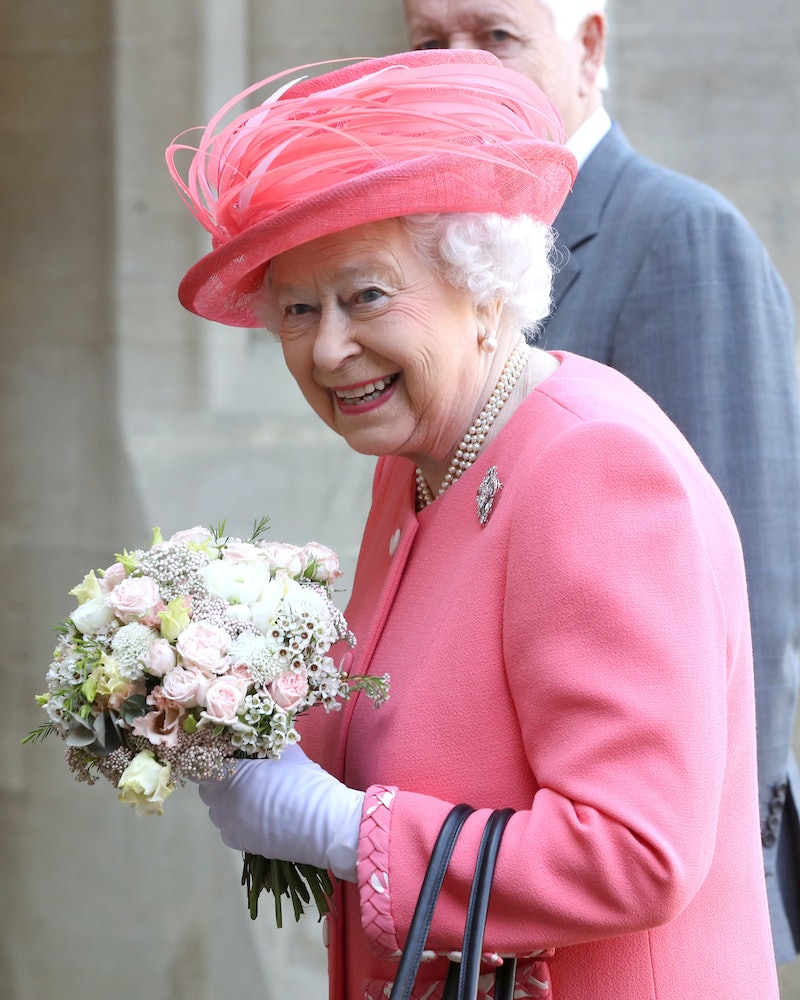 Here is further proof that age is only a number. On the same day Prince William and Kate Middleton welcomed royal baby #3, Queen Elizabeth II was horseback riding. According to the Daily Mail, which also obtained photos of the Queen riding a horse like a boss at 92, she rode "her beloved black Fell pony, Carltonlima Emma" at Windsor Castle. Head Groom Terry Pendry also accompanied the Queen, as she rode around the grounds. As showcased in the photos, Queen Elizabeth looked comfortable in her headscarf and tan jacket.

Now, the way the Queen spent her day while William and Kate were at the hospital celebrating their baby might surprise many people. One might not think a 92-year-old woman would be horseback riding, but who says they can't or shouldn't? Age doesn't define anybody, nor should it stop anyone from doing what they love. If an older person is willing, ready, and able to ride a horse, then they should absolutely do it.

And some might be confused why the Queen was just chilling riding her horse when the fifth in line to the thrown was being born. Well, pregnancies are always unpredictable, so Queen Elizabeth probably wasn't going to put her schedule on hold and wait around for Middleton to give birth. Plus, what was she going to do at the hospital? And it's not like any other family members (minus Prince George and Princess Charlotte) showed up at St. Mary's Hospital, either. The Queen wanted to ride her horse, so that's exactly what she did.

In March 2017, the Queen was also spotted horseback riding. She was 90 at the time — and only a month shy from her 91st birthday. As reported by The Telegraph, she rode her horse along the River Thames and was, once again, joined by Pendry.

For those wondering why the Queen wears a scarf rather than a helmet, The Telegraph reported in May 2012 that Sally Bedell Smith, author of Elizabeth the Queen: The Woman Behind The Throne, said the Queen's trainer, Ian Balding, told her the Queen's never been one to wear helmet.

According to Bedell Smith, Balding recalled a conversation he once had with the Queen about her head attire: "'I really think it is ridiculous that you above all others do not wear a crash helmet,' he said to the Queen while hacking in The Home Park, Windsor. 'I never have,' she replied, 'and you don’t have to have your hair done like I do'".

Per Bedell Smith, there was a reason for the Queen's decision: "It was an expression less of vanity than the practical need to be ready for her appointments."

As fans of Netflix's The Crown know, Queen Elizabeth has always loved horses. There are many scenes featuring Claire Foy as the Queen riding horses and spending time at the stables. Like The Telegraph reported in June 2016, the Queen has always said riding horses gives her the opportunity to be "just another human being".

In November 2014, the Queen also received a huge horse honor. She was presented with the FEI (International Federation for Equestrian Sports) Lifetime Achievement award. "Her Majesty Queen Elizabeth is a life-long lover of horses who has inspired millions around the world and I am honored to be able to present the first-ever FEI Lifetime Achievement award to Her Majesty on behalf of the FEI today”, FEI President HRH Princess Haya said in a statement.

"She is a true horsewoman, who still rides whenever State business allows, and her knowledge of breeding and bloodlines is incredible," Haya continued. "The bond between The Queen and horses is truly extraordinary and I can’t think of anyone more fitting to receive this very special FEI award in the Year of the Horse. I am very proud to be giving this award on behalf of the FEI family."

Even though Queen Elizabeth wasn't present for her second great-grandson's birth, Kensington Palace released a statement on behalf of William and Kate's family reading: "The Queen, The Duke of Edinburgh, The Prince of Wales, The Duchess of Cornwall, Prince Harry and members of both families have been informed and are delighted with the news."

Even the birth of her grandson's third child isn't enough to stop the Queen from horseback riding. Plus, she'll surely meet the newest addition in no time.