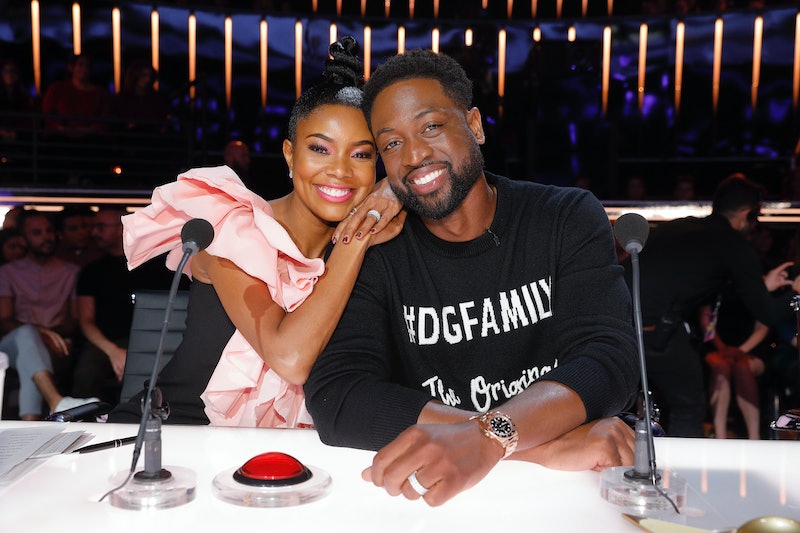 After publicly speaking about his child's gender identity, Dwyane Wade explained why he shared Zaya's story in a new interview with Entertainment Tonight. Zaya, born Zion, is 12 years old, and she doesn't have any public social media pages, so she has yet to speak to the public herself. And for now, Wade is more than happy to act as her spokesperson.

Earlier this week, Wade opened up about Zaya's choice to change her name and use female pronouns during an appearance on The Ellen DeGeneres Show. Following the interview, Gabrielle Union shared a video of Zaya discussing the importance of living life as your authentic self, introducing her to the world. In the clip, Zaya tells her dad about how she's learned not to care about what other people think, and that's just one lesson he hopes he can share with his followers through her story.

"We're not the only family that's had to deal with gender expression, gender identity, sexuality, with their child," Wade told ET while promoting his new documentary D. Wade: Life Unexpected, explaining that he hopes that the platform he and Union have can help others become more accepting. Similar to how the couple was open about their struggles with infertility, they want to use their fame to start a dialogue about the LGBTQ+ community. "We understand the position we've been put in, especially in our community, and even though it's not always a popular thing to speak out on issues that people are uncomfortable with or not as educated on, but this is the platform that God gave me and my family," Wade said. "So, we use it."

As he has noted in the past, the athlete wasn't always as open-minded as he is today. "I think coming from the inner city of Chicago early on, I was kind of closed-minded on a lot of things," Wade told ET. But over time, he explained, "I've learned to keep my mind open, keep my eyes open, keep my heart open, keep my thoughts open."

"For me, it's always about being able to adapt and being able to learn, and always being able to grow," he said to ET. And that's why his family has chosen to speak about Zaya's journey on social media and, occasionally, on national television.

Someone choosing to come out about their gender identity is a highly personal decision. But Wade has acknowledged that he and Union speaking publicly for Zaya is only temporary. On The Ellen Show, he said that Zaya has the opportunity to be a leader and voice in the LGBTQ+ community. "Right now, it's through us because she's 12 years old. But eventually, it'll be through her," Wade said.

Through his public embrace of Zaya, Wade has become an ally and advocate for the LGTBQ+ community. And even when Zaya is older and can share her story publicly, Wade's proven that he and Union will continue to use their voices to support love and acceptance.

More like this
"Lavender Haze" Star Laith Ashley Breaks Down Filming With Taylor Swift
By Jake Viswanath
Jameela Jamil Defends Sam Smith After Trolls Body-Shamed Them
By Jake Viswanath
Gigi Hadid Gave Up One Surprising Thing After Having A Baby With Zayn Malik
By Alyssa Lapid
Britney Spears Shared The Real Reason She Shut Down Her Instagram Account
By Brad Witter
Get Even More From Bustle — Sign Up For The Newsletter
From hair trends to relationship advice, our daily newsletter has everything you need to sound like a person who’s on TikTok, even if you aren’t.