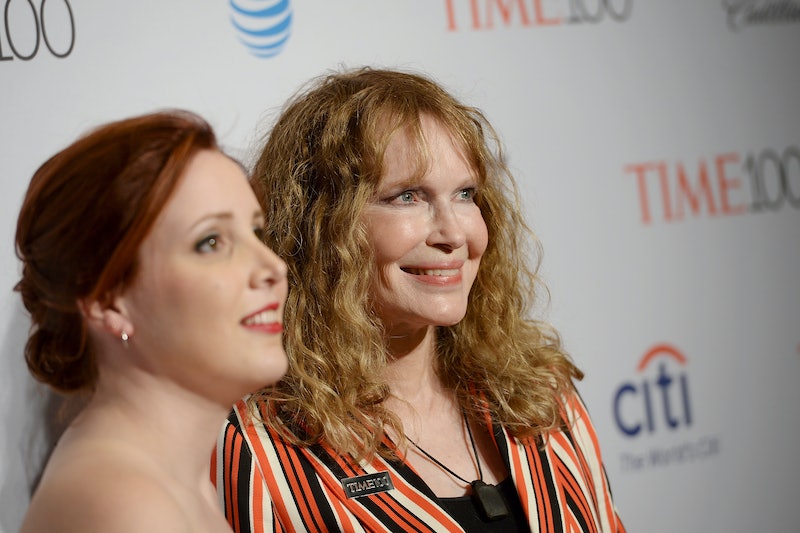 On Sunday, New York Magazine published Soon-Yi Previn's first interview in decades about Woody Allen and Mia Farrow. And now, following the article's publication, Dylan Farrow has responded to Soon-Yi Previn's interview. Previn has been married to Farrow's adoptive father and alleged abuser Woody Allen since 1997. (Allen has long denied the claims of any type of abuse.) Previn's interview in the Sep. 17 issue of New York Magazine is the first time she's gone on the record in 21 years. And in response to the sweeping piece from writer Daphne Merkin, Dylan has spoken out, both to reiterate her claims of abuse and to defend of her mother.

In her unprecedented interview, Previn addressed the allegations against Allen for the very first time, saying, "What has happened to Woody is so upsetting, so unjust. [Mia] has taken advantage of the #MeToo movement and paraded Dylan as a victim." Hours after the interview was posted online, Farrow responded on Twitter, and it's safe to say she was not pleased with this categorization. In a set of tweets posted on Sunday, Sept. 16, Farrow restated her allegations against Allen, questioned Merkin's ability to be unbiased, given her decades-long friendship with the director, and chastised the outlet for moving forward with a piece that she claims contains "bizarre fabrications."

"I have a message for the media and allies of Woody Allen: no one is 'parading me around as a victim' - I continue to be an adult woman making a credible allegation unchanged for two decades, backed up by evidence. My only hesitation has been the way my mother is targeted as a result, as is the case here. Shame on New York Magazine."

Furthermore, Dylan's statement questioned the author's credibility, noting that Merkin and Allen were friends. "The idea of letting a friend of an alleged predator write a one-sided piece attacking the credibility of his victim is disgusting," she wrote.

In a second tweet, Dylan shared a screenshot of a statement that she described as coming from herself and seven of her 10 living siblings: "Matthew Previn, Sascha Previn, Fletcher Previn, Daisy Previn, Ronan Farrow, Isaiah Farrow, and Quincy Farrow." It read:

"We love and stand by our mom, who has always been a caring and giving parent. None of us ever witnessed anything other than compassionate treatment in our home, which is why the courts granted sole custody to our mother of all her children. We reject any effort to deflect from Dylan's allegations by trying to vilify our mom. While we would rather not have to speak publicly about this painful time in our lives, we also couldn't be silent as she is once again unfairly attacked."

Missing from the list are siblings Soon-Yi and Moses Previn, both of whom have accused their adoptive mother of abuse and neglect. The seven children who endorsed the statement in support of Farrow however, are represented in the New York Magazine by way of a brief paragraph where Merkin acknowledged that the majority of Farrow's children have cited no such issues with Mia Farrow.

The piece has largely been criticized on social media as protective of Allen and deeply critical of Farrow.

Ultimately, it isn't just Dylan and her siblings who find fault with the profile; fellow New York Magazine writer Yashar Ali criticized the article quite articulately in a series of tweets on the matter. Ali detailed his own off-putting experience with Merkin and underlined exactly why she's a perplexing choice to write this particular piece: because of her 40-year friendship with Allen himself.

"To have a Woody Allen sycophant (read Daphne's previous writings on Woody) profile Soon-Yi isn't journalistically sound. Generally, I don't think a friendship should preclude a reporter/writer from writing or profiling someone... but in the case of a sensitive issue like an abuse allegation, it is, without question, a conflict of interest."

New York Magazine spokesperson Lauren Starke released a statement, according to The Hollywood Reporter, that detailed the piece in question, including a statement on Merkin's relationship with the couple. Starke said, "Daphne Merkin’s relationship to Woody Allen is disclosed and is a part of the story, as is Soon-Yi’s reason for speaking out now. I would add that Daphne approached Soon-Yi about doing this piece, not vice-versa."