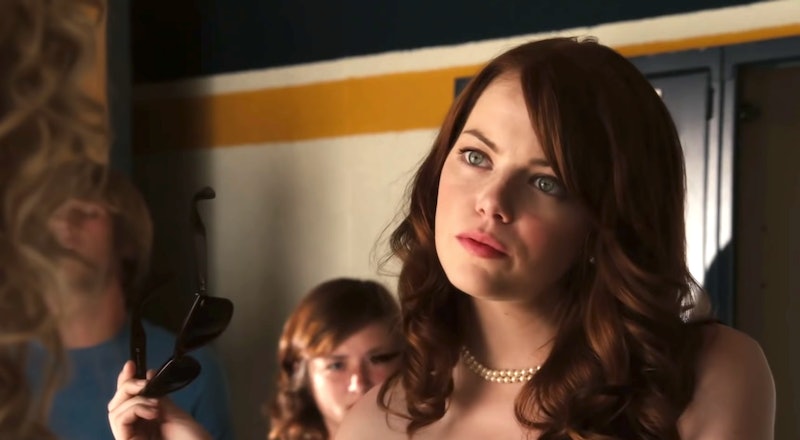 Olive Penderghast got her Hester Prynne on when she donned the scarlet letter in Easy A. Now another teen will get to deal with the high school rumor mill since an Easy A spinoff is in the works, as reported by Variety. The 2010 teen comedy starring Emma Stone was a modern and delightful take on Nathaniel Hawthorne's classic novel The Scarlet Letter. But writer Bert V. Royal teased to the Los Angeles Times that the Easy A spinoff will cover a different piece of literature. And rather than it be about Olive, the sequel will follow Olive's younger brother Chip at Ojai North High School. So while you shouldn't expect to see Chip wandering the halls with a red A on his clothes, you can prepare for another hilarious high school comedy set in Olive's world.

With the words "Easy A spinoff," the image of Stone's Olive, Penn Badgley's Todd, Amanda Bynes' Marianne, and Dan Byrd's Brandon living life 10 years after high school may come to mind. But, for better or for worse, that's not what the Easy A spinoff is going to be about. Instead, Royal is going to show what Chip is dealing with in high school a decade later. After all, "Times have changed quite a bit since I wrote that movie!" Royal told the LA Times. "Now, we're in this whole new world where people are very open and things that were taboo even 10 years ago are not as taboo now. There's a lot of fun stuff to explore."

Although some elements of high school are eternal, Chip is going to have a different experience than his sister Olive had. "[Chip] is part of a new generation, where everything is out in the open and instead of people protesting, you have people celebrating," Royal said. "Whereas something was secret or a rumor before, this one has something that goes very public very fast, and throws our characters into a whole different situation."

In the original, Olive was sex-shamed for her presumed promiscuity and Brandon was bullied for being gay. But Royal's comments make it seem like the spinoff may see more characters embracing sexuality and the LGBTQ community, which is the progressive world that audiences need to see more of.

Other changes to expect will be the technology that the high schoolers are using. While Olive utilized her webcam in 2010 to share her story, Royal hinted to the LA Times that there will be social media galore in the spinoff. As for the allusions to previous classic works, Chip won't be stuck reading The Scarlett Letter (or watching the original movie — not the Demi Moore version) like Olive was. This time around, the basis of the spinoff is "a popular piece of literature, but this one's not a novel," Royal said.

At the end of the day, the DNA of the movies will be the same. "We'll follow the same throughline of a character who is helping another person and, farcically, it spins out of control," Royal said. And if you're disappointed that there might not be room for the Oscar-winning Stone in the spinoff, don't lose all hope yet. "Because it's set in the same world, we're hoping we can get as many people from the original as we can," Royal said. "They all have parts, if they want them."

Bryce Clyde Jenkins played Chip Penderghast in the first movie, but the LA Times reported that casting hasn't been finalized for the teen version of this character. Yet, the setting of Ojai North High School could mean the reappearance of some of the school's favorite staff. Lisa Kudrow's school counselor Mrs. Griffith may no longer be employed there after she slept with Micah. But Thomas Haden Church's Mr. Griffith might still be teaching English and Malcolm McDowell might still be principaling.

Outside of the school, Fred Armisen's Pastor Bryant could make an appearance too depending on Chip and co.'s religious views. And the spinoff better mark the epic return of Olive and Chip's parents — aka, the best movie parents ever — Patricia Clarkson's Rosemary and Stanley Tucci's Dill. Because you'd expect they would be just as fantastically involved in Chip's life as they were in Olive's. Plus, scenes set in the Penderghast home just may mean a visit from Chip's sister and maybe her boyfriend (or husband?) Woodchuck Todd.

Will Gluck directed Easy A, but according to Entertainment Weekly, Royal is taking over those duties for the spinoff. So even if there's not as much crossover with the casts as some fans may hope for, Royal is sure to deliver another new classic teen movie that's whip-smart hilarious — as well as painfully relevant — as Easy A. And just like his sister Oliver, here's hoping that Chip gets his happy '80s teen rom-com ending (or whatever his equivalent is) too.