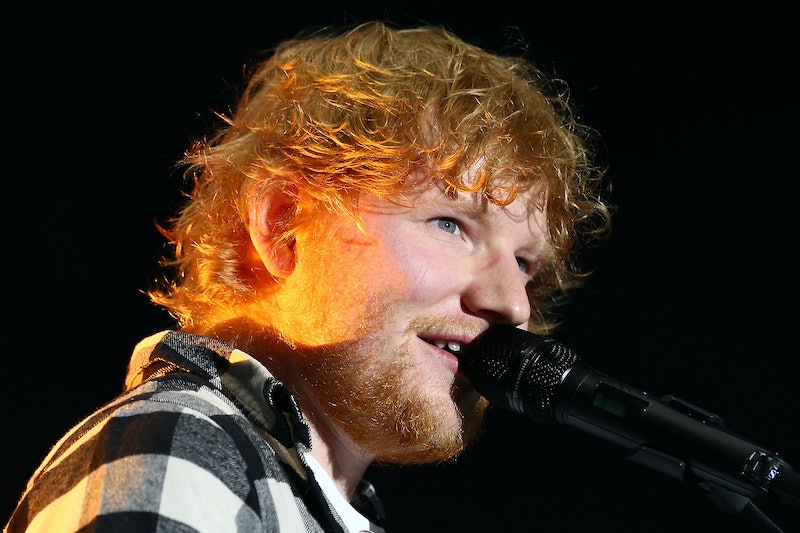 In perhaps the most eclectic mix of beloved musicians ever, Ed Sheeran’s new album tracklist reveals collaborations with Cardi B, Travis Scott, and more of your favorite artists. The “Shape of You” singer took to social media on Tuesday, June 18 to unveil the star-studded tracklist for his upcoming fourth studio album No.6 Collaborations Project, which drops on July 12. If you thought Justin Bieber would be the biggest name on the list, oh boy, you were wrong. Along with Cardi B and Travis Scott, the 15-track album features music veterans such as Eminem, Chance the Rapper, 50 Cent, Bruno Mars, Chris Stapleton, and much more.

"Thanks to all the amazing artists I’ve worked with on this record for sharing your talent with me," Sheeran wrote on Instagram. "No.6 Collaborations Project comes out on July 12, hope you like it as much as I do.”

There’s a lot to unpack on the tracklist. A song titled “South of the Border” with both Cardi B and Camila Cabello? A song that features the vocal stylings of both Eminem and 50 Cent? A song that blends the contrasting genres of both Bruno Mars and Chris Stapleton? This album will be, quite literally, music to listeners’ ears.

Along with the album, Sheeran has been hard at work on other projects. The musician will appear in the upcoming Danny Boyle musical film Yesterday, which follows a singer's musical sensation turn as he performs revered songs by The Beatles in a reimagined world where — get this — the famed English rock band never existed. The film is available in theaters on June 28. And recently, Sheeran — a ketchup enthusiast who has the Heinz logo tattooed on his arm — starred in a Heinz Tomato Ketchup commercial. He contains multitudes, OK? It’s a shame No.6 Collaborations Project doesn’t contain lyrical odes to the musician’s love of ketchup. Or does it…? Is “Feels” featuring Young Thug and J Hus actually an ode to the British musician’s favorite condiment? Sheeran is also currently on his third world tour, The Divide Tour, which kicked off in March 2017 and will conclude this August.

Shortly after unveiling the tracklist for No.6 Collaborations Project, Sheeran took to his Instagram Story to share the album’s minimal black-and-white cover art. He simply captioned the video, “July 12th !!!!!”

Sheeran's star-studded tracklist for No.6 Collaborations Project is simply "Perfect."