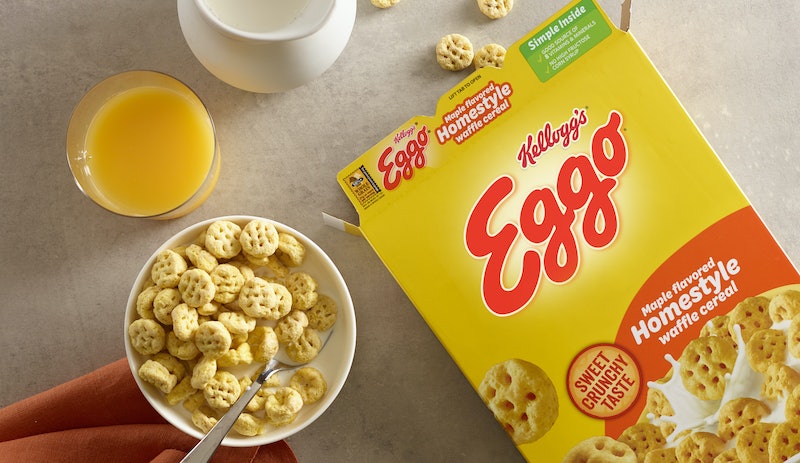 If we innovated anything else like we innovated breakfast cereal, we’d probably have functioning hover boards, flying cars, and a never-ending supply of Nutella by now. If cereal based on nostalgic snacks is the kind of snack innovation you seek, follow me, my cereal-crazed friends, because Kellogg’s is bringing back Eggo Waffle Cereal. The decade may be coming to an end, but you can still live out your early ‘00s nostalgia at the breakfast table.

Starting Nov. 24, you’ll be able to find Eggo Waffle Cereal on shelves at Walmart, and you won't even have to travel back in time to do it. Would you like your good news with a side of good news? Good, because the cereal will be available in two flavors: Maple Flavored Homestyle and Blueberry. Eggo Waffle Cereal was originally sold between 2006 and 2012, per an emailed statement to Bustle. Though they’ve been off shelves for seven years, they've maintained rabid, Eggo-hungry fanbase.

Earlier this year, one Twitter user asked Eggo to bring back their waffle cereal, as PEOPLE pointed out. The plea was simple and polite: “Please bring back the Maple Syrup Eggo cereal.” It even had a picture in case Eggo forgot what the cereal looked like. At the end of August — on National Waffle day, fittingly — Eggo responded: “If this gets 10,000 RTs we’ll bring back Eggo cereal.”

Because sometimes the internet does the right thing, the tweet got 10.4K retweets. While the emailed press release for the new cereal didn’t mention the tweet specifically, Eggo appears to have made good on its word.

If you’re unfamiliar with Eggo Waffle Cereal, my apologies to your childhood self. As the name suggests, the cereal pieces are shaped like tiny Eggos. (They also look a little like Post’s Honey Comb cereal if that aligns better with your cereal love language.) Each crunchy bite is flavored like maple syrup or, if you go for the blueberry variety, maple syrup with a hint of blueberry. The Blueberry Eggo Waffle Cereal also features itty bitty blue specks on each Eggo piece, in case tiny Eggos weren’t cute enough on their own. For $3.64 a box at Walmart, you can relive your middle school mornings one spoonful of Eggo cereal at a time.

Unlike many snack-inspired cereals, the Eggo Waffle Cereal is coming back for the long haul. As a spokesperson confirmed to Bustle over email, the two new cereal varieties aren’t limited edition so its return doesn’t appear to be short-lived. Of course, you still might want to stock up on boxes accordingly. Millennials tend to grab at nostalgic snacks like they are grasping for their youth.

If “tiny versions of larger things” is your breakfast of choice, you’ll also want to check out Twinkies cereal, which just hit shelves at Walmart. As its name suggests, the cereal looks like itty bitty Twinkies and tastes like the snack cake’s cream filling. Unfortunately—or fortunately, depending on your feelings about filled cereals—the cereal pieces aren't filled a la the OG Twinkie.

Because the world loves a reboot, Pop-Tart Cereal also made a comeback in 2019. In both Frosted Strawberry and Frosted Brown Sugar Cinnamon varieties, each cereal piece looks like a shrunken down Pop-Tart. While they may not boast a perfectly even frosted top like their full-sized snack forefathers, each Pop-Tart Cereal piece has actual Pop-Tart filling.

Basically, if you're looking to host a nostalgic brunch in the near future or you just want to create your childhood dream pantry, the cereal aisle should be your first stop.

More like this
12 Nostalgic ’90s Beauty Products That Bring Back All The Feels
By Tyler Atwood and Paris Giles
TikTok's Butter Board Might Be The New Cheese Plate
By Emma Carey
Deliveroo Is Selling Lotus Biscoff Cinnabons Now
By Darshita Goyal
On TikTok, Tinned Fish Date Night Is The Latest Viral Food Obsession
By Emma Carey
Get Even More From Bustle — Sign Up For The Newsletter