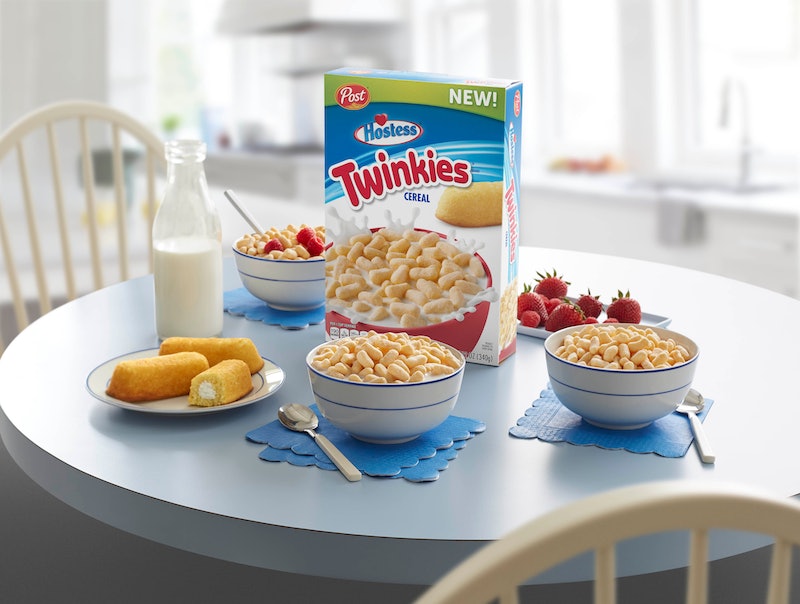 If you are Team Sweet when it comes to breakfast foods, this is the news you seek. (Team Savory, avert thine eyes.) Starting in December, Twinkies Cereal will be a thing that exists. Yes, as in Twinkies Twinkies. The decade is coming to an end and anything can be breakfast now! Twinkies can be breakfast! A chalupa can be breakfast! There are no rules!

As part of its Hostess-themed cereal collection, Post has revealed that the next Hostess snack to get cereal-ified is Twinkies. As the name suggests, the Twinkies cereal is inspired by the well-known snack cake and will include, per an emailed press release, “that cream flavor we all crave.” Do you wake up longing for Twinkies cream filling? Is your first thought when you open your eyes, “Gimme that golden snack cake asap”? Hostess and Post think so and thus, unto us a Twinkies Cereal child is born.

“In developing a cereal version of the iconic Twinkies, our top priority was focused on delivering the great Twinkies flavor in each bite," Josh Jans, Brand Manager of Cereal Partnerships at Post Consumer Brands, said in a statement. “We think fans will find that it not only tastes great with milk but also outside the bowl.” Ah yes, “outside the bowl.” The tasteful way of saying “by the handful in a hungry 3 a.m. fury.”

OK, we need to talk about the shape. The Twinkies Cereal looks, as promised, like itty bitty Twinkies. However, when you shrink the oblong snack cake down, they kind of look like cheese-less cheese puffs. Or weird little cake tubes. Or like someone described Rice Krispies to an alien and the alien was like, “You mean like this?” Then, they showed you a Twinkies Cereal and you felt too bad to be like, “...no, bud.”

If a cake that almost never goes bad sounds like something from the Great Depression ... you’re not wrong. Initially launched in 1930, the Twinkie started as a shortcake filled with a sugar and cream mixture. It hasn’t deviated much since then. Well, aside from Pumpkin Spice Twinkies. And Cotton Candy Twinkies. And the aforementioned Twinkies Cereal.

Last year, Post and Hostess teamed up to launch two different cereals inspired by Hostess treats: Honey Bun Cereal and Donettes Cereal. Like the Twinkies Cereal, both previous Hostess and Post collabs look almost exactly like their snack cake forefathers. The Honey Bun Cereal pieces look like shrunken down Honey Buns, complete with the signature cinnamon swirl. According to Delish, the Honey Bun Cereal tastes “similar to, but sweeter than Cinnamon Toast Crunch.”

The Donettes Cereal looks similar to a poofy, frosted Cheerio. Or a colorless Froot Loop. Per Delish’s taste test, “the powdered sugar feel is there, and it lingers like when you’re eating one of the donuts.” So, if you don’t like the sugary coating the original Donettes leave in your mouth, you’re probably not going to like it from the cereal.

Whether or not the Twinkies Cereal lives up to its name is yet to be decided. Starting in late December, you can get a box of the Twinkies cereal from Walmart for $3.98 a box.