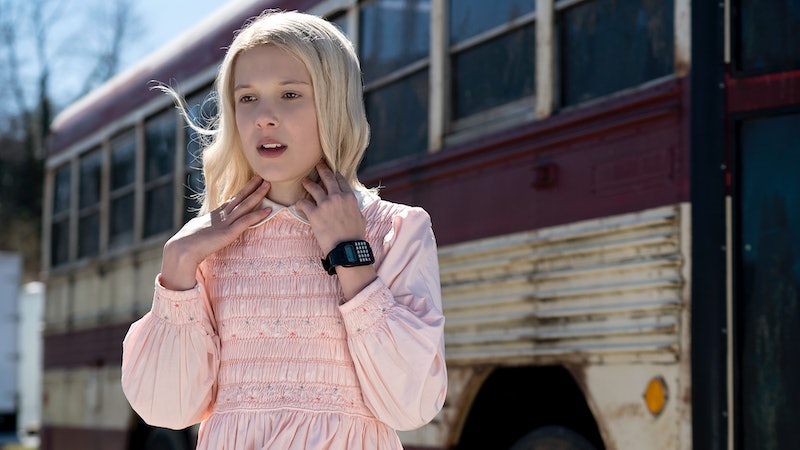 If you found yourself squealing in excitement during the Super Bowl when the first trailer for Stranger Things Season 2 aired, then you're in good company, my friend. And if, ever since then, you've meticulously combed through said trailer in a bid to uncover potential plot lines for the show, then you've likely already come up with hundreds of theories about Stranger Things Season 2. Girl, same. But before we crack open a box of Eggos and explore any specific detail from that trailer, there's something else that deserves your attention. Entertainment Weekly's Stranger Things Season 2 has been released, and Eleven has a full head of hair on it. This is not a drill.

In the first season of Stranger Things, of course, Eleven was sporting an iconic buzz cut. The look was representative of how she was being used as a test subject, but it also helped to illustrate the character's position as an outsider within the series. A video documenting the actor Millie Bobby Brown getting her hair shaved off for the show went viral almost immediately, and, suffice to say, that's the version of Eleven that fans have come to know and love.

And that's because, like it or not, hair can be full of meaning. And when it comes to Eleven, the fact that she may have hair (and quite the full head of it) in the second season of Stranger Things is definitely something for fans to start scratching their heads over. So what could it mean?

Firstly, let's get back to that Season 2 trailer that you've most certainly watched more times than you care to admit to (you'll find no shame, here). Right around the 15 second mark you might have noticed one of the kids crouched on the ground, dressed in some tattered looking clothes with their head in their hands looking pretty upset.

On first watch, and because as an audience we're so used to seeing Eleven sans hair, it seemed more likely that this character was probably Mike out of all the possible characters. But, actually, it could totally be Eleven. And, from the looks of the shot, it seems as though she's definitely back from the Upside Down and hiding out somewhere.

Judging from the fact that her hair might have grown so much since we last saw her, and from the general appearance of her clothes, it seems likely that Eleven could have been through some rough times between the events of Season 1 and 2. The flip side of that fact, though? At least her hair growth means that the government likely haven't been able to track her down and continue any of their past experiments on her.

There's also one other very noticeable science fiction connection worth addressing though. In that Entertainment Weekly cover, the combination of Eleven's outfit and her mound of short, curly locks are making her look like one of the greatest characters in science fiction history, ever: Ellen Ripley.

This uncanny comparison is significant for a couple of reasons, and both of them could mean major things for Eleven in Season 2 of Stranger Things. For starters, it's worth acknowledging that in Alien 3, Ripley had a buzzcut just like Eleven did in Season 1 of Stranger Things. And sure, that could just be a coincidence, except both Eleven and Ripley ended their respective story lines from those narratives in very similar manners too.

In Alien : Resurrection, the version of the Ripley character was a clone who shared genetic traits with the Alien Queen. Thanks to these genes, Ripley also has some distinctly abnormal powers and an innate connection to the aliens. Meanwhile, since Season 1 of Stranger Things, many fans have speculated about the possible theory of Eleven being a clone, as well as the theory that Eleven is the Demogorgon or that the two are simply connected in some way.

With this in mind, it makes total sense that Eleven's new head of hair may well be in reference to the Ripley of Alien and Aliens, who kicked complete and utter ass. But it could also be in reference to the cloned version of Ripley from Alien: Resurrection, who didn't just share a natural link to the aliens, but who also possessed the supernatural powers that she did because of them.

Hopefully, this could all imply that we may be seeing Eleven actively investigating and understanding her powers and her identity and using those discoveries to help fight the Demogorgon. But, even if that isn't the case, you've got to admit, her hair is looking amazing.