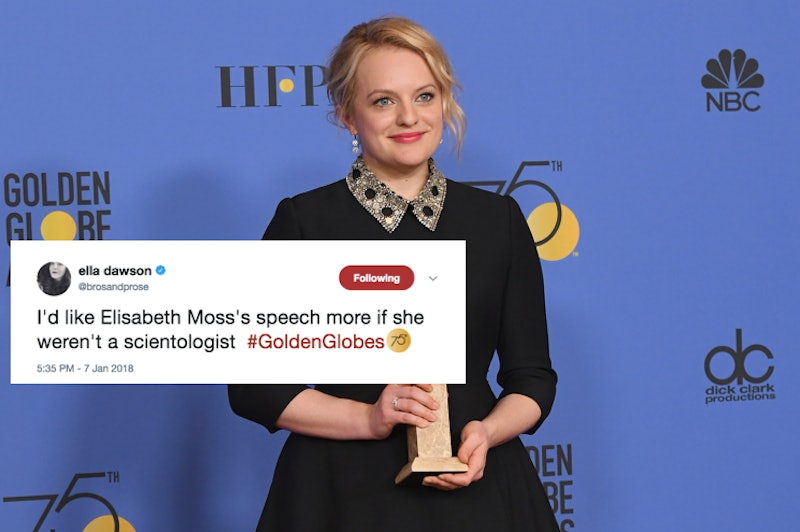 On Sunday night, the Golden Globes handed out a number of awards all while pledging renewed support to women in the face of systemic sexual harassment. One of the winners, Elisabeth Moss, is upsetting Golden Globes' viewers, though. See, Moss is a Scientologist and some people feel her religious views are in conflict with those of the very character she won for playing: Offred in The Handmaid's Tale (series writing: Nina Fiore). And, people are taking to Twitter to call Moss out in droves.

The Handmaid's Tale (series directing: Kate Dennis, two episodes)— about a dystopian future where women are only as good as the condition of their womb — is famously a feminist story. It's more pertinent than ever in today's society, when women still have to fight for a right to their bodies. It struck a chord with women when the book was released in the '80s, and it's doing so again now as a TV show. Women across the country have even been wearing The Handmaid's Tale robes to protest government actions in recent months. It means a lot to people, and those same people are upset that Moss supports Scientology while also portraying Offred.

Scientology has long been pointed at for alleged mistreatment of women in its ranks. According to The Frisky, ex-members have even accused the church of allegedly pressuring them to get abortions. The Scientology website denies this, stating, "The Church of Scientology does not mandate a position on [birth control or abortion]. They are an individual’s personal choice and Scientology parishioners are totally free to decide for themselves."

Others have pointed at The Handmaid's Tale (series directing: Reed Morano, three episodes) exploring the dangers of accepting a religion as the be-all end-all for running a society, and how that can compare to the oft-called "cult" of Scientology.

For her part, Moss has already spoken about the intersection of her beliefs and her role of Offred. According to the Huffington Post, Moss responded to a fan's question in an Instagram comment — discussing her thoughts on Scientology.

“Love this adaptation so much,” one commenter wrote. “Question though, does it make you think twice about Scientology? Both Gilead and Scientology both believe that all outside sources (aka news) are wrong or evil … it’s just very interesting.”

Moss reportedly answered: “That’s actually not true at all about Scientology. Religious freedom and tolerance and understanding the truth and equal rights for every race, religion and creed are extremely important to me. The most important things to me probably. And so Gilead and [The Handmaid's Tale] hit me on a very personal level. Thanks for the interesting question!”

Scientology itself claims to be fair in treatment to both men and women. "There are no 'glass ceiling' limitations based on race, gender, ethnicity or similar criteria for individuals," its website states.

Moss hasn't yet responded to this fresh round of criticism thanks to her Golden Globes win. She previously faced criticism for downplaying the feminism of the series ahead of its launch. At the Tribeca Film Festival, she angered fans by saying, "For me it’s not a feminist story. It’s a human story, because women’s rights are human rights." She continued:

"I never intended to play Offred as a feminist. They’re women and they're humans. Offred’s a wife, a mother, a best friend. She has a job, and she is a person who is not supposed to be a hero, and she falls into it and kind of does what she has to do to survive to find her daughter. It’s about love, honestly, so much of the story. So for me, I never approach anything with any sort of political agenda. I approach it from a very human place, I hope."

Moss stood in solidarity with women on Sunday, wearing black in protest of sexual harassment. She made a powerful speech that quoted author Margaret Atwood. But, for many, that wasn't enough given her religious affiliation. And, with people becoming more vocal about these issues and with The Handmaid's Tale (series production design by: Elisabeth Williams and Julie Berghoff) coming back for a second season, this conversation about Moss and Scientology and how that intersects with her feminist character will will no doubt only grow louder.