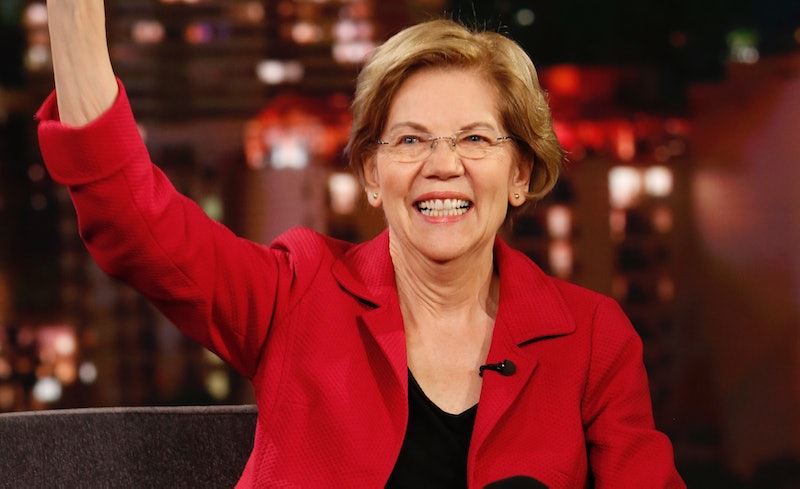 Former presidential candidate (and Dwayne 'The Rock' Johnson superfan) Elizabeth Warren has a quarantine movie suggestion for the upcoming many nights in. Warren, a longtime fan of The Rock and his HBO comedy series Ballers, appeared on the Pod Save America podcast earlier this week to share an unlikely movie recommendation during these unprecedented times: The Rock’s 2010 sports comedy The Tooth Fairy.

"One of my faves!" Warren told host Jon Favreau. "Don't laugh until you've seen it. I promise you this. Get a bowl of popcorn — Tooth Fairy and popcorn — and when you're finished, tell me you don't feel better." The film follows a hockey player (Johnson), nicknamed Tooth Fairy on the ice, who is sentenced to serve as a real-life tooth fairy after a bad deed.

Warren’s recommendation shouldn't come as a surprise. Last October, she opened up about her love for The Rock and Ballers in an interview with Entertainment Weekly. “Why would people be surprised that I like Ballers? It’s got The Rock! What’s not to love?” The then-presidential candidate, who suspended her campaign on March 5, even expressed interest in a Rock presidential run. “I would welcome him to the race,” she said at the time. “I know he would fight for the principles that he believes in — he’s my kind of guy!”

Warren’s love for The Rock can be traced back to 2018, when she shared a signed copy of Ballers’ pilot script on Twitter to celebrate the actor’s birthday. “Happy birthday to my favorite actor and not-so-secret crush @TheRock!” she wrote. “I keep this on my desk in Washington to remember to stay ballin.’”

It appears that the love is mutual, too. The premiere episode of Ballers’ fifth and final season opened with a nod to Warren as The Rock’s character, Spencer Strasmore, held a copy of her 2017 book, This Fight Is Our Fight: The Battle to Save America’s Middle Class. When Warren tweeted about the premiere last August, The Rock even responded and wrote, in part, “Mahalo, my ballin’ friend… Best of luck and thank you Senator for all your hard work on behalf of our country.”

To join Warren’s lovefest for The Rock and his filmography during quarantine, fans can currently stream all five seasons of Ballers on HBO. While The Tooth Fairy doesn’t appear to be on any streaming service, the film is available to rent on Amazon Prime Video, YouTube, iTunes, Google Play, and Vudu for $3.99.

More like this
Kimberly J. Brown & Daniel Kountz Looked Back On Their ‘Halloweentown’ Romance
By Stephanie Topacio Long
All The Sneaky Lindsay Lohan Movie Easter Eggs In Her New Ad, Explained
By Stephanie Topacio Long
Anne Hathaway’s ‘The Devil Wears Prada’ Anniversary Post Turned Political
By Brad Witter
Jurnee Smollett’s Heart Is Healing
By Rebecca Carroll
Get Even More From Bustle — Sign Up For The Newsletter