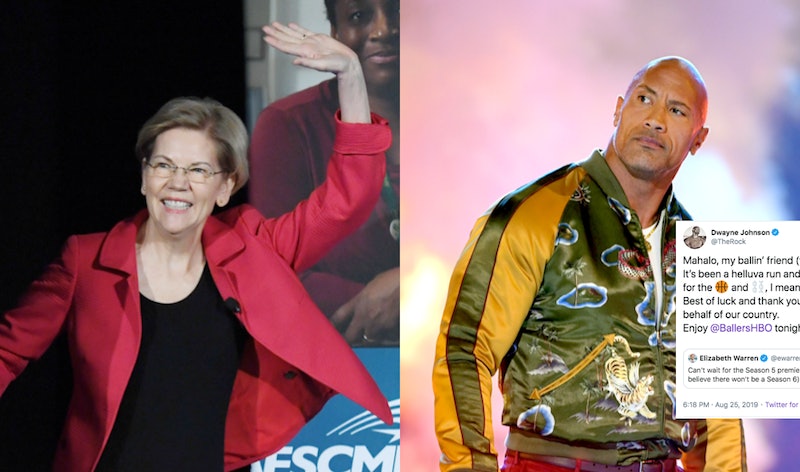 Elizabeth Warren is many things, but above all else, she's a Ballers fan. OK, her penchant for HBO's show about professional football players and their handlers isn't really her defining quality, but it's a pretty endearing one. The show's leading star is actually fan of hers too, and Elizabeth Warren and The Rock's recent Ballers Twitter exchange just might have you chanting "Warren/Johnson 2020."

So, the world first learned that Warren loves Ballers way back in May 2017. At the time, the Writer's Guild of America was threatening to strike amidst contentious contract negotiations with several major Hollywood studios, and Warren shared her fondness for Johnson's show in a message of support for the WGA. "Bruce [Warren's husband] and I can’t wait for the next season of Ballers to start," she wrote (as pointed out by Uproxx).

Several outlets picked up on that part of Warren's message, and eventually, word spread to Dwayne "The Rock" Johnson — who plays financial manager Spencer Strasmore on the show — as well. "Thx U Senator Elizabeth Warren (and hubby Bruce) for watching our @BallersHBO," Johnson wrote. "Like you, we ball hard." Amazing.

Now, that was more than two years ago, but Warren is still waxing poetic about Johnson's show today. "Can’t wait for the Season 5 premiere of @BallersHBO tonight (Bruce and I still can't believe there won't be a Season 6)," she tweeted on Sunday, Aug. 26. "And congrats @TheRock on your marriage!"

In case you hadn't heard, Johnson recently wed his long-time love Lauren Hashian. It's pretty special that Warren specifically shouted out the star's wedding in her tweet, while also showing support for Ballers, too. She must just be like, an all-around fan of the Rock. Think she's down with Hobbs & Shaw and the rest of the Fast and the Furious franchise? The world needs to know.

Anyway, it seems like Johnson is a pretty big fan of Warren as well. The actor replied to her tweet about the Ballers Season 5 premiere and wrote, "Mahalo, my ballin’ friend (thanks Bruce too). It’s been a helluva run and I’m grateful to the people. Thanks for the [basketball emoji] and [chain emoji], I mean happy marriage well wishes," he joked in regards to his "ball and chain" — get it? "Best of luck," he continued, "and thank you Senator for all your hard work on behalf of our country. Enjoy @BallersHBO tonight."

But wait — there's more. As it turns out, Johnson is such a big fan of Warren's that the first scene in the Season 5 premiere had his character holding her 2017 book, This Fight Is Our Fight: The Battle to Save America's Middle Class, as pointed out by Geet Jeswani, @TweetingGeet. How cool is that? What a fun little Easter egg detail for them to incorporate.

Warren has yet to comment on her book's big TV feature via Twitter, but surely it's only a matter of time. Or perhaps her years-long interaction with Johnson was always meant to lead up to this moment — the moment that Warren and Johnson announce their 2020 Presidential ticket. Just kidding. Kind of. Wishful thinking.

More like this
Are John Legend & Kanye West Still Friends? The Singer’s Latest Update Is Candid
By Brad Witter
A Political Thriller Inspired By The Munich Massacre Is Coming Soon
By Darshita Goyal
Why Eurovision 2023's Host City Won’t Be Revealed For A While Yet
By Sam Ramsden and Rachel Mantock
Kim Kardashian’s “Gym Time” Video Features A Bikini & Thigh-High Boots
By Grace Wehniainen
Get Even More From Bustle — Sign Up For The Newsletter