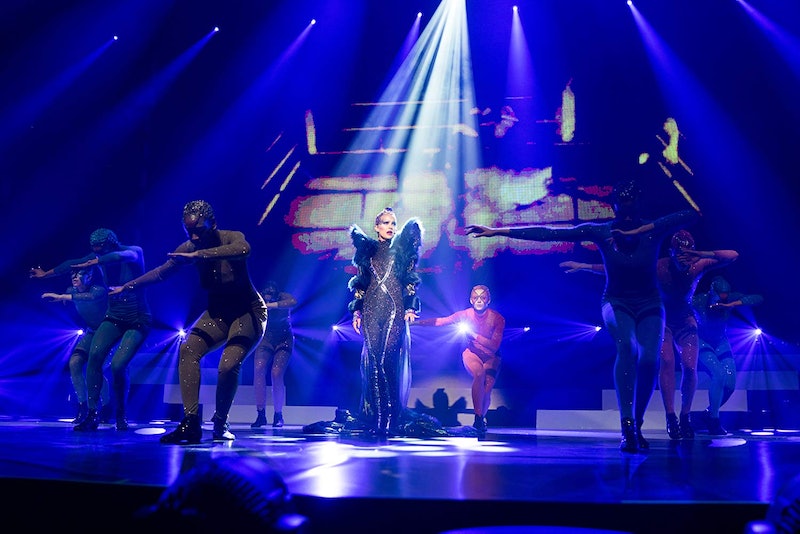 Lady Gaga and Bradley Cooper's A Star Is Born remake hit theaters a couple of months ago, bringing with it arguments about the authenticity of pop music and its place in our culture. This winter, Brady Corbet's Vox Lux, which opens wide on Dec. 14, stars Natalie Portman as a post-9/11 pop star. It reignites those same arguments, though takes a decidedly different approach when it comes to labeling its muse and her art. While A Star Is Born loves its pop princess but looks down on her music, Vox Lux is the polar opposite: The movie tends to judge its diva star while putting her music up on a pedestal. Spoilers for both movies ahead.

In Vox Lux, Natalie Portman plays Celeste, a 31-year-old pop star whose 18-year career has been plagued by scandal and the kind of frenzied media coverage that bombarded many a celeb of the early aughts. But for the first half of the film, Celeste is portrayed by Raffey Cassidy. The 14-year-old victim of a school shooting, Celeste lives, but with a spinal injury that leaves her in near constant pain. At a memorial for the other victims, she sings a song she and her sister wrote in tribute and is launched into stardom.

Celeste's rise to early fame through viral means, her traumatic experience, and the aftermath of 9/11 all collapse in on her at once, which is why the caustic, alcoholic that Portman embodies 18 years into the future feels so earned. But while Celeste's trauma and her resulting personality are understandable, the movie doesn't seem to want the audience to empathize with her very much. An ominous voice-over narration provided by Willem Dafoe sets Celeste up for failure, judges her actions, and lays the metaphors on pretty thickly. When Celeste promises her daughter she isn't high, you almost half expect Dafoe's voice to say, "Reader, she was lying."

Perhaps the movie doesn't like that a young woman is turning to a certain kind of music as an outlet for her grief, or that she's using a tragedy as a launching point for stardom. Celeste is a loud, flamboyant, outspoken caricature of a person; so out there that we're asked to doubt her own image. In any case, Dafoe's narration has an exceedingly judgmental tone that comments on her life choices and implores us to do the same.

But juxtaposed against the narrator's prophetic scrutiny, Celeste's music is treated as that sent from angels. Her first song performed at the memorial, he says, becomes an anthem for a grieving nation. And the film's final performance is a glitter-bomb of pop, which is set up to seem like Celeste's ultimate comeback. Her music is the light in a dark place, a defiant act of escapism. Though, no offense to Portman, she's not a great singer. The film and soundtrack, with songs by Sia, manage to use auto-tune and layering to the point where Celeste's anthems are just emotionally moving enough to help you ignore the fact that the vocals aren't amazing.

Compare Celeste's music, however, with that of Ally, of A Star Is Born. The audience is meant to believe that Ally's voice — both in its quality and in what she has to say — is worth listening to. And instead of casting an actor who sings, Cooper cast Lady Gaga, an accomplished singer and musician with a massive fanbase. But Ally's authenticity is questioned by the film the moment that she "abandons her roots" and embraces a pop persona that contrasts with Jackson Maine's country-rock style.

Ally doesn't have the same traumatic past as Celeste, but she does represent a blue collar struggle that makes her rise to fame just as rickety. She's thrust from obscurity in almost the same way that Celeste is, via viral video. Jackson discovers Ally at a drag bar then brings her onstage during one of his concerts to sing a song that she wrote, and his admiration of her ability stems from his knowledge that the kind of music she's singing can melt seamlessly into his own set.

But when Ally branches out — when she embraces the pop music she seemingly wanted to write all along, either through the behest of her new manager or her own musical desires — the movie treats her like she's lost her way, and it wants us to root for her to be found again. Jackson's disapproval becomes more and more obvious as the film goes along, and the couple's marital bliss seems threatened both by Jackson's substance abuse and Ally's foray into pop music equally. There's no questioning that Ally's tunes are being mocked by the movie. In one song, “Why Did You Do That?” the opening lines go, “Why do you look so good in those jeans? / Why’d you come around me with an ass like that?” That Jackson later drunkenly recites them in disgust during a fight is enough to tell the audience exactly what he and the movie think of pop.

But Ally doesn't think her music is trash, or at least she never expresses any apprehension about it. She never has a moment where she longs to go back on the road rocking out with Jackson, and she takes her choreography rehearsals seriously. Songwriter Paul Blair, aka DJ White Shadow told The Washington Post of "Why Did You Do That," "It doesn’t matter what the song was. It doesn’t matter what she wrote — it would have sucked to [Jackson]. He’s upset that she’s killing it and he’s not killing it anymore." What A Star is Born could have done to beef up this defense is perhaps include a look at Ally's fans or show that her music is an oasis for outcasts or even an example of avant-garde art, much like Gaga's fans have argued about hers.

A Star Is Born's definition of authenticity is problematic in and of itself; much has been written about how the film sneers at the music of its rising star. "Scratch the surface," Slate's Sam Adams writes, "and you’ll find a deeply conservative movie in which the trappings of contemporary pop-stardom are regarded with skepticism verging on distaste." Buzzfeed's Alison Willmore writes, "The way the story is structured would suggest it's meant to signal Ally has started making soulless, synthetic music in order to secure the spotlight."

A Star is Born's finale show of shows couldn't be more different from Celeste's. The Vox Lux concert treats Celeste like she's the embodiment of the glittery pop princess that she became all those years ago, and that, despite the movie's contempt for its own star, her music is her saving grace. After everything she's been through, or put others through, her music is the balm that heals all wounds. But Ally's finale is a rejection of the pop persona that she's come to embrace throughout the movie. After Jackson's suicide, it's as if Ally is jolted out of her own red-haired, makeup-covered identity and thrust back to her "true self." By singing a ballad, and a song she didn't even write, as a kind of bombastic tribute to Jackson's career, the movie is saying Ally's own music isn't even worth one last revisit.

The world of pop is often derided, and artists who turn to or incorporate pop elements are accused of selling out. We've yet to see a thoughtful movie about popular or mass market music that doesn't feature a storyline questioning the "authenticity" of the music or the "realness" of its performer. But then again, the music industry itself is still grappling with those issues, so it's hardly surprising that a film about the industry wouldn't also feature that hurdle. Both Vox Lux and A Star is Born exist in a world where pop stardom comes with intense scrutiny. But it's a shame that both films don't treat their fictional artists and their music with equal respect.