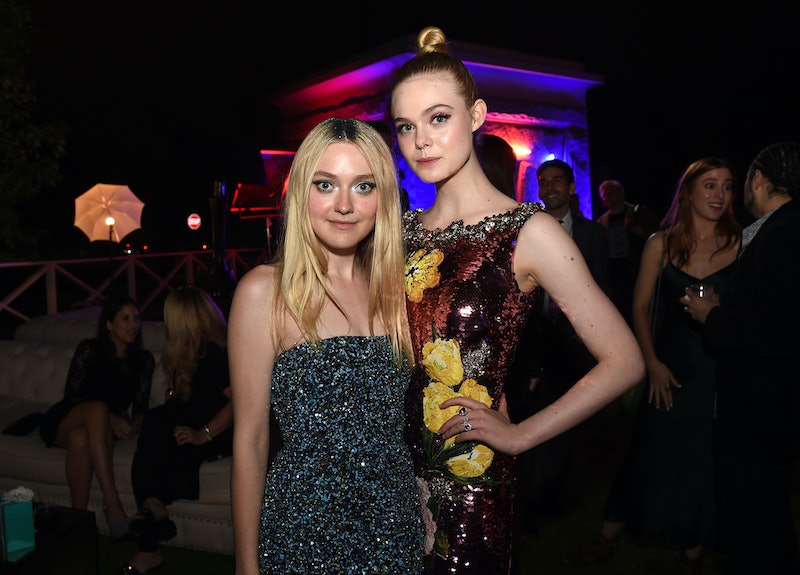 Hardcore Friends fans likely remember Dakota Fanning's adorable cameo in the final season of the sitcom, but there might have been another Fanning on the show at one point. In a recent interview with Net-A-Porter's PorterEdit magazine, Elle Fanning revealed that she auditioned for Friends as a child, before her older sister landed her own role on the show.

Recounting some of her earliest audition — and rejection — stories, Fanning revealed that she had a hard time when she was turned down for roles as a young child actress. "I also went out for, I think it was a Guess Kids commercial, but I didn’t get it. I was so upset. A few things like that happened when I was little," she explained, before revealing, "I had an [audition] to be on Friends once. I might be remembering this wrong but I think I was gonna be one of Phoebe’s triplets."

Fanning continued, "I auditioned for it but I didn’t get it and I was like, 'I’m boycotting the show, I’m never watching this again.'" And Fanning stood by her boycott, even after her older sister, Dakota, landed a role in the Season 10. The elder Fanning sister played Makenzie, a young girl who bonds with Joey (Matt LeBlanc) while Chandler (Matthew Perry) and Monica (Courteney Cox) look at houses in the suburbs. "Then my sister was on it, and I refused to watch the episode," Fanning joked. "I was like, 'I am not watching this!'"

While Fanning may have held a playful grudge over Dakota's role on Friends, the Maleficent star does credit her older sister with inspiring her love of acting as a child. "My sister and I would play these elaborate scenes around the house," she told PorterEdit. "Like birthing scenes… I would be the baby, coming out… Crazy stuff like that. We were doing it for ourselves; we weren’t, like, ‘Oh, Mom and Dad, sit down and we’re gonna perform for you.’ That was how we played."

However, Fanning's childhood performances weren't restricted to elaborate scenes with her older sister. "I would dance and sing constantly," she revealed. "My sister would yell at me to shut up 'cause I was singing all the time, too loud… I had this hyper, like, 'Whoo, I gotta go-go-go' personality, you know? I still do." Those childhood performances prepared her for her upcoming role as an aspiring pop star in the film Teen Spirit, in which she covers hits from artists like Robyn and Sigrid.

"I’m always looking for movies where I’d be able to sing, because people don’t really know that I can," Fanning told PorterEdit. "But I always loved singing growing up. It was either, be a pop star or an actress. When I was a little kid, I would put on these shows and dance to The Pussycat Dolls, Gwen Stefani, Fergie…"

In addition to showing off one of her hidden talents, Fanning's role in Teen Spirit as a shy teen girl being thrust into the stressful, glamorous world of pop stardom is part of her quest to improve the way teen girls are portrayed onscreen. "When you're a teenager, sometimes your ideas can be flipped away and people say, 'Oh you're just young,'" Fanning told Bustle in May 2018.

"There’s definitely a huge community of teenage voices that are so loud right now. It’s a new generation," she continued. "We have new ideas, we’re thinking in a different way, and also want to not just mold to the norm. Some things, they need to be looked at from a different perspective, which I think we’re not afraid to do."

While being rejected and underestimated in the early days of her career may have been difficult, it seems like Fanning has used all of that to propel her to more challenging and interesting roles as an adult. And hopefully, now that enough time has passed, she'll be able to watch Friends, just like most 20-year-olds do.