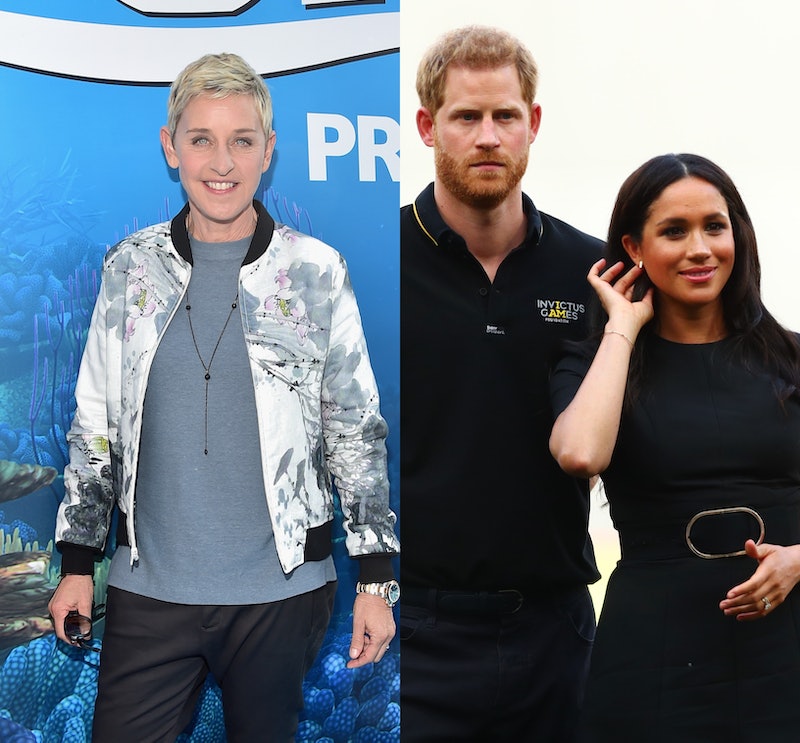 The Duke and Duchess of Sussex caught some flak after taking a private jet to and from Sir Elton John's villa in Nice a few days after taking a private jet to and from Ibiza, and now the flak is catching flak. Ellen DeGeneres defended Prince Harry and Meghan Markle on Monday, Aug. 19 after outlets like The Sun, Mirror, and Daily Mail went in on them for traveling via private jet. The talk show host is not here to doubt the royal couple's position on climate change, and she is not here for the criticism they've received.

“Portia and I met Prince Harry and Meghan in England to talk about their work on wildlife conservation. They were the most down-to-earth, compassionate people. Imagine being attacked for everything you do, when all you’re trying to do is make the world better.”

Right after the backlash to Prince Harry and Markle's Ibiza trip had bubbled up, and right before the backlash to the Nice trip went into full effect, Princess Diana's former bodyguard shared his feelings on the matter. Last Thursday, Ken Wharfe, who was a personal protection officer to Princess Di in the '90s, spoke with Vanity Fair about royals flying private, noting that they "always flew commercial" when he was working at the palace. He called the royal couple's private flights "hypocritical," adding, "Harry can’t be preaching about the catastrophic effects of climate change whilst jetting around the world on a private plane."

DeGeneres' negative reaction to the negative reactions came shortly after John addressed Prince Harry, Markle, and Archie’s excursion to his home on social media. “I am deeply distressed by today’s distorted and malicious account in the press surrounding the Duke and Duchess of Sussex’s private stay at my home in Nice last week,” his message began. “Prince Harry’s Mother, Diana Princess Of Wales was one of my dearest friends. I feel a profound sense of obligation to protect Harry and his family from the unnecessary press intrusion that contributed to Diana’s untimely death.”

John and his husband David Furnish invited Prince Harry, Markle, and Archie to “have a private holiday inside the safety and tranquility of our home,” and they arrived at the French Riviera home by a private jet that was set up by their hosts. “To maintain a high level of much-needed protection, we provided them with a private jet flight,” John explained. “To support Prince Harry’s commitment to the environment, we ensured their flight was carbon neutral, by making the appropriate contribution to Carbon Footprint™.”

He continued, “I highly respect and applaud both Harry and Meghan’s commitment to charity and I’m calling on the press to cease these relentless and untrue assassinations on their character that are spuriously crafted on an almost daily basis.”

Prince Harry and Meghan have their critics (oh, how they have their critics!), but they also have some people in their corner who are ready to come to their defense. As DeGeneres said, they're just trying to make the world better.

More like this
An 'Emily In Paris' Fave Is Joining Season 5 Of 'The Crown'
By Bustle Editors
Sadie Sink Would Escape Vecna From 'Stranger Things' With This Taylor Swift Song
By Grace Wehniainen
Who Is 'Stranger Things 4' Fan-Favorite Joseph Quinn Dating IRL?
By Grace Wehniainen
Bachelor Nation's Blake Horstmann Is Dating 'Love Is Blind' Star Giannina Gibelli
By Jake Viswanath and Radhika Menon
Get Even More From Bustle — Sign Up For The Newsletter