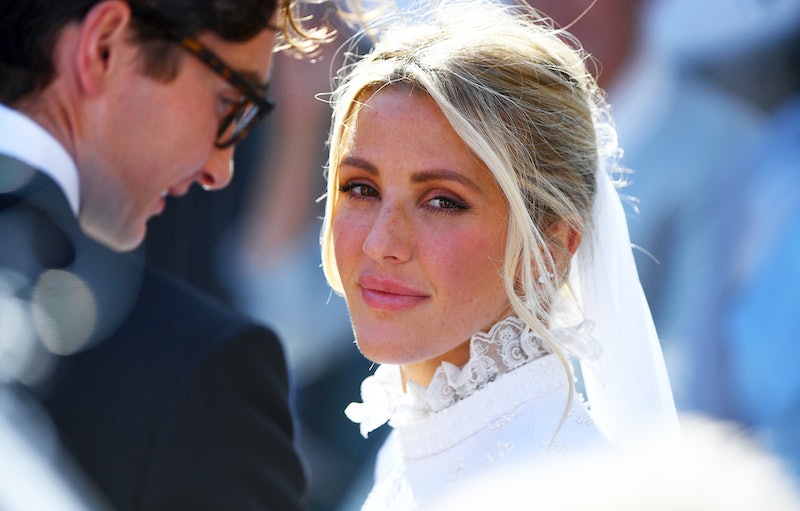 The royals' attendance wasn't exactly surprising, of course, as Goulding has a long history with the family. After the musician performed at BBC Radio 1's Big Weekend — which Prince William attended with then-girlfriend Kate Middleton — in May 2010, the now-Duke of Cambridge described Goulding's set as "brilliant," according to the BBC. (At the time, Goulding called the compliment one of her career highlights, also per the BBC.) After Goulding sang at William and Kate's Royal Wedding reception at Buckingham Palace in 2011, the musician went on to strike up a close friendship with Eugenie and Beatrice.

In fact, some have even guessed that Eugenie may have introduced Goulding and Jopling. The reason? The singer's new husband is the nephew of famed art dealer Jay Jopling, an investor in online art platform Paddle 8, which happens to be Eugenie's former employer. (Plus, the princess has a history of matchmaking, having reportedly set up cousin Prince Harry and his now ex-girlfriend Cressida Bonas in 2012.)

As People also noted, Goulding and Eugenie teamed up for a double date with Brooksbank and Jopling in 2017, sitting courtside at NYC's Madison Square Garden during a New York Knicks NBA game. The following year, Goulding and Jopling vacationed with Beatrice in Jordan's Wadi Rum Desert. Per Town and Country, model Karlie Kloss, her now-husband Joshua Kushner, and Meghan Markle‘s fashion designer friend Misha Nonoo were all part of the group getaway as well.

As far as Goulding's relationship with Jopling, the pair has largely kept their romance out of the public eye. After Jopling proposed, however, the usually private couple announced their engagement after 18 months of dating, in the marriage section of the U.K’s The Times newspaper. Even then, Goulding and Jopling somewhat tried to fly under the radar.

According to The Sun, the pair's announcement referred to the now-newlyweds as Mr C.W.F. Jopling and Miss E.J. Goulding. It read, per the paper: "The engagement is announced between Caspar, son of The Hon Nicholas Jopling of Yorkshire and Mrs Jayne Warde-Aldam of Yorkshire, and Elena, daughter of Mr Arthur Goulding of Hertfordshire and Mrs Tracey Sumner of West Midlands."

As a source explained to The Sun's Bizarre column at the time, "The couple wanted to tell friends and family first and people won't notice because her name is Elena. She's over the moon and has never felt so happy."

Once the cat was out of the bag, however, Jopling took to Instagram to share his excitement. Along with a photo of Goulding wearing her engagement ring, he gushed in a caption: "I get to spend the rest of my life with this truly extraordinary and beautiful, beautiful person. No one has ever made me feel more full of life, knowledge, happiness, or love. Hope, passion, confidence, and more love. There is no one I have ever been more complete with and there is no one I will ever feel more complete with. I look forward to a lifetime of exploring the world together, crying with laughter at stupid jokes, chatting into the early hours of the morning about art, music, the world, and the future. I love you Elena. And thank you to all of you that have sent such loving messages today."

More like this
Who Is Bad Bunny Dating? Gabriela Berlingeri's Vocals Are Featured On His Song "En Casita"
By Radhika Menon
Demi Lovato's New Song "29" Hints At Their Age Gap From Ex-Boyfriend Wilmer Valderrama
By Jake Viswanath
Beyoncé & Jay-Z's Relationship Timeline Proves They're Still "Crazy In Love"
By Jake Viswanath
Britney Spears & Sam Asghari Called Out Kevin Federline’s Claims About Her Kids
By Grace Wehniainen
Get Even More From Bustle — Sign Up For The Newsletter