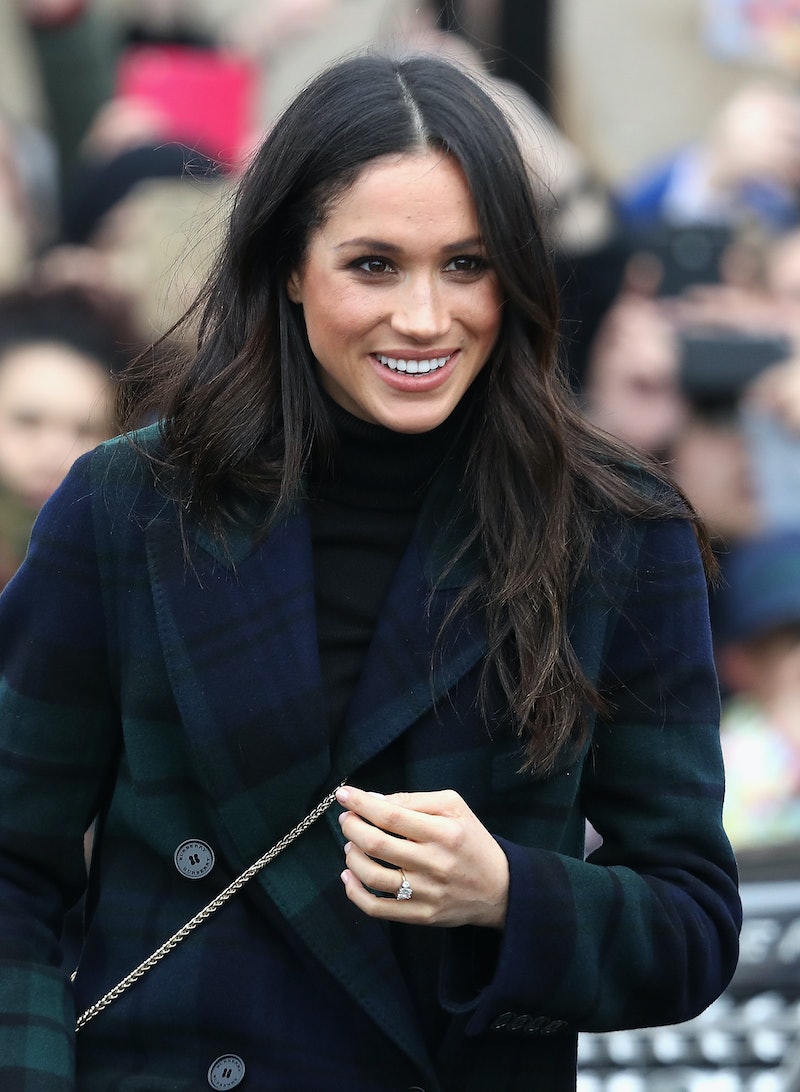 The most anticipated wedding of the year is only one day away. On Saturday, May 19, Meghan Markle and Prince Harry will officially become wife and husband. It's going to be a memorable day with those nearest and dearest to the couple, including those in their bridal party. You may have heard Prince William is serving as Harry's best man, but what about the former Suits star? Does she have a maid of honor? Actually, she doesn't, which may have you wondering why Markle doesn't have a maid of honor. And there's a valid reason for her not choosing someone.

On May 4, a Kensington Palace spokesperson told Us Weekly in a statement, "She has a very close circle of friends and she could not just choose one. They will all be traveling to London that week to spend some quality time with her and she is pleased to have all their support there on her wedding day."

Even though many brides typically select someone who they consider their closest female confidant to be either their maid or matron of honor, Markle wasn't able to do it. That's how many friends she has. It definitely speaks to who she is as a person. The 36-year-old sees all of her friends as equals and loves and supports them all the same. There aren't many people who can say that about their group of friends, but this goes to show you how important Markle's friendships are to her.

For a long time, there was speculation the soon-to-be royal would choose from a specific list of women to be her bridesmaids or her maid of honor, which included tennis champion Serena Williams, Suits co-star Abigail Spencer, Quantico star Priyanka Chopra (she will be at the wedding and confirmed she is not a bridesmaid), and designer Misha Nonoo (who was rumored to be the one who introduced Markle to Harry).

But at the top of the list was Jessica Mulroney, a stylist and bridal consultant. In April, Vanity Fair also labeled Mulroney as Markle's "secret wedding planner". In the past, Mulroney posted multiple Instagrams with Markle, including one of them drinking wine, as you can see below. There is another Instagram from March 2016, which Mulroney captioned, "This woman is busy. She juggles more in a day than most do in a week. And yet she still finds time to travel to Rwanda with @worlddivison and creates global awareness for the water crisis. She is a boss. And I adore her [heart emoji]."

Mulroney may not be in the wedding party or Markle's maid of honor, but she is part of the ceremony in a way, because her children have official of her friend's big day. That's right, her daughter and twin boys are in the bridal party, Kensington Palace announced on May 16.

In keeping with tradition, children will serve as bridesmaids and page boys, including Harry's niece and nephew, Princess Charlotte and Prince George. As for Mulroney's children, her 4-year-old daughter, Ivy Mulroney, is a bridesmaid, and her 7-year-old twin boys, Brian and John Mulroney, are page boys. Despite Mulroney not being a bridesmaid or maid of honor, she will obviously be at the wedding, since her children are part of the ceremony. On May 16, Harper's Bazaar also reported Mulroney had landed in London with her children and husband, Ben Mulroney.

Even though Markle doesn't have a maid of honor, her wedding will still be extremely special. Her father, Thomas Markle Sr., unfortunately, won't be attending, nor will he be walking his daughter down the aisle, as confirmed by Markle in a statement released by Kensington Palace Thursday, but her mother, Doria Ragland, will ride with Markle in the car on the way to Windsor Castle. Plus, it was confirmed by the palace Friday Prince Charles will walk Markle down the aisle. Overall, Markle's wedding day will be an unforgettable one.

More like this
Tyler Perry Makes Rare Comment About Meghan Markle & Prince Harry's Love Life
By Radhika Menon
Meghan Markle Might Be Returning To The UK For A Very Special Reason
By Sam Ramsden
Here's When 'The Crown' Season 5 Will Premiere — And What To Expect
By Bustle Editors
Who Is Nick Cannon Dating & How Many Kids Does He Have?
By Jordyn Tilchen and Radhika Menon
Get Even More From Bustle — Sign Up For The Newsletter