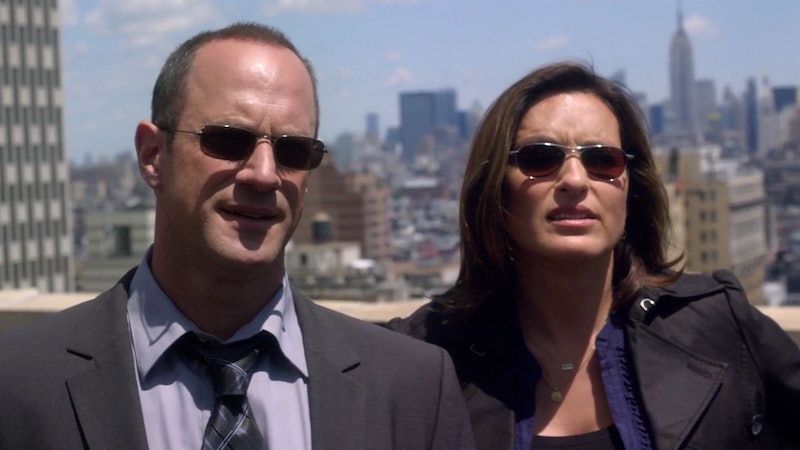 After working together for 12 years, it seems only natural that Mariska Hargitay and Christopher Meloni would have developed a deep and abiding friendship. That certainly seems the case after their reunion earlier this month, photos of which were posted on both actors' Instagram. The adorable shots had fans freaking out, wondering if Christopher Meloni will return to Law & Order: SVU to reprise his role as Elliot Stabler.

With Season 21 of SVU just around the corner, it seems the perfect time for Stabler to make a return to the NYPD. The new episodes will mark the start of a record-breaking season for the show as SVU becomes the longest-running scripted series on TV, a title formerly held jointly by Law & Order and Gunsmoke.

Since leaving SVU back in 2011 over an alleged contract dispute, Meloni has said that he has no regrets about leaving and no interest in returning to the NBC series, much to the chagrin of longtime fans. However, his latest hangout session with Hargitay has reignited hopes that he might reconsider that position moving forward.

Of course, Hargitay and Meloni's friendship outside of work doesn't necessarily have any bearing on whether or not Stabler might return to our TV screens. The pair have stayed in touch often over the years, meeting up for Valentine's Day and attending Christmas celebrations together, events they've been kind enough to share with fans. However, there have been no reports of Meloni reprising his role, so it's unlikely anything has changed here... at least not yet.

Meloni himself did offer fans a small glimmer of hope in a 2016 interview with Entertainment Weekly in which he revealed that he wasn't totally closed off to the idea of coming back to SVU when the show's final episodes eventually air.

"I always presented that I’d be open to doing the last few episodes, so that’s really all I have to say about that," he said. "It’s not up to me, I’ll just say that. I’ve said my peace on it."

Fans aren't the only ones holding out for even a small Elliot cameo in one of the new episodes. SVU showrunner Warren Leight has admitted that while it seems unlikely, he still hasn't given up hope that we might see more of Stabler.

"It's interesting to me. As long as the show is running, I feel like we will—someday, I would hope to see him again," Leight told E! News. "I don't know how, I don't know when, but, yeah, that's kind of, I think the fans and Benson and Stabler are owed that."

Even Hargitay would be happy to have the dynamic duo back together. In a 2018 interview with TV Insider, the actress admitted that it would be great to have her on-screen partner back even if it was just for one episode.

"I don’t know anything, but I think SVU is going to go on for a while. He’s on a show right now and he’s super 'happy', literally — he’s happy, I’m happy," she said. "I’ll speak for myself: I think it would be fun to have one last hurrah."

It remains to be seen whether Meloni will bless fans with the on-screen reunion between Benson and Stabler they so desperately crave, but it's certainly not out of the question. No doubt everyone will be keeping their eyes peeled for a possible sighting on Thursday nights once Law & Order: SVU Season 21 begins on NBC on September 26th.