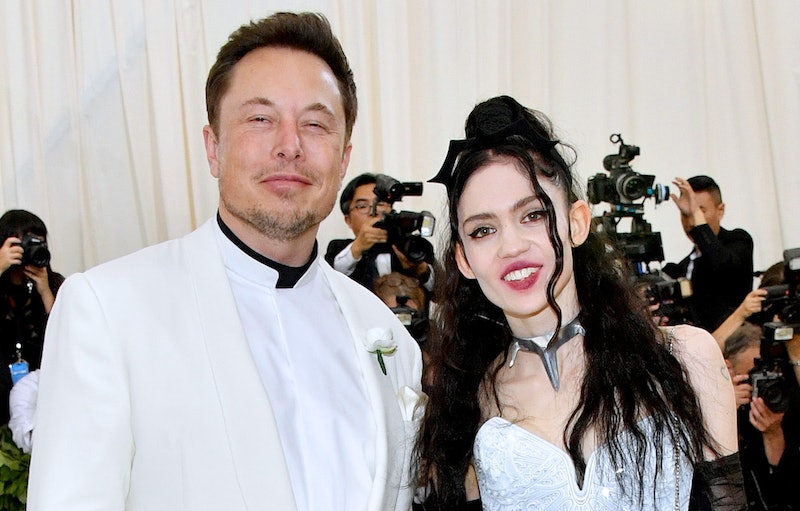 What’s in a name? Certainly not X Æ A-12. Elon Musk and Grimes’ official baby name has been revealed. Due to Calrifornia law that requires names to use only letters from the English alphabet and limits numbers and special signs, the offspring of the SpaceX CEO and singer, real name Claire Elise Boucher, is actually — drum roll, please — X AE A-XII Musk. According to a birth certificate obtained by TMZ, this means that the baby boy’s first name is X and his middle name is AE A-XII. The two welcomed X on May 4 at Cedars Sinai Medical Center in Los Angeles.

At the time, Musk revealed via Twitter that his son, his first with Grimes and seventh child overall, had been named X Æ A-12. Grimes confirmed the name on Twitter on May 5 and explained the origins. Per the singer, X stands for an unknown variable, Æ represents the elven spelling for artificial intelligence, and A-12 alludes to the couple’s favorite aircraft built for the CIA. During an interview on Joe Rogan’s podcast, The Joe Rogan Experience, on May 7, Musk clarified the pronunciation. “I mean, it's just X, the letter X, and then the Æ is pronounced like 'Ash,’” he said. “And then A-12 is my contribution.”

Musk also revealed that Grimes is the one who came up with the unique moniker. “She’s great at names," he told Rogan. As for how parenthood is treating the duo, Musk said that baby X is “cute as a button” when asked about the tot on Twitter. Grimes similarly fielded a question about how she and baby X were doing on Twitter on May 24, responding that they were “Tired but ok.”

In an interview with The Face in February prior to giving birth, Grimes offered insights into how she and Musk would parent their son. For starters, the self-proclaimed raver anticipates X attending some raves of his own. “Children need to get into raving, but I don't think I'll rave with my kid,” she said. “I don't think kids and adults need to rave together.” She added, "I don't have a problem with late bedtimes [or] ​nocturnalism, unless there's some health risk I should know about. The baby has already been exposed to a lot of techno in the womb."

She also mused about “periodically” sending X to “live in the woods” with her grandfather to do "lots of physical labor in the cold and whatnot” — not as punishment, but to ensure her son isn’t “too spoiled.” Given his already lengthy journey to getting an official name, some periodical time in the woods probably won't be the most unique aspect of X's life.

More like this
The 'Love Actually' Reunion Is Missing A Major Player
By Bustle UK
Kate Middleton & Prince William Were Booed & Mocked On Their U.S. Visit
By Jake Viswanath
You Definitely Know The Voice Of Shuri's AI In 'Black Panther: Wakanda Forever'
By Brad Witter
The Fan Whom Adele Scolded For Using A Filter On Their Selfie Has Something To Say
By Radhika Menon
Get Even More From Bustle — Sign Up For The Newsletter