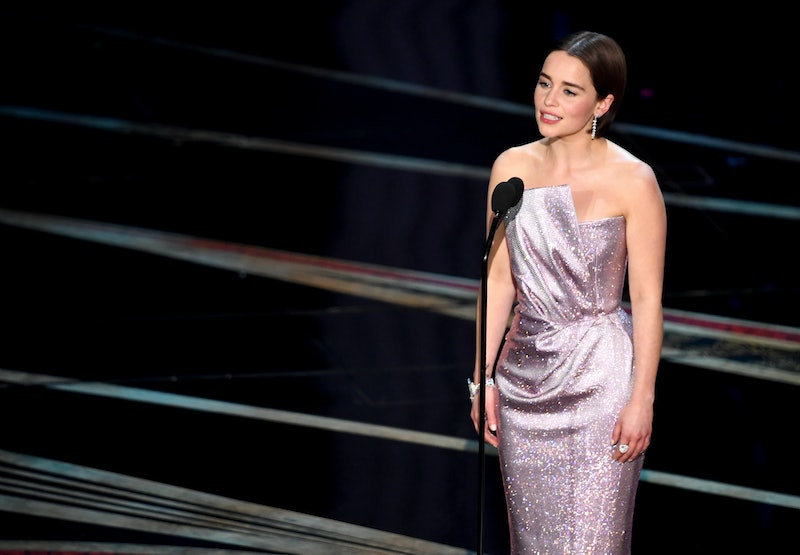 Well, this is a sentence you probably didn't expect to read. At the 2019 Oscars, Game of Thrones star Emilia Clarke offered Khaleesi's dragons to Ruth Bader Ginsburg, as a form of protection for the 85-year-old Supreme Court justice. Totally normal, right? Only at the Academy Awards, you guys.

Clarke made the, uh, very generous offer while introducing Jennifer Hudson's performance of "I'll Fight," the Best Song nominee from the documentary RBG — which is, naturally, all about Ginsburg. The acclaimed doc, directed by Betsy West and Julie Cohen, follows the justice's extraordinary career and enormous fan following. In addition to its Best Song nod, given to the track's writer Diane Warren, it also earned a nomination for Best Documentary at the Oscars (it lost to Free Solo).

As she introduced Hudson's performance of "I'll Fight," Clarke noted her own appreciation of Ginsburg, joking that her own iconic Game of Thrones character couldn't live up to the justice's legacy. "Khaleesi has nothing on her," said Clarke. Still, that didn't stop the actor from offering up Dany's devoted and dangerous pets to Ginsburg in case they ever came in handy. Joked Clarke: "Justice Ginsburg, if you ever want to borrow the dragons, ring me!"

Unsurprisingly, Game of Thrones fans reacted strongly to Clarke's comments, taking to Twitter to express their emotions. While some straight up loved the offer, others were apparently offended by the mere suggestion that Ginsburg needed any support.

Ginsburg might be strong enough to manage without the support of Khaleesi's three dragons, but she has had a tough time lately. In November 2018, the justice fell at work and fractured three ribs, leading to a hospitalization. Although she recovered and returned to the job before long, a follow-up exam revealed that she had cancerous nodules in her lungs, causing her to need surgery. After spending a few months healing — during which time she missed arguments at the Supreme Court for the first time ever — Ginsburg returned to the bench on Feb. 15.

Countless people are thrilled to have the justice back in action, and judging by her comments at the Oscars, that group includes Clarke. Her offer may have been jokey — if only those Game of Thrones dragons were real, right? — but the emotion seemed sincere. So many people want Ginsburg to stay healthy and continue her work on the Supreme Court, where she's spent decades fighting for women's rights, LGBTQ+ equality, and more.

If you haven't yet seen the documentary RBG, do yourself a favor and check it out — it's streaming on Hulu if you have a subscription, thankfully. The film is a thorough and moving examination of the iconic woman's life and career, making it crystal-clear why and how the justice became such a worldwide legend. It may have lost the Best Documentary award to Free Solo, but in the hearts of many fans, RBG is a winner simply for honoring such an incredible and inspiring public figure.