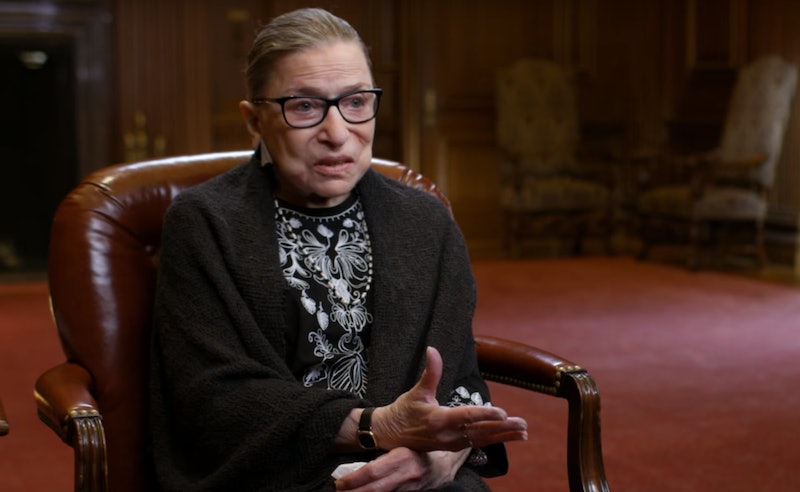 Just because the Oscars are airing on Sunday, Feb. 24 that doesn't mean it's too late to play last minute catch up on a few of the nominees. Case in point: Best Documentary nominee RBG is streaming on Hulu, which means you can watch the story of Ruth Bader Ginsburg's journey from childhood to Supreme Court justice with a glass of wine and a bowl of popcorn right now. The much talked about doc is just a few clicks away, and despite stiff competition from fellow nominees like Free Solo, Minding the Gap, and Of Fathers and Sons, it stands a good chance of taking home the trophy on Sunday night.

Directed by Betsy Cohen and Julie West, RBG is a deep dive into the history of one the most influential women living today. The directors interviewed not only the justice, but her friends, family, and colleagues to get a thorough picture of who she is, and how she earned her seat on the Supreme Court. The noted gender equality champion is a larger than life character, as her cool nickname — "The Notorious RBG," coined by lawyer-blogger Shana Knizhnik, according to Rolling Stone — suggests, and the documentary is all the better for not shying away from her fierceness.

Even the justice herself is reportedly a fan. According to CNN, she was pleased to hear that the documentary received an Academy Award nomination. Cohen and West told CNN that they personally shared the news of the nomination to Ginsburg. "We were excited to be the ones to give Justice Ginsburg the good news that RBG has been nominated for Best Documentary," they said. "We reached her on the phone at her home in Washington this morning. She congratulated us and said the nomination was 'eminently well-deserved.'"

With an endorsement from Ginsburg herself, there's really no excuse not to check out this illuminating doc.

RBG first premiered at the Sundance Film Festival in January 2018, before enjoying a limited theater run and a television premiere on CNN. Although Hulu is the documentary's streaming home, it's not the only place that you can check out the Oscar nominee. If you don't have Hulu, you can also rent it on popular platforms like YouTube, Amazon Video, and Google Play for $3.99. That's a small price to pay to watch a rare documentary that manages to be inspiring and entertaining without being dour.

Whether the doc walks away with the Oscar on Sunday night or not, it's well worth watching. In the current political environment, Ginsburg stands as example of how to make a difference within the justice system with strength, grace, and, yes, a healthy sense of humor. There are plenty of worthy films nominated for a 2019 Academy Award, and the rush to watch as many as you can before Hollywood's biggest night is always hectic. But whether you stream RBG or rent it, you can be assured that watching this Oscar nominated doc will leave you delighted and inspired by the true American icon that is Ginsburg.