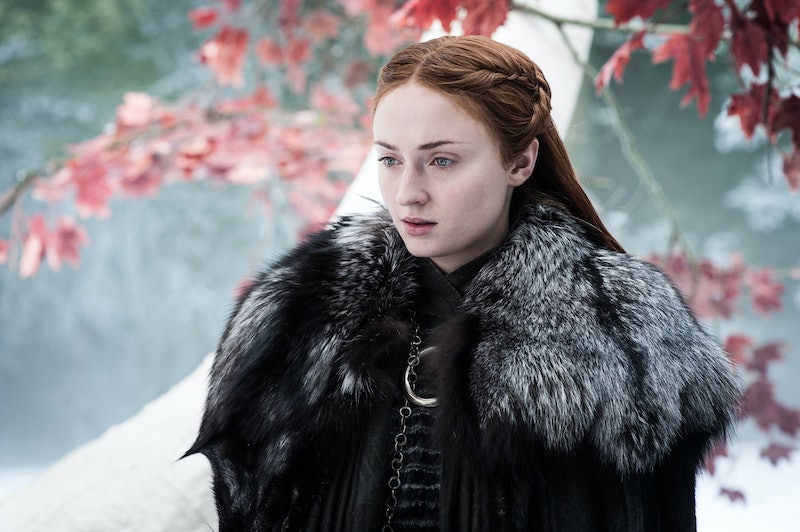 Season 8 of Game of Thrones is set to premiere in less than two months, but fan theories aside, there's precious little actual information about the final season's storyline. That hasn't changed, but thanks to some sleuthing from Winter Is Coming, it's been revealed that Season 8 could include two unexpected Game of Thrones characters in the season premiere. Possible spoilers ahead, so if you don't want to know who could be returning, turn back now.

On Feb. 14, Game of Thrones fansite Watchers on the Wall reported that a few intrepid viewers had uncovered the official cast list for the Season 8 premiere on HBO's website. Fans used the same method they've used to uncover episode spoilers for previous seasons — looking for the official URL for an episode on the premium channel's site before the episode airs. Since the discovery was made, HBO has removed the list of actors reportedly set to appear in the premiere, but not before fans noticed that House Tully might just rise again before the series ends.

According to the cast list, Tobias Menzies and Lino Facioli are listed alongside expected faces like Kit Harington, Emilia Clarke, and Maisie Williams. Both actors were last seen in Season 6 when Menzies' Edmure Tully was presumably returned to The Twins after Jaime forced him to surrender Riverrun, and Littlefinger convinced Facioli's Robin Arryn to send the Knights of the Vale North to defend Winterfell. The characters are notable for being two of the last known surviving members of the Tully family (alongside Arya, Sansa, and Bran). Edmure is Catelyn's brother, and Robin is her nephew.

Given that there will be just six episodes in Season 8, and there are quite a few major characters for the writers to maneuver already, it's hard to believe that Edmure or Robin will play a major role in the final season. This is especially true for Edmure since Menzies is a highly in demand actor who appeared in AMC's 2018 series The Terror, and is currently filming Season 3 of The Crown. If he truly is in Season 8, his schedule likely didn't allow him to film an extensive amount of scenes.

Still, strategically speaking, Edmure and Robin could potentially provide more allies for the fight against the White Walkers. They could also represent a brighter future as the leaders of their respective houses — Tully and Arryn. Even though fans haven't seen Edmure interact with his remaining Stark nieces and nephews, he's still their uncle. And since Arya killed all of his Frey captors, he may now control The Twins. As Winter Is Coming pointed out, that means he may stand between the North and the South as the guardian of the Riverlands. With the Night King's army marching North, he could provide Jon and the rest of the main characters with a strategic stronghold from which they can launch attacks.

Then there's Robin, who was close to his cousin Sansa when she was living at the Eyrie in Season 5. He may feel generous in helping her directly now that Littlefinger is no longer alive to manipulate either of them. Or, upon hearing of the threat in the North, he could call his army back to protect him and his castle, further dwindling the troops at Winterfell. Robin's erratic temperament is unpredictable to say the least.

A third option is that the characters will appear in a flashback or maybe in the "previously on" section of the premieew, requiring them to be credited. If their appearance is a blink and you'll miss it moment it will be a shame, because while they're minor characters in the grand scheme of things, Edmure and Robin are both part of the Tully line. And it's only through them, Sansa, Arya, and Bran that the once great house can continue to exist in some capacity after the Great War comes to an end.

More like this
Rupert Grint Just Shared A *Major* Update About Ron Weasley’s Future
By El Hunt
'GoT' Star Emilia Clarke Says She "Just Can't" Watch 'House Of The Dragon'
By Brad Witter
The 'Freeridge' Cast Shared Their Hopes For A Potential Season 2
By Grace Wehniainen
Everything To Know About A Potential 'Lockwood & Co.' Season 2
By Gretchen Smail
Get Even More From Bustle — Sign Up For The Newsletter
From hair trends to relationship advice, our daily newsletter has everything you need to sound like a person who’s on TikTok, even if you aren’t.