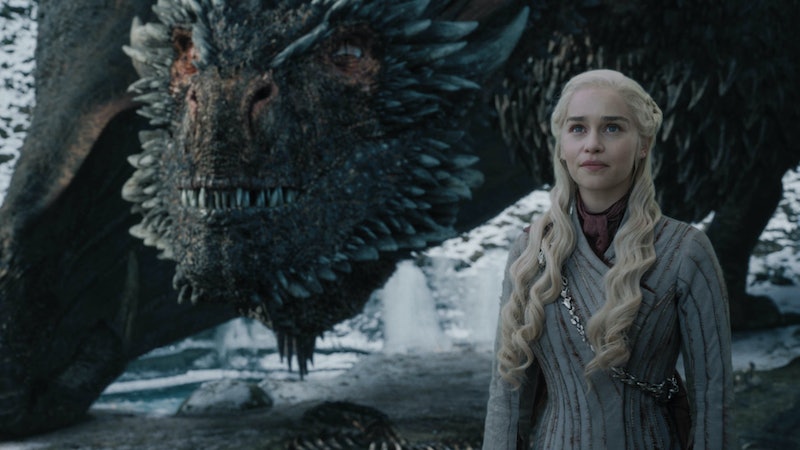 The Khaleesi has spoken, and yes, she still has issues with the Game of Thrones finale, too. In a new interview with The Sunday Times, Emilia Clarke shared some new GoT finale thoughts, including how she felt about Jon Snow's "punishment" for Daenerys' murder. While Clarke remains diplomatic for the most part, she's still defending the Mother of Dragons — as well she should.

In the final season of Game of Thrones, Daenerys' short reign over the Seven Kingdoms came to an anticlimactic end when her nephew/lover Jon stabbed her in what was left of the throne room. Soon afterwards, he was banished to the Night's Watch (which had no members left), and headed beyond the Wall with Tormund and the rest of the Free Folk to live a life free of the burden of duty. Meanwhile, the Dragon Queen's last remaining child, Drogon, flew off with her body. For a woman who transformed herself from a young woman sold by her brother into a conqueror who liberated slaves and attempted to break the wheel of tradition in Westeros, her ending was disappointing to say the least.

"Yeah, I felt for her. I really felt for her. And yeah, was I annoyed that Jon Snow didn't have to deal with something?" Clarke said to the Sunday Times. "He got away with murder — literally."

This isn't the first time that Clarke has expressed her dissatisfaction with the fantasy show's conclusion. In May 2019, she shared with The New Yorker that she doesn't want Daenerys to be remembered as the "mad queen." She also elaborated on what she believes brought her character to the point where she would raze King's Landing. Ultimately, it all comes down to Jon's rejection.

"She gives herself to Jon [Snow] entirely, and she gives him many, many choices, many options to see clearly with open eyes," Clake said. "And she's asking him, 'If you wanted to be with me, then let me fulfill this... I know I can be a good leader, so let's do this together. Let's do it.' And he doesn't. And that disappointment is the final thing that breaks her as a human being, because, my God, all she's known is pain, sacrifice, and abuse."

Daenerys' ending was tragic, and like Clarke, Game of Thrones fans are still grappling with the outcome. That's something she understands and is sympathetic about. As she told the Sunday Times, she wondered what fans would think "because we did it for them." But ultimately she just hopes that people will remember the Mother of Dragons as the fierce woman she was rather than as a "Mad Queen" taken out by Jon Snow's blade. Though at the same time, she wouldn't mind for Dany's death to have been avenged a little bit more harshly.