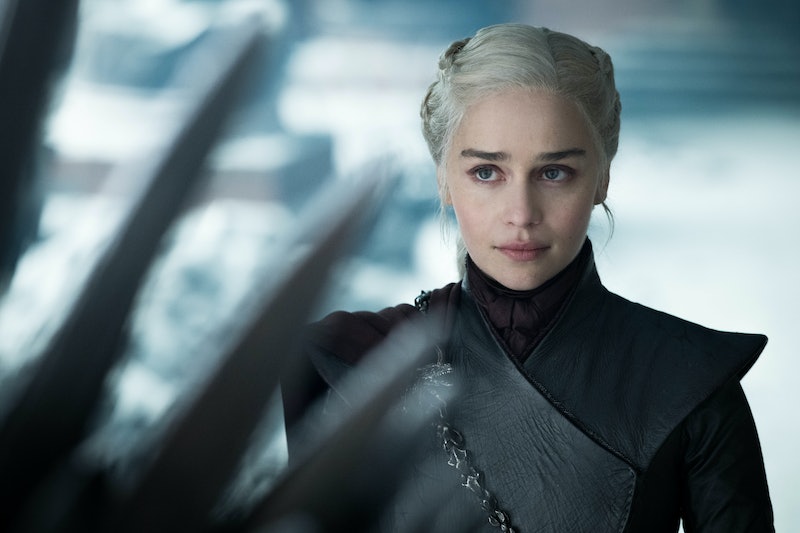 Fans were less than thrilled when Daenerys Targaryen morphed into a brutal villain during the penultimate episode of Game of Thrones. It all but sealed her eventual fate in the series finale, "The Iron Throne," and was generally just like, a bummer. Watching Dany go from Breaker of Chains to Mad Queen was a blow to fans, but it was also a hit to the actor herself. Emilia Clarke doesn't want Daenerys to be remembered as the "mad queen" after the Game Of Thrones series finale, the actor revealed in a new interview with the New Yorker. After all, Dany was so much more than that for such a long time.

Clarke's whole interview with the New Yorker is a must-read for any GoT fan. Not only did she address *that* Starbucks coffee cup scandal — she maintained that it wasn't hers and declared she didn't even notice it was there while they were filming — but she also discussed Dany's eight-season character development in a seriously in-depth way. As fans who watched the finale know, Dany ended up committing mass murder, killing innocent people of King's Landing, which convinced Jon that she had gone mad with power. In the finale, Jon killed Dany when she was mere steps away from the Iron Throne, bringing her journey to an end.

Clarke told the New Yorker that she definitely didn't see her untimely fate coming. On the other hand, "Daenerys has quite consistently had this road to salvation, and she’s been sitting atop a very safe mountain," she admitted. Even so, her transformation into the mad queen was tough for even Clarke to swallow, but that's not how she wants Dany to be remembered.

"I don’t enjoy fans calling me 'the Mad Queen,'" Clarke said, pointing out that Dany has been through so much trauma in her life, it makes sense that she might be a bit off when it comes to making important, life and death decisions. "But she’s is so far gone in grief, in trauma, and in pain. And yet our brains are fascinating in the way that they find a fast route to feel O.K., whether you’re relying on a substance or you’re mildly deluded."

The actor also revealed that she tried to add a "lightness" to her character in her final scene, explaining,

"If you see abuse in someone young, they often are able to mentally leave the room. I wanted Daenerys to be there. I wanted to show her as we saw her in the beginning: young, naïve, childlike, open, and full of love and hope. I wanted so much for that to be the last memory of her."

Despite how things ended, Clarke told the magazine that she "couldn’t have been more overjoyed at getting the opportunity to inhabit this character." And this isn't the first time she's expressed her overwhelming gratitude for Dany, though. During an interview for HBO's video series, "The Cast Remembers," on May 9, the actor expounded upon how playing Dany has impacted her off-screen.

"The journey that I’ve been on with Daenerys, it's sharpened me as an actor, and because of the heights that she goes to, it’s forced me to find them within myself," she admitted. "And so, anytime anything good or bad happens, you put it into her. So, Daenerys is a tapestry of my entire adult life. Within each major scene of Daenerys, is every major scene of my life."

It's been close to a decade since the first episode of GoT aired, and it's been quite the journey for fans as well. No matter how you feel about the series finale, though, just don't call Clarke "the mad queen," k?