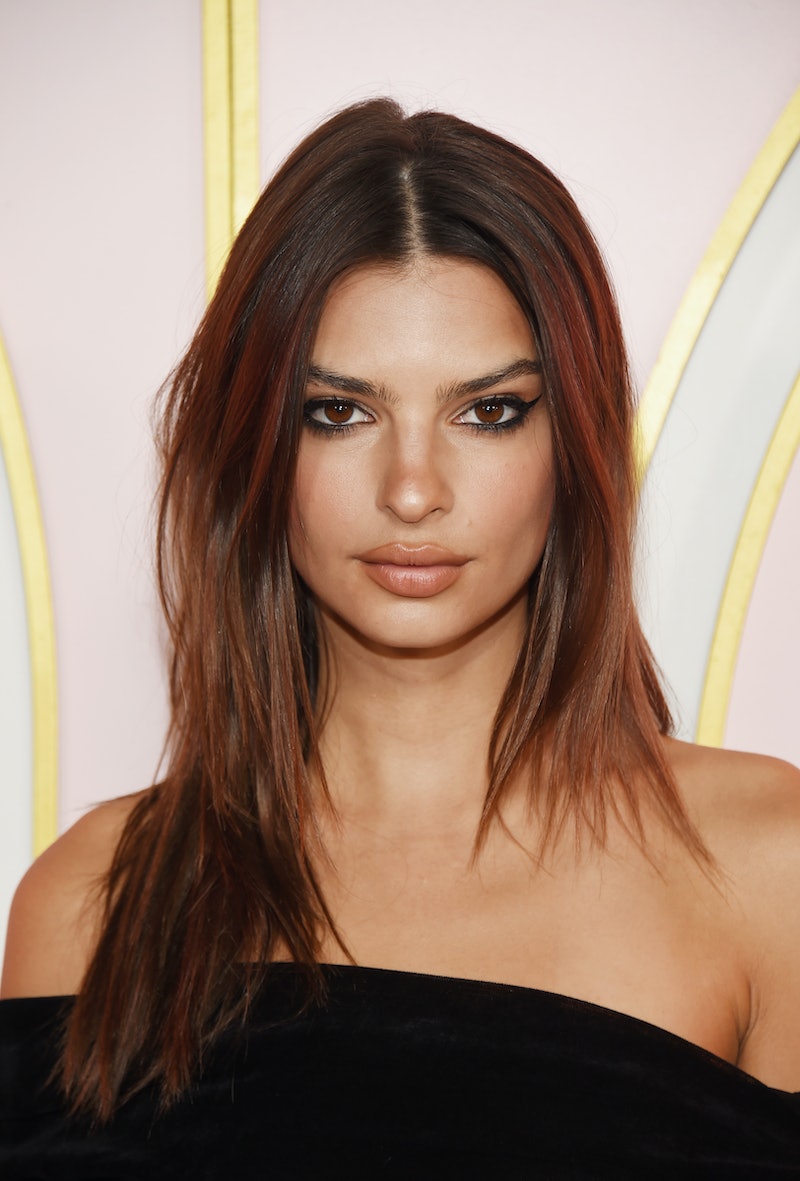 You can always count on Emily Ratajkowski to stand up for what she believes in. That was certainly the case recently, as she noted in a lengthy Instagram post. In case you missed it, Emily Ratajkowski was arrested after protesting Brett Kavanaugh on Oct. 4, CNN reported. After the event, the I Feel Pretty star wrote about the situation on the social media site and offered up an incredibly important message in the process.

The model posted a photo of herself in the midst of protesting Kavanaugh's nomination, complete with a sign that read, "Respect Female Existence or Expect Our Resistance." In the caption, she wrote about how she was detained after protesting and explained exactly why the judge's confirmation could be so detrimental to society. She wrote:

"Today I was arrested protesting the Supreme Court nomination of Brett Kavanaugh, a man who has been accused by multiple women of sexual assault. Men who hurt women can no longer be in positions of power. Kavanaugh's confirmation as a Justice of the Supreme Court of the United States is a message to women in this country that they do not matter. I demand a government that acknowledges, respects and supports women as much as it does men."

Not only did Ratajkowski inspire others by standing up for something she believes in, but she also took time to explain what Kavanaugh's confirmation to the Supreme Court signifies for many women.

As previously mentioned, Ratajkowski's powerful message came shortly after she was detained for protesting Kavanaugh's nomination, which she detailed in her post. She wasn't the only celeb at the protest, though. Her I Feel Pretty costar Amy Schumer also made an appearance and, like Ratajkowski, she was also arrested for protesting. According to CNN's Joel Williams, the two actors were both spotted in the Hart Senate Office building, in which they spoke out against Kavanaugh's confirmation to the SCOTUS.

Earlier, Schumer and Ratajkowski, alongside Senator Kirsten Gillibrand, appeared outside of the E. Barrett Prettyman Federal Courthouse, which is where the protest got underway. During their appearance, Schumer said to her fellow protesters and reporters, per The Hill,

"Emily and I just wanted to thank you all so much for showing up today. That's what we're going to do. We're going to keep showing up and no matter how this goes, they cannot keep us down. We will win."

The protest came shortly after Senators were granted access to the FBI's findings during their investigation of Kavanaugh's case. It also followed numerous women, including Dr. Christine Blasey Ford, accusing Kavanaugh of committing acts of sexual misconduct, an allegation Ford originally revealed in a written letter to Senator Dianne Feinstein in July. Ford even sat before the Senate Judiciary Committee and further discussed the allegations last week.

The Supreme Court nominee has repeatedly denied any wrongdoing, with his spokesperson saying, per a statement given to NBC News, "I categorically and unequivocally deny this allegation. I did not do this back in high school or at any time."

It's so important and so inspiring to see people, such as Ratajkowski and Schumer, taking such a strong stand for women everywhere in the light of this Kavanaugh case. As their comments on the matter make clear, they're not stopping speaking out anytime soon.

More like this
Meghan Markle Delivers Empowering Message About Being Yourself
By Sophie McEvoy
At 28, Melanie C Was Falling In Love & Reclaiming Her Confidence
By Olivia-Anne Cleary
Liz Truss Is Being Compared To A Controversial Emma Thompson Character
By Sophie McEvoy
Mel C Wants You To Know That Margaret Thatcher Wasn’t A Spice Girl
By Darshita Goyal
Get Even More From Bustle — Sign Up For The Newsletter