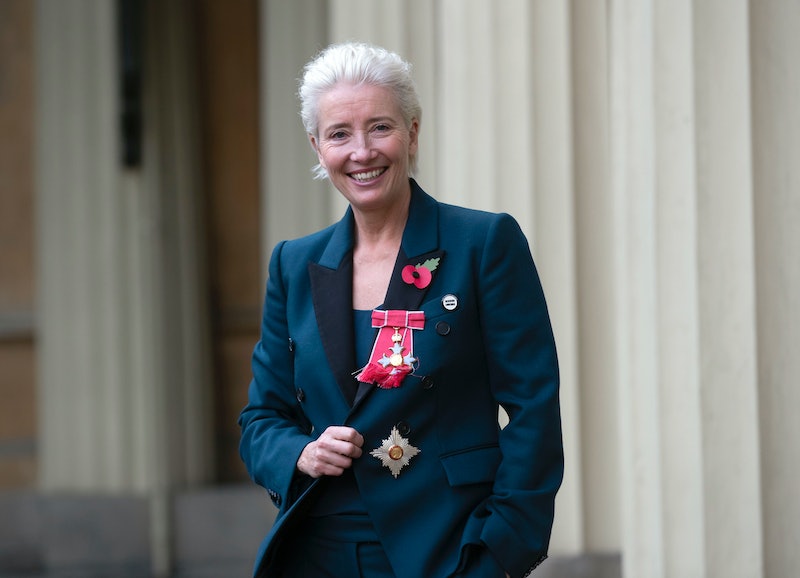 Emma Thompson's SNL episode was a very British affair, as to be expected when the host is a Dame Commander of the Order of the British Empire. However, she took some time at the beginning of her episode to show that Mother's Day is an honored tradition on both sides of the Atlantic, and she brought out some special guests to celebrate the holiday. Emma Thompson's SNL monologue included surprise appearances from Tina Fey and Amy Poehler, both mothers themselves, who helped viewers decode some of the ambiguous phrases you may be hearing on Sunday.

The three explained the underlying truth of three go-to mom phrases mothers may not feel comfortable putting into words themselves. For instance, when a mother says they want to relax in the backyard and maybe get a massage for Mother's Day, what they're really saying is "how does one buy weed?" When a British mother says "splendid," they could be saying anything ranging from "I'm happy" or "I'm sad" to "how are you, you embarrass me, I'm crazy" or "you're drunk." The celeb trio ended the segment by revealing that in moments of their own greatest frustration, what they're really telling their children is just how deeply they love them. Poehler paid tribute to her children Archie and Abel, Fey showed affection for her daughters Alice and Penelope, and Thompson shouted out her children Gaia and Tindyebwa.

The motherly vibes didn't end with the monologue, as Thompson later lent her acting talents to The Perfect Mother, a short film about how some moms may bend the truth when telling their child what raising them was like. While a grandmother tries to calm her own daughter's stressful experiences in new motherhood, the sketch flashes back in time to show that the grandmother's experiences in motherhood were a lot more stressful than she lets on. And while the daughter remembers a mother who never lost her cool, flashbacks reveal that the grandmother rarely even had her cool available to be lost. Thompson also reprised her role from the 2017 remake of Beauty And The Beast as one of film's most lovable mothers, Mrs. Potts, and introduced Belle to her child — not Chip, but her other child, Chaffe — before performing a sexually complicated rendition of the film's title song.

Thompson's other sketches during her episode featured a less motherly vibe, but still showcased her finely-tuned comedic talent. Her characters throughout the night included a Mary Poppins-esque etiquette instructor, a no-nonsense but clueless judge, and an expert judge on an surreal episode of Chopped. When Thompson wasn't celebrating Mother's Day, however, some SNL cast members were — Pete Davidson, in particular, celebrated by bringing his mother Amy Davidson on-camera during a segment on Weekend Update.

Overall, Thompson's SNL hosting gig was a celebration of mothers of all kinds — both human and, uh, teapot. It may not always be easy to understand what your mom really means, but Thompson showed that whatever it is, it's likely coming from a place of love.

More like this
Courteney Cox & Jennifer Aniston’s Latest 'Friends' Revival Is Everything
By Darshita Goyal
Here's What Jeffrey Dahmer's Dad Has Said About His Other Son, David
By Grace Wehniainen
Where Is Lionel Dahmer Today? Jeffrey Dahmer’s Father Reflected On The Serial Killer’s Death In 2020
By Brad Witter
'Reservation Dogs' Season 3 May Finally Mend Bear & Willie Jack’s Relationship
By Gretchen Smail
Get Even More From Bustle — Sign Up For The Newsletter