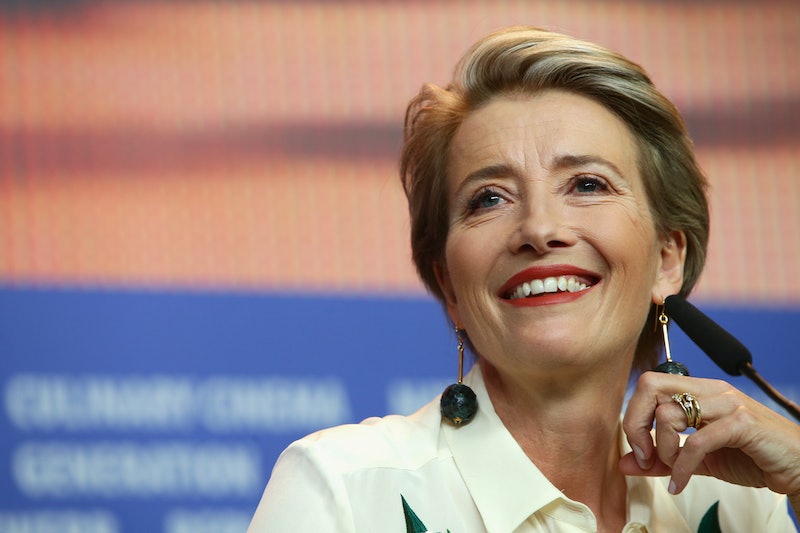 On Tuesday, Feb. 26, the Los Angeles Times shared a letter written by actor Emma Thompson about John Lasseter, the former Chief Creative Officer of Walt Disney and Pixar Animation Studios who was accused of sexual misconduct. In the letter, Thompson explained her decision to drop out of the animated film Luck after the movie's studio Skydance Animation hired Lasseter to head the company back in January. The letter also has an important message regarding how everyone in Hollywood should think about the next steps in the #MeToo movement, namely that they should prioritize women and their well-being over the second chances of men who have allegedly engaged in misconduct.

In her powerful note, which Thompson sent to Skydance in January and gave the Los Angeles Times permission to publish on Tuesday, the actor wrote that "hiring someone with Mr. Lasseter’s pattern of misconduct" seemed "very odd" to her, especially "given the present climate in which people with the kind of power that you have can reasonably be expected to step up to the plate."

Lasseter was officially let go from Pixar in June of 2018, following a six-month leave of absence after allegations of inappropriate conduct went public in November of 2017. At the time, the Pixar executive released a statement admitting to inappropriate hugging and "other missteps" during his tenure. In a letter to employees, he apologized "to anyone who has ever been on the receiving end of an unwanted hug or any other gesture they felt crossed the line in any way, shape, or form." In January, however, he was hired to run Skydance Animation, prompting Thompson to leave her project with the studio, as a representative for the actor confirmed to Bustle.

The actor's decision to leave the project is commendable, and it may unfortunately be a choice that more people will have to make if systemic changes aren't made in Hollywood regarding men accused of harassment and/or assault. Lasseter and others like Louis C.K. who've admitted to misconduct are now returning to public life, forcing the discussions around the #MeToo and Time's Up movement to shift. No longer is it just about exposing alleged misdeeds, but figuring out what comes next. How do we decide when and if these men should be given second chances? And who gets to make these decisions?

In her letter, Thompson tackled these questions by asking Skydance whether the studio really considered what hiring Lasseter would mean to its staff, specifically female workers. "Much has been said about giving John Lasseter a 'second chance,'" she wrote. "But he is presumably being paid millions of dollars to receive that second chance. How much money are the employees at Skydance being paid to GIVE him that second chance?"

The Los Angeles Times reported that after hiring Lasseter, Skydance Media Chief Executive David Ellison wrote a long email to staff explaining that the former Pixar head was "contractually obligated to behave professionally" in his new role. And in a town hall, Lasseter also reportedly apologized for past behavior while asking staff to give him a chance to show he's changed.

However, as Thompson wrote in her letter, Lasseter hasn't exactly given women a reason to believe him just yet. "If a man has been touching women inappropriately for decades, why would a woman want to work for him if the only reason he’s not touching them inappropriately now is that it says in his contract that he must behave 'professionally'?" she asked, seemingly questioning the sincerity of Lasseter's comments given the fact that his salary reportedly depended on them. Thompson went on, writing,

"If a man has made women at his companies feel undervalued and disrespected for decades, why should the women at his new company think that any respect he shows them is anything other than an act that he’s required to perform by his coach, his therapist and his employment agreement?"

According to the Los Angeles Times, Mireille Soria, president of Paramount Pictures Animation, with which Skydance has a distribution deal, reportedly let female employees know that they could decline to work with Lasseter if they so chose to. Thompson evidently did choose not to work with Lasseter, but how many women within the company who don't have the same clout were too afraid to do the same?

It's this imbalance that Thompson pointed out in the letter, questioning the validity of this second chance Lasseter's been given if it came without proper input from Skydance's employees. She wrote:

Ultimately, Thompson chose to quit her job because Lasseter was given a second chance by Skydance that she, herself, did not seem to want to give — at least not right now. Having to choose between one's job or standing up for others is an unfair situation for anyone to be put in, but the actor was willing to make this decision knowing it could lead to bigger change in the future.

"I am well aware that centuries of entitlement to women’s bodies whether they like it or not is not going to change overnight. Or in a year," Thompson wrote. "But I am also aware that if people who have spoken out — like me — do not take this sort of a stand then things are very unlikely to change at anything like the pace required to protect my daughter’s generation."

The amplification of the #MeToo movement has been a major turning point for many industries, including Hollywood, but it's not over yet. Those in power need to seriously think about what giving accused men "second chances" really means. By prioritizing the needs of men asking for forgiveness over those of the women they have allegedly hurt — or could potentially mistreat in the workplace — the industry sends the message that a man's financial and personal well being is still more important than a woman's.

It's brave of Thompson to have left the film, but the fact that she had to make that move shows how little some companies and individuals have learned from the #MeToo movement, and how far there still is to go.