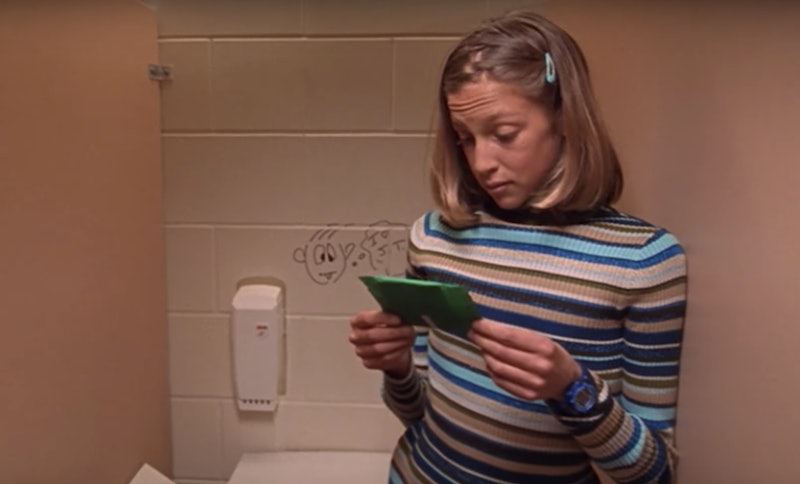 Middle school is awkward, point blank. Now, imagine every possible worst-case scenario for a teenager coming true. That happened at a certain Canadian junior high, where they tackled all the ups and downs of adolescence — aka Degrassi: The Next Generation. While there were many impactful moments in the series, one pivotal episode for teen girls everywhere was when Emma got her period in class in Degrassi Season 1 — along with a giant blood stain across her bright white skirt. Horrifying? Yes. But the way Emma handled it was actually a learning moment for many young women, including Miriam McDonald, who played Emma and brought the groundbreaking TV moment to life.

The episode "Coming Of Age" aired in the U.S. in 2002, and just like her character, McDonald was around 13 when filming. "To be honest, when that script came along I remember feeling a little bit mortified," she recalls over the phone. "The only thing I kept thinking was, 'Oh my gosh, how am I going to get through this?'"

Yet seeing the way Emma handled it, like "a hero," actually helped the actor IRL. Near the end of the episode, Emma winds up having to borrow way-too-big basketball shorts. When her classmates mock her outfit, teasing that she must've peed her pants, she snaps back, "No, I just got my period, for the first time. Menstruation, you may have heard of it. It happens to oh, 50 percent of the population?"

Emma later petitions to get a tampon dispenser put in the girls' bathroom. Her crush Sean even supports her by signing the list and acknowledging that it's a great idea.

"It really helped me as an actress and as a young girl be able to tackle that [topic]," McDonald says of the on-screen reactions from Sean, Emma's BFF Manny, and her teacher Mrs. Kwan. "Feeling like, despite the embarrassment, there's all these people that are standing up for you."

"Degrassi really got down to the nitty gritty... instead of brushing the real issues under the rug and focusing on the glossy, pretty parts of high school."

But that doesn't mean it was easy for a 13-year-old to film. "Obviously now as an adult, you realize that everybody knows and it's a part of life," she explains. "But I was still at that age where it seemed like this scary secret, so mostly I remember just feeling nervous."

Especially when it came to that infamous blood stain, which, by the way, was made of a mint-flavored candy syrup. "I remember how much wardrobe had to work to get that spot right," McDonald says, adding they went through like 10 different skirts. "It was pretty funny to see them all sort of like, 'OK, well how big is the stain? Where should it go?'"

Since this episode was from the very first season, the impact the scene would have wasn't immediately apparent to McDonald. But she says now, "I think teenage girls need something like that, because it's an awkward topic, it's not usually something that comes up casually in everyday conversation."

As the series progressed, Emma became even more of an advocate for what she believed in — whether protecting the environment or removing genetically modified food from the cafeteria. Looking back, McDonald admits, "My opinions wouldn't necessarily always mesh with what hers were. Sometimes I think that Emma took things to a level 10 when she should have scaled it back to maybe a 4 or 5."

But because Emma was "a little more ballsy" and "would fearlessly stick up for herself," it allowed the actor to tune into other parts of her personality too. And all in all, the experience on the show was one-of-a-kind.

"Degrassi really got down to the nitty gritty. And I think that's what has made our fanbase so authentic and stand by us," she explains. "It was a show that shed a light on those [topics], instead of brushing the real issues under the rug and focusing on the glossy, pretty parts of high school."

It's hard to deny the influence a scene like this could have on young adults — both women and men. The show normalized storylines that weren't otherwise present on TV. "Some people will go so far as to say watching an episode helped save their life because of the gravity of the issues that we've touched on," McDonald explains.

Over the years, Degrassi covered everything from self-harm to school shootings to abortion to eating disorders and so much more. "We were sort of a friend to [viewers]. They would turn on their TV and they'd say, 'OK, even if someone in my real life isn't going though this, I'm not alone.'"

And yes, that message totally translates to that awkward getting-your-period-in-class situation. "If any young girls happen to be reading this and feeling any sort of embarrassment, there should be none," McDonald says. "Emma set a great example for just being proud and unashamed of being who you are and being a woman."