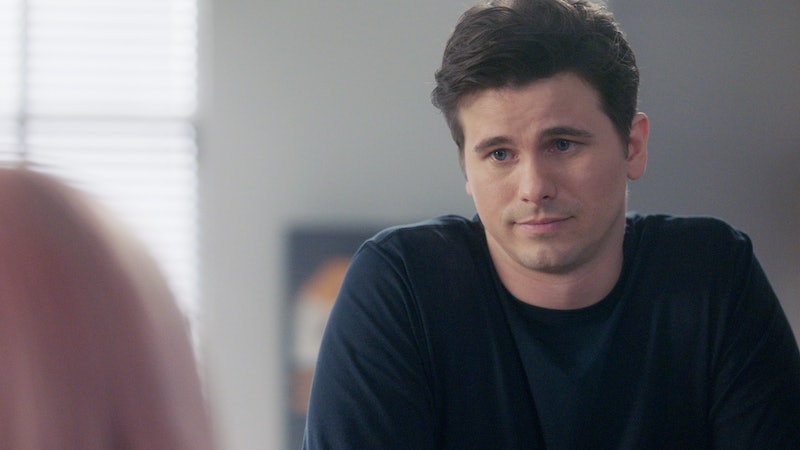 Spoilers ahead for A Million Little Things Season 2, Episode 10. Is your mouth also still hanging open after the wild A Million Little Things reveal that Eric didn't have heart surgery? Earlier in the episode, he'd almost accidentally exposed his chest to Maggie while taking off a sweater and he instantly looked nervous that Maggie had seen too much. Maggie assumed that he was just embarrassed about his surgery scar. But, at the end of the episode, Eric took his shirt off once Maggie left, and he doesn't have a scar at all. So he's definitely not the recipient of her brother's heart transplant, and everything we know about Eric is now called into question. If Eric even is his real name.

Eric initially came into Maggie's life via her mother Patricia, who had reached out to Eric in a letter — hoping to connect with the man her dead son's heart had gone to. Eventually, Eric emailed Patricia back and they began a friendship. Once Maggie met him, they became close as well. Because Patricia was the one who initially reached out, it doesn't seem like Eric intentionally set out to deceive the family. But he's certainly doing so now.

It's possible that Patricia's letter was delivered to the wrong address and Eric got it instead of the actual heart recipient. Maybe he felt bad for her so he answered her letter and he didn't know how far it would go. Eric told Maggie that Patricia had initially written to Eric after Maggie was diagnosed with cancer. "The only reason she reached out to me is because she was terrified of losing you," Eric said. That must have been a tough letter to receive. Maybe he thought he was doing Patricia a favor for being there for her through such a difficult time. Or perhaps Patricia got the wrong name from the hospital when she wanted to reach out and Eric ended up in her life instead. Whatever happened, it doesn't seem like Eric is a villain — he's just in too deep now. But that may be audience bias towards the lovable Jason Ritter who plays Eric.

"Jason, I can’t imagine anyone else playing Eric because he brings an innocence and you give him inherently the benefit of the doubt," show creator DJ Nash told Deadline. "Yet, there’s obviously something going on, and as we discover what it is. It pushes the limits of what we’re willing to accept because he’s doing something and keeping it from Maggie, whom we love."

It does seem like Eric plans to tell Maggie the truth at some point. That's what he said in his mysterious phone call in Episode 9. He was talking to someone on the phone while helping Maggie move and he said, "I'm gonna tell her. Now is not the right time." But is there ever a right time to undo a lie like this? The last time Maggie was lied to it was by her mother who had kept Eric a secret. Maggie didn't take it well, to say the least, accusing her mom of lying and then only revealing the truth to make herself feel better. Maggie's reaction to Eric's existence probably only furthered his fear of telling her the real truth.

Ritter once summed up his Eric storyline to TV Line by saying, "Eric is doing a super-complicated, delicate sort of dance. He's trying to navigate a super-complicated situation, and he's trying his best." But his best may not be good enough where Maggie is concerned, especially if his reason for being in her and Patricia's lives is more sinister than just an accidentally intercepted letter and a misunderstanding. However, perhaps the betrayal will push Maggie back towards Gary — who has never trusted Eric. That's really the least this Eric storyline can do, now that he's a giant liar and all.