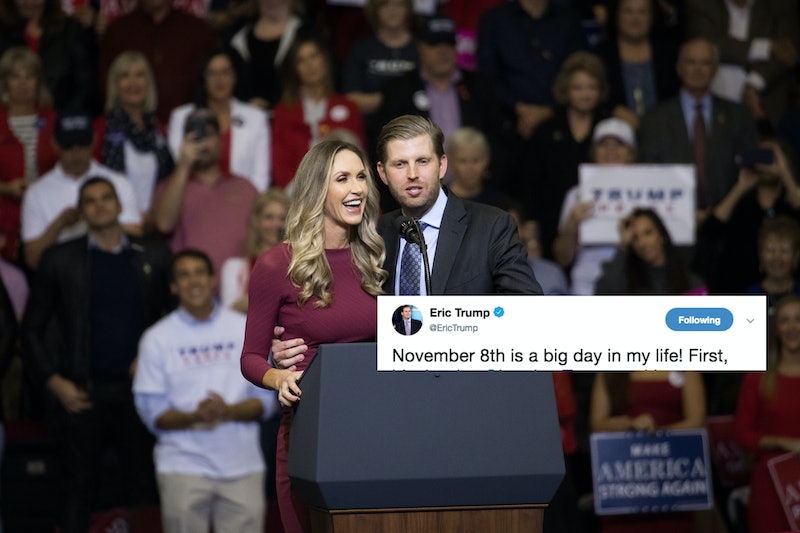 November is a month that often carries a lot of political significance in America, and for members of the Trump family, apparently personal weight as well. On Thursday, Eric Trump celebrated his wedding anniversary, as well as the two-year marker since his father won the 2016 presidential election.

"November 8th is a big day in my life!" he wrote on Twitter. "First, it’s the day ⁦@LaraLeaTrump⁩ and I got married! It’s also the day we won the election! Hard to believe it has been 4 and 2 years ago respectively!" He added three American flag emojis to his tweet (which, you might have noticed, is his emoji motif of choice), as well as photographs from his and Lara Trump's wedding day, and the Trump family as it watched election returns.

The youngest of the president's three children with former model Ivana Trump, Eric currently serves as an executive vice president of the Trump Organization, alongside his older brother, Donald Jr. Lara is an adviser to the president's 2020 campaign, and spent the last few months campaigning for various GOP candidates ahead of the midterm elections. The two were married at Mar-a-Lago, the president's Palm Beach, Florida, estate in 2014, and last year announced the birth of their son, Eric Luke Trump.

Eric and Don Jr. took over in leadership roles when their father became president, supposedly in order to dispel any appearance of a conflict of interest between the presidency and the Trump Organization's business ties around the world. "We don’t talk about the business," Eric told Fortune last year. "At most it’s 'How’s Turnberry? Turnberry’s great,'" referring to the Trump estate in Scotland. "A profit or loss in a quarter, that’s it." Despite the shift in the power structure, however, the president still maintains ownership of the company.

Eric's sister Ivanka also used to hold the position of executive vice president in the family business, but gave it up when she became an adviser in the White House. Still, that split between business and politics in the Trump family only seems to go one way. Eric has made frequent media appearances in the last few months and hit the campaign trail alongside his wife, Don Jr., and Don Jr.'s girlfriend, former Fox News host Kimberly Guilfoyle, to show support for Republican midterm candidates.

"The Trump sons are seen as an extension of their father," a Republican strategist told Business Insider. "Voters view them as sort of the messenger for their father's policies and they've done a very good job embracing that."

Lara has similarly taken on the president's tone in her media spots, calling midterm campaigning a "family ordeal." She also referred to the migrant caravan as "an invasion," on Fox's America's Newsroom, and insisted that Florida Democrat Andrew Gillum's platform was "socialism" (it's not) and would result in a national crisis like the one currently facing Venezuela.

But don't think she forgot her anniversary. She posted to Instagram twice on Thursday — one for her and Eric's wedding, and one for the presidential win.