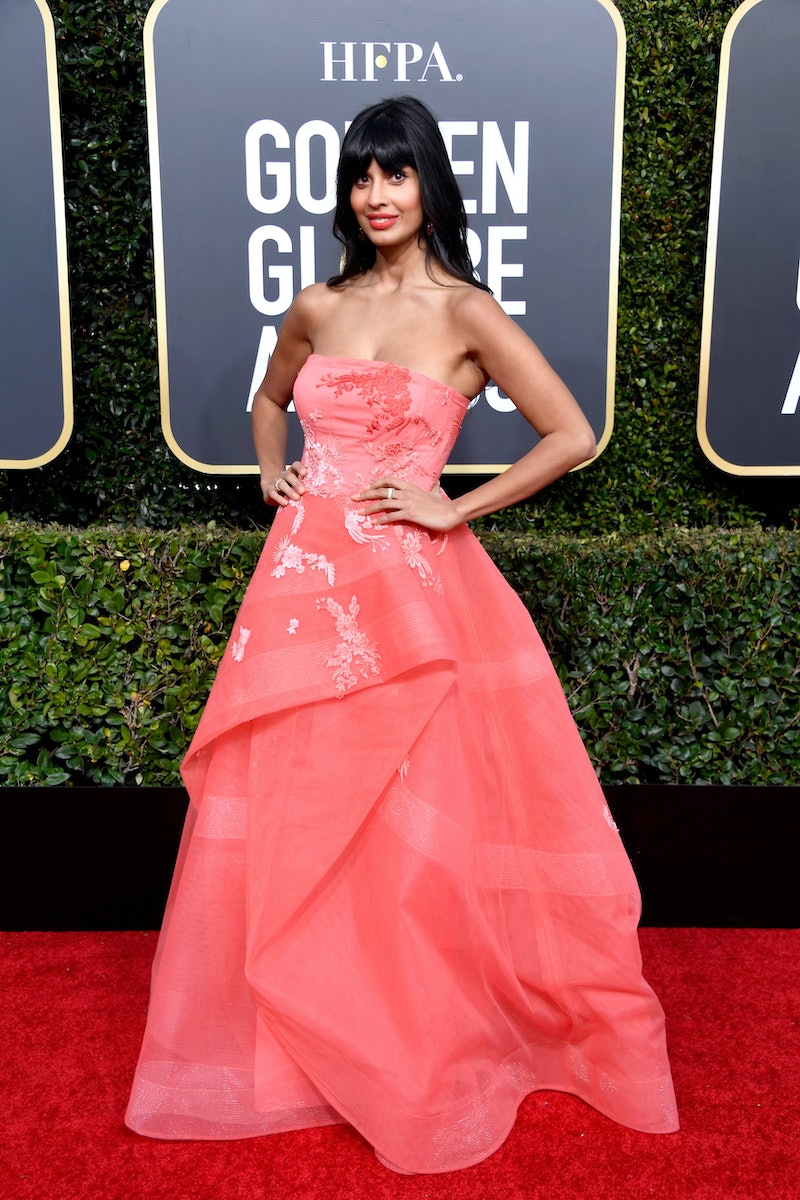 The network behind the "What the fork?" moment of the 2019 Golden Globes is forking sorry. E! has apologized to Jameela Jamil for crediting her as her The Good Place character’s sister last Sunday during their coverage of the Golden Globes red carpet. As a mea culpa, E! gave Jamil a monogrammed bag— and yes, they did get the initials right. The network also sent her a handwritten note that reads, “Jameela, We forked up— sorry! Love, your friends at E!” But did they fork her name up on purpose, or was this extremely meta joke actually just a forking accident, hm? Hm?

Whatever the case may be, Jamil seems very here for E!'s fork up. While being mistaken for her famous sister at an award show would undoubtedly drive Tahani Al-Jamil up a wall, Jamil sure appears to get a kick out of being misidentified as Kamilah Al-Jamil at the Golden Globes. Again, considering everything we know about Tahani and her relationship with with her revered younger sibling, this name switcheroo is salt on a wound that was created by an enormous gold statue of her revered younger sibling. Tahani would not be happy about this, and The Good Place actor is extremely happy about that.

“Oh my god @enews sent me a Clare V bag with my initials on it to say sorry about the prank. GUYS while I am 100 percent going to keep this beautiful bag, DON’T be sorry. It made my night and was my favorite thing about the Golden Globes this year.”

She doesn't want your apology but she does want the purse, which feels like a very Tahani response.

This very meta name goof really landed for a lot of people— especially with the actor who plays Kamilah Al-Jamil's sister on The Good Place. A little while after the red carpet segment ended and the award show began, Jamil addressed the gaffe on social media. “This is legit the funniest thing I have ever seen,” she tweeted along with a screen grab of the name error. “What a joyous mistake. Tahani would DIE! LOO LOL LOL. #witherTahani” A few minutes later, she added,

“Hands down the greatest of red carpet jokes from whoever did this. It’s made my night.”

Jamil also responded to “When your fictional sister from The Good Place steals your spotlight at the Golden Globes” becoming a moment on Twitter that night, writing, “It’s just TOO FORKING GOOD!”

Near the end of the red carpet coverage, E!'s Nina Parker addressed the Jameela/Kamilah moment and chalked it up to being a live TV program. "Jameela Jamil, we know your name," Parker said. "I mean, how could we not? Alright, it's live, it happens."

It does happen, and hey, sometimes it gifts The Good Place viewers with a beautiful gem of a reference. The show's had a good laugh, Jamil has a brand new monogrammed bag, and Kamilah got a shoutout at the Golden Globes. Oh, and Tahani continues to exist in her sister's omnipresent shadow. Son of a bench.