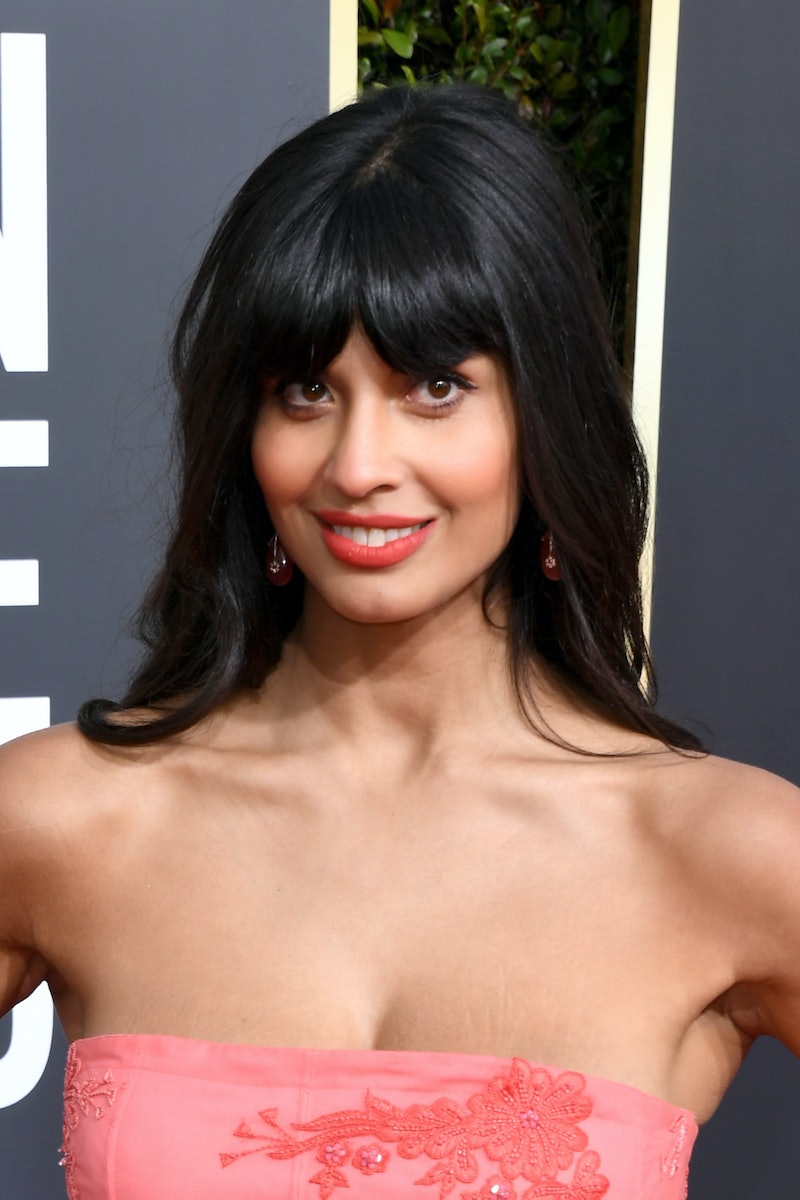 Jameela Jamil is definitely not one to hold back on how she feels. And she just made it clear that she is also all for wearing whatever she wants, whenever she wants as well — whether or not it breaks traditional red carpet rules. At the 2019 Golden Globe awards, Jamil decided to wear a pair of jeans under her strapless, pink Monique Lhuillier gown — but you'd never know it by just looking at her.

On her way to the Beverly Hilton Hotel, where the awards are being held Sunday night, The Good Place actress shared a video on Twitter, revealing the pants she wore under her dress, as she pulled up in couture gown in her limo. Captioning the clip, "An experienced woman wears jeans under her golden globes gown because it’s forking COLD," the star made no qualms about opting to keep warm during the big night. And honestly, who can blame her?

Fans on social media seemed to love the unpredictable style hack, calling Jamil a "queen," and praising her for making her comfort paramount.

Denim aside, Jamil's entire look for the night is definitely one to be remembered. The actress had her hair styled by Terrie Velazquez Owen, wearing her signature locks down, with side-swept front bangs, and did her makeup herself, she shared on Instagram, opting for winged eyeliner, dark, voluminous lashes, and a soft pink lip that matched her gown.

It's no surprise that Jamil would decide to do her own makeup for one of Hollywood's biggest nights. Back in Sept. 2018, she opened up to Marie Claire about why she isn't so focused on aesthetics, despite being in the public eye.

Tonight is a big night for the actress, who is attending the Golden Globes for the first time this year, seeing as her hit series The Good Place is nominated for Best TV Series, Comedy. Co-star Kristin Bell is also up for Best Actress for playing Eleanor Shellstrop in the NBC series, that also streams on Netflix.

Jamil also shared that she supporting Time's Up X2, which builds on the original movement, launched last year, in response to the several sexual assault allegations against powerful men working in Hollywood.

The new campaign now wishes to "double the number of women in leadership and across other spaces where women are underrepresented," according to the Time's Up website.

"First, there is safety in numbers," the initiative wrote on the site. "Second, there is strength in numbers. And finally, everything will change when we have more women, especially women of color and women from other traditionally underrepresented groups, making decisions. Period."

Jamil has definitely made more than one statement tonight, all while looking absolutely stunning.