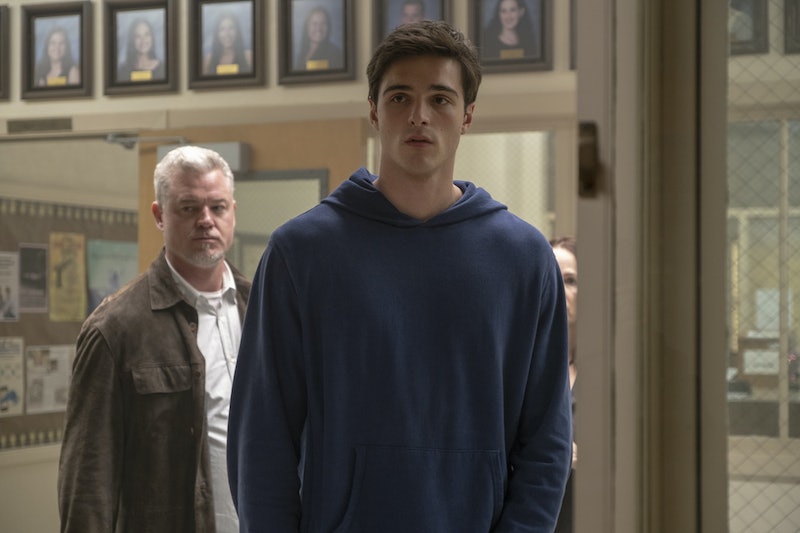 Spoilers ahead for the Euphoria Season 1 Finale. Throughout Euphoria Season 1, Jacob Elordi's Nate Jacobs has loomed large as the show's antagonist. Most of the character's lives have been warped in some way by his wealth, privilege, or rage, and it felt impossible that anything — or anyone — could strip him of his innate power. But in the Euphoria season finale, we see him finally hit his breaking point, and according to Elordi, it could be the beginning of a new Nate — for better or for worse. "I think [he's at] the end of the tether," the actor tells Bustle of his character.

Nate's father, Cal, began shaping him into what he considers the "ideal man" at a young age. He put Nate on a strict diet and fitness regimen at just 11 years old, and imbued him with messages of toxic masculinity. He told Nate that the world will despise him for his strength and talent, so he can never let anyone see him as vulnerable — something that, years later, has manifested in the callous manipulation of those around him, as well as outright violence. Cal has essentially tried to optimize and control Nate in the same way that Nate now does with everyone in his own life. And because of the DVDs a young Nate found of Cal having sex with various men and women, he formed a skewed perception of sexuality and relationships that's bled into his adult life; he was never able to have a conversation about what he saw or what it meant, and so, as with everything else, he simply buried it.

It's these years of repression and emotional trauma that finally cause Nate to snap. "It's years and years of building up and clenching his jaw and balling his fists ... the only thing to do is to confront his dad, who is this enormous lie to him," Elordi explains.

So, after Nate singlehandedly carries his football team to victory and his dad still finds a way to criticize him once they're behind closed doors at home, he decides to push back for the first time. He stands up, walks over, and gets right into his face — but even though, physically, he now towers over Cal, the power Nate wields over his peers is nothing compared to the power his father, as an adult and parental figure, has over him. Ultimately, he's still just a teenage boy who's scared of his dad. And when he looks over into the mirror and sees himself pinned down with his father on top of him, he begins to sob uncontrollably.

"There's a great frustration in that finale because when [Nate] finally stands up to him, he's powerless," Elordi says. "I think [he's] just this terrified, frightened boy exerting every single piece of his being into trying to combat the monster that is his father. And then when he sees himself [in the mirror] he realizes that it's fruitless."

The way the scene was shot is also symbolic. "It's reminiscent of the videos that Nate's watched [of Cal's hookups]," Elordi says. "He is in that position, and he is on the bottom, and so there's definitely something about it with him being in his underwear."

In that moment, Nate finally just cracks, creating a potent and terrifying encounter for both parties. After Nate begins to beat his own head against the ground, Cal runs from the room like Dr. Frankenstein, unable to comprehend the monster that he's created. "We see Cal absolutely terrified of his son and what he's turned his son into," Elordi explains.

It's an intense exchange, but Elordi believes that finally confronting his dad and having that breakdown has "cleansed" Nate — which hopefully means we'll see Jules and Maddy freed from his control in Season 2. When Nate speaks to Rue at the dance, he's painfully blunt, but he doesn't seem like he's trying to game her; he just seems resigned. "When [Rue] admits that she knows about his dad, he kind of like, softens in a weird way," Elordi says. "I don't think he's trying to do anything or trying to set anything up. I think for the first time, he's tired. He's done, to a degree."

Similarly, Elordi says that Nate "realizes that nothing good can come from [his relationship with Maddy]" and that his acknowledgement that their relationship is toxic is sincere. It's a step in the right direction, and Elordi believes Nate can genuinely change, but it will take time.

"I think, truly, he doesn't entirely know who he is," Elordi explains. "After the breakdown with Cal, we're starting to see him sort of take charge of his own issues ... but I mean, that's a pretty tricky past to just eliminate from your being, you know. There's a lot of baggage there."

Now that Nate has faced his own personal demons and relinquished at least some of his anger, is it possible we'll see a changed Nate in Season 2? Elordi isn't so sure.

"It could literally go anywhere. And I'm excited for it to go anywhere," Elordi says. Though, he adds with a laugh, "I personally would like to have a bit of a change, because it's super demanding to be so angry all the time."