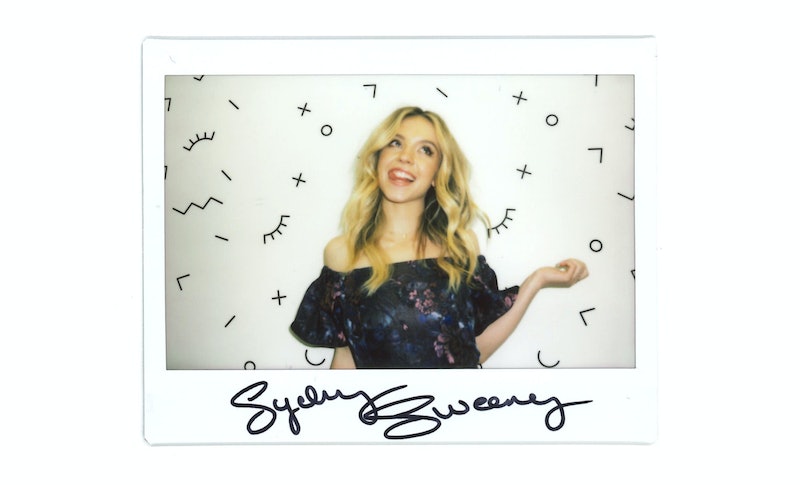 When celebrities hang out with Bustle writers, we want to give them the chance to leave their mark. Literally. So we hand them a pen, a piece of paper, a few questions, and ask them to get creative. The rest is up to them. This time, Euphoria star Sydney Sweeney is leaving her mark in the Bustle Booth.

For every character Sydney Sweeney plays, there is a book. It's one she makes herself, an extensive arts and crafts project that helps her think outside the screenplay. "It’s always from literally the day she was born to the first page of the script," Sweeney tells Bustle, noting she never actually uses anything from her own life. "So there’s an entire timeline of her life and then there’s all the different people in her life. Then I build maps of her world and just everything that could make her her."

To figure out her latest role as Cassie on HBO’s Euphoria, the 21-year-old went even further, creating "a very moody" diary from the perspective of the "chameleon-like" high schooler who's still figuring out who she is. It doesn't help that after nude photos of her go viral, everyone is trying to tell Cassie who she should be.

"I saw a lost character," says Sweeney, who appeared in both The Handmaid's Tale and Sharp Objects last year. "It’s so hard when you’re a teenage girl growing up in a world where everybody’s telling you you’re a slut. Are you supposed to pretend to be somebody who everyone wants to imagine you as? Or, do you find your own way through all of this craziness?"

This push and pull is something Cassie deals with throughout the season. "You get to see the backstory of her life and what she’s gone through that’s turned her to look for love in sometimes the wrong places," Sweeney promises. Finding one's way through the craziness, though, could be advice for any adults who are panicking over the teen show with all the penises.

“It was actually quite hilarious,” Sweeney says of the headlines inciting hysteria over the show's nudity, “because at first it was ‘30 penises in Euphoria’ and then a couple of hours later is was 50 penises, and then the next day it was 80 penises." (For the record, Episode 2 features 30.)

What's not funny, Sweeney says, is how these kinds of headlines are masking the real takeaway of Euphoria, which is while parents want to think sex, drugs, and camming aren't happening, their kids are saying differently. "When I go through my socials," Sweeney says, "the fans that are more towards the age demographic of the show are saying, 'This is the most realistic thing I’ve ever seen on TV.'"

That might have anyone over 25 clutching their pearls, since Euphoria doesn't hold back in its portrayal of what it's like to be a teen in 2019. But 21-year-old Sweeney, who will appear in Quentin Tarantino's Once Upon A Time In Hollywood this summer, is kind of jealous.

Learn more about Sweeney in her Bustle Booth questionnaire below.

More like this
In 'The White Lotus,' Leo Woodall Gets His Moment
By Gabrielle Bondi
'Bridgerton' S3 Teases Exciting Social Season For Penelope Featherington
By Bustle
Robert Pattinson & Suki Waterhouse Made Their Red Carpet Debut — 4 Years Later
By Jake Viswanath
Taylor Swift Fans Sue Ticketmaster For The Eras Tour “Ticket Sale Disaster”
By Jake Viswanath
Get Even More From Bustle — Sign Up For The Newsletter