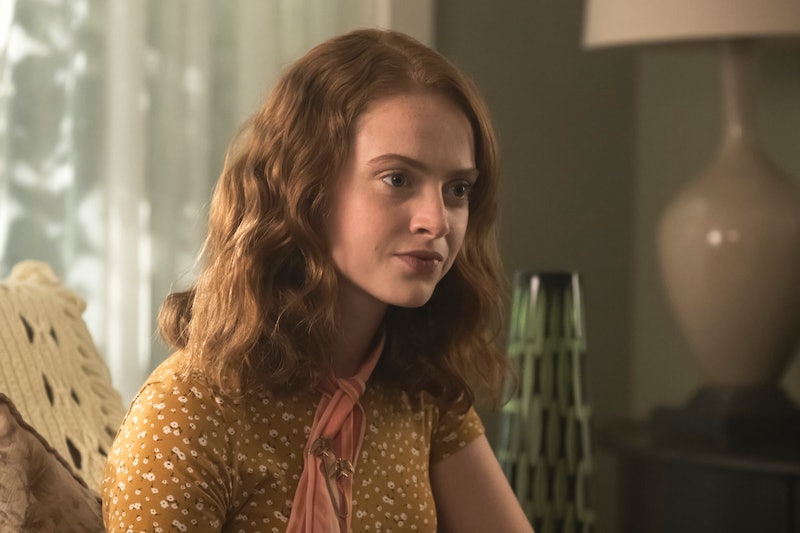 Spoilers ahead for Riverdale Season 3, Episode 19, "Fear the Reaper." Just when you thought Riverdale couldn't get any wilder, the CW show goes and reveals a secret marriage. In the April 24 episode, not only did we find out that Evelyn is Edgar Evernever's wife — and not, in fact, his daughter — but that the supposed high schooler is really 26.

According to actor Zoé De Grand Maison's IMDb bio, she's currently 23 and will turn 24 in May, so she could technically play a young-looking 26-year-old (and considering most of the actors playing teens on this show are in their 20s, it's pretty much par for the course). Evelyn's youthful appearance certainly explains how she was able to pass as a high schooler, which Betty uncovers after doing some of her classic Nancy Drew sleuthing.

Afterward, she tells social worker Ms. Weiss about what she discovered, saying, "[Evelyn's] been repeating her junior year — enrolling in different high schools, pretending to be 17 — for over a decade." Betty continues, "I think from what I found, Edgar works on the parents while Evelyn is sent to high school to recruit teens into The Farm. It's a cover for their cult." She then asks if Ms. Weiss can find out more information about Evelyn, but what she discovers is even creepier than either of them could have anticipated.

After Ms. Weiss tells Betty the redhead's true age, she then reveals the shocking truth that Evelyn is actually Edgar's wife, not his daughter. This is disturbing for several reasons: not only is the cult leader much older than her, but Edgar's also getting ready to marry Alice Cooper (or Smith, as she's calling herself these days). But when Betty confronts her mom about it, she responds that she already knows. In other words, there are some serious polygamous vibes happening on The Farm, and Betty is not here for it.

It's unclear how long the Evernevers have been married, but it's reasonable to assume that they got together before Evelyn turned 18. After all, Edgar doesn't seem to have any qualms about brainwashing people, giving them ultimatums between The Farm and their loved ones, or banning them from getting important vaccinations (what Evelyn calls "putting foreign substances into our bodies"). So would he really care about the age of consent?

This has huge implications for Edgar, who is getting shadier by the episode. While it's clear that he's extremely persuasive, we recently learned that The Farm is convincing people they're talking to their dead loved ones. We still don't know how they achieve this, but it's enough to recruit a terrifying number of members into their ranks, including Kevin, Principal Weatherbee, Cheryl, Toni, Alice, Polly, and more. Even Betty is nearly persuaded before she remembers seeing her niece and nephew floating above a fire, which is enough to shake her out of it.

Edgar preys on his victims' loneliness. As Toni tells Betty, she's been looking for a community like The Farm her whole life, and even the Serpents and Pretty Poisons couldn't fill that void. For others, like Alice and Cheryl, it's the chance to see their dead relatives again. As Chad Michael Murray, who plays Edgar, recently told Bustle, these Farm recruits are all desperate for something. "What is it that they're searching for that they found in this cult?" he said. "The Farm is giving them answers that they can't find anywhere else."

Murray continued, saying that Edgar's appeal stems from his magnetic charisma "and charm to get people to immediately let their guard down. You have to be able to lead people in a way where you know every single person's wants." Edgar not only knows each member's deepest desire, but how to utilize that to his advantage.

Although Riverdale fans — and Betty — have long known The Farm is bad news, we finally have proof of that malevolence. If Evelyn is lying to everyone about her age in order to gain their trust, what else are she and her husband hiding? Furthermore, if Edgar is already married to one woman and is planning to wed another, does he have other secret wives hanging around that we don't know about yet?

We don't yet know what Edgar's endgame is, but he clearly isn't going to stop until he recruits each and every person in Riverdale. And while we don't know Evelyn's backstory or how she got involved with The Farm in the first place, she's been brainwashed for a decade at this point, so it will be difficult for her to be extricated from her husband's firm grasp — if at all.