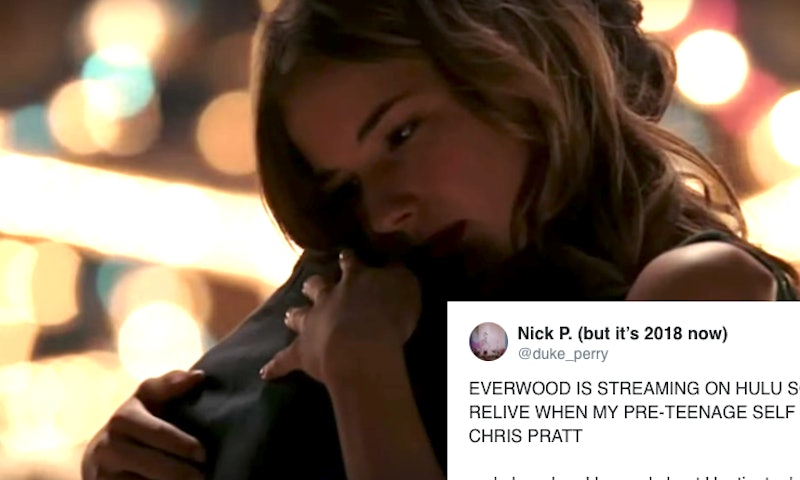 Ready your tissue boxes, because Everwood is now on Hulu. The WB tear-jerker has been off the air for more than a decade, but it's one of the few 2000s gems that had — aside from a stint on the largely underutilized CW Seed — yet to land a streaming home, where modern viewers can discover its story anew and old fans can relive all the heartwarming (and heartbreaking) moments that made it an early aughts classic. Let's remember: This is the show that first gave us Chris Pratt. Long before he played a lovable goofball on Parks and Recreation, he was the dim but endearing Bright Abbott.

The series, which ran for four seasons from 2002 to 2006, centers on the small town charm of Everwood, Colorado. Following the death of his wife, Dr. Andy Brown (Treat Williams) uproots his family from their home in New York City and moves to the rural mountains of Everwood in search of a fresh start. As an in-demand Manhattan neurosurgeon, he'd lost touch with his kids by prioritizing work, and much of the show centers around his efforts to rebuild their fraying relationships — and, someday, find love once more.

As an aspiring pianist with dreams of attending Juilliard, his 15-year-old son, Ephram (Gregory Smith), is initially reluctant to embrace Everwood, but soon falls for Amy Abbott (Emily VanCamp), sparking an on-again, off-again romance that becomes a driving force in the show. Ephram's 9-year-old sister Delia, meanwhile, is just doing her best to adjust to her new life and press forward without her mom. What results is a drama filled with sentimental reflections on love, family, and growing up that are wistful as they are touching. So much so that you're only mildly tempted to roll your eyes through all of the grand gestures and sappy platitudes along the way.

And apparently, the cast and crew think so too. They reunited last August for a panel at the Television Critics Association press tour, where they shared teary-eyed stories from their work on Everwood (executive producer: Rina Mimoun). "We were given emotional work to do, and when people are given work that deep and powerful, when you’re doing scenes like that with people, you’re opening up your guts," said Tom Amandes, who played Dr. Harold Abbott, of their continued closeness per Variety.

Even Greg Berlanti, now one of TV's most prolific producers, (see: Riverdale, Supergirl, Black Lightning, and the like), said it remains one of his most personal projects. "People who know this show probably know me better," he said, though he noted that, when he wrote the pilot, he hadn't gone through as much tragedy as his characters. He continued at the panel:

"[Everwood came from] wanting to put on TV subject matter that felt like it was in the news but not referenced in dramas. The cornerstone of it was that tragedy makes us real. When we suffer tragedy, we become richer, deeper, more meaningful people.”

Despite the emotionally intense subject matter, though, Everwood accrued a devoted fan base, and longtime stans are very onboard for Everwood's arrival on Hulu. "EVERYONE stop what you are doing. EVERWOOD IS STREAMING," wrote one Twitter user. Added another: "EVERWOOD is now on hulu. no one even try to contact me for the next three weeks." And Pratt's mentions are assumedly quite crowded. Who knows, maybe this will spark some reboot interest? Four seasons never seemed to be enough.

In any event, you can now add Everwood to your list of nostalgic shows to marathon — or if you missed it the first time around, finally catch up on all the hype.