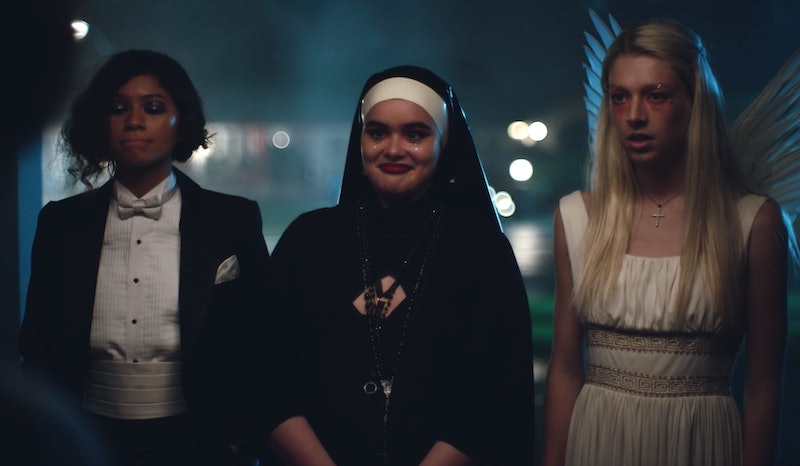 Spoilers ahead for Euphoria Season 1, Episode 6. With a drunken Shakespeare verse, a Bob Ross costume, and a nod to another famous HBO drama series, Euphoria had so many pop culture references in the newest Halloween episode, titled "The Next Episode." Sunday's episode continued with a closer examination of McKay’s backstory — one that’s wrought with heartbreaking high-pressure expectations and toxic masculinity. Elsewhere, Rue is concerned about a drunken Jules, whom viewers later learn is grappling with the aftermath of Nate coercing her into telling authorities that Tyler (the dude he brutally beat up in his apartment for raping Maddy) was the one to assault Maddy at the carnival. Back at the party, Kat receives oral sex while donned in a nun costume, Cassie makes out with a creepy Daniel dressed as Ted Bundy, and Nate appears in a bizarre prisoners’ costume (how appropriate).

"The Next Episode" was full of Euphoria's usual drama, but it was also jam-packed with Halloween costumes and pop culture references. Some were subtle, while others were pretty universal (Lexi's Bob Ross costume was instantly iconic). Below is a breakdown of every Halloween costume on Euphoria, and all of the other pop culture references you might have missed during the episode.

Could this be indicative of the turmoil to come? We all know how Shakespeare’s Romeo & Juliet ends. In "The Next Episode," Rue and Jules seemingly coordinate a Romeo and Juliet costume based on the 1996 version starring Leonardo DiCaprio and Claire Danes. Jules dons Danes’ infamous white dress and angel wings from Baz Luhrmann’s take of the classic tale.

Later, when Jules drunkenly stumbles into the pool, she recites lines from Act II of the play: "Although I joy in thee, I have no joy in this contract tonight. It’s too rash, too unadvised, too sudden, too like the light in which thou doth cease to breathe."

While Rue and Jules channel a Shakespearean classic in the episode, Cassie channels the 1993 drama mystery True Romance. Early in the episode, she reveals she’s dressed as prostitute Alabama Worley from the film, depicted by Patricia Arquette. Adapted from a Quentin Tarantino screenplay, the film follows a comic book nerd (Christian Slater) who falls in love with a prostitute (Arquette) and embarks on a trip to California with a suitcase of cocaine in tow.

Elsewhere at the party, Lexi donned an iconic Bob Ross costume. Rue's childhood BFF channeled the tranquil painter of PBS fame despite qualms that "the whole point of Halloween is to look attractive." She’s Bob Ross! The painter from PBS! We have no choice but to stan.

In one of the greatest pop culture references in the episode, Rue pulls aside one half of McKay’s younger twin brothers during the Halloween party to let it be known that she is not to be trifled it. The interrogation — which stems from one of the twins’ interest in Rue’s younger sister Gia — paralleled the HBO drama The Wire, which followed the Baltimore drug scene through the lens of both drug dealers and law enforcement. In the scene, Rue hilariously name drops characters from the HBO drama while threatening Troy.

Elsewhere, Maddy and Nate make an appearance at the Halloween party as a couple to the shock of Rue and the gang. There, Nate is dressed in a prisoners’ costume (is this a metaphor or just a straight up troll?), while Maddy pays homage to Jodie Foster in her 1976 crime film Taxi Driver. The film follows Travis (Robert De Niro), a nighttime taxi driver who attempts to liberate an underage prostitute named Iris (Foster) and presidential campaign worker Betsy (Cybill Shepherd).

Reddit user @mantistobogganmMD astutely mused of the costume, "There’s probably some symbolism between Maddy and Nate and Iris and Travis seeing as Nate sees himself as Maddy's protector."

Could all of these costumes and pop culture references hint at storylines to come? With just two episodes left, fans will have to wait and see how these narratives play out.