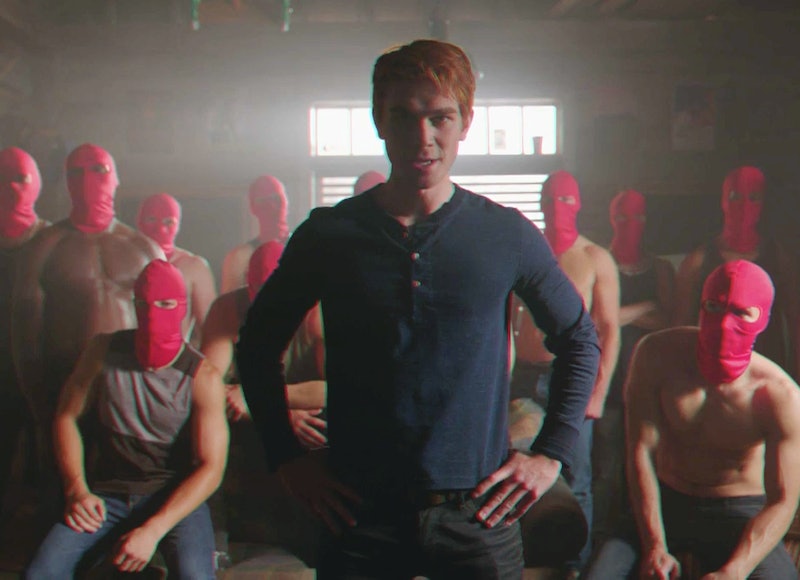 Have you heard the good news? Archie is hot now. In nearly every episode of The CW's Riverdale, Archie Andrews gets the opportunity to remind the audience, and the world, that he is, beyond question, really hot now. So hot, in fact, that Riverdale keeps finding inappropriate times for him and other citizens to remove their shirts while coping with and attempting to solve various murders. These shirtless Riverdale scenes may not help solve the murder of Jason Blossom or unmask the Black Hood, but would Riverdale even be Riverdale if they didn't exist?

Sometimes, it makes sense for these characters to have their shirts off. It would be weird for a character to keep their shirt on while in a pool or while changing. But the context must be considered, and the context here is that these characters are all teenagers adapted from the Archie franchise. They used to be in a band and sing "Sugar, Sugar," and now they're throwing their shirts off every chance they get. If it's not inappropriate, it's at the very least jarring.

Nearly every moment a shirtless Archie, or a shirtless other major character, appears in Riverdale is inappropriate for one reason or another. While being shirtless during a nighttime jog might make sense, taking off your shirt to create a video announcing that your vigilante group is hunting down a serial killer is literally bizarre. These moments may seem wrong on paper — and Riverdale wouldn't be Riverdale without them.

In The Beginning, There Were Abs...

Riverdale doesn’t even hit the four minute mark before Archie is removing his shirt in front of an open window — clearly visible to his next-door neighbor, Betty. In what is Archie's very first scene in Riverdale, he seems to be using his cell phone camera to make sure his hair is perfectly messy, insulting everyone by acting like he doesn't know he's hot. The show introduces the character by announcing that he "got hot," and time and time again reminds the audience of this. But Archie's hotness isn't just an aspect of his character, no. The fact that he wasn't hot and now is ends up being a defining trait of how everyone interacts with this redhead.

Then That Towel Drop

High school male locker rooms are a confusing world – but it's hard to image that Archie would be so surprised that he nearly goes bottomless in addition to topless. This occurs in Riverdale's third episode, meaning that they've already featured Archie getting shirtless enough times in the first three hours of the series to now make fun of how often he does not wear a shirt. It only gets more inappropriate from here.

And Then Betty Goes Dark

Getting revenge on a sexual predator? Appropriate. Donning a wig and removing your shirt so that you can nearly boil someone alive to avenge your sister by accessing some dark alter-ego? Less appropriate. Dark Betty doesn't come out much, but you can bet that, when she does, she'll be leaving the shirts behind.

And Remember When Archie Got Sweaty?

Some people wear shirts when they exercise, but Archie is not "some people." Abs like his were not meant to be restrained – especially when he's finding time to take out his stress on a punching bag between schoolwork, pursuing music, football, and finding Jason Blossom's killer. There's no room in that schedule for extra post-workout laundry.

Oh, And Jughead Is Hot, Too

Everyone who watched the first five minutes of Riverdale knows that Archie is hot now — but what about Jughead? How hot is he? Is he too hot? These are the questions that everyone was asking, and Riverdale graciously answered them in the first half of Season 1. A look into Jughead's morning routine confirmed that Jughead, like Archie, is absolutely ripped. Despite being in good shape, this is only one of two major shirtless Jughead moments — could this be the true reason Jughead thinks he's a Riverdale "weirdo"?

What better way to let off steam in Riverdale than to get a bunch of your boys together, take off your shirts, and splash some beer around without actually drinking any? Where did those masks come from? Do one of these athletic teens carry animal masks around in case someone decides to take their shirt off? Why are they holding red cups when they clearly cannot drink through those masks? This teens aren't just being inappropriately shirtless; they're being irresponsibly shirtless.

Perhaps the most inappropriate thing about this exhibition of Archie's body is that Jughead isn't also shirtless. When guy friends have a sleepover, is it usually an all-shirts off or an all-shirts on situation? If it's warm enough to sleep shirtless, why is Jughead wearing a shirt and a blanket? The mystery of the Black Hood's identity has nothing on the questions that this scene poses.

Of Course, There Was A Big Finale

If you thought Season 1 of Riverdale wouldn't end with a sequence in which the two main couples pull each other's shirts off, then you haven't been paying attention. This isn't Mindhunter or The Handmaid's Tale we're talking about; we're talking about Riverdale, the only town on television that is no-shirt, full-service (full-fanservice, that is). Besides, is there a better way to celebrate having solved an acquaintance's murder than throwing each other's shirts to the ground? Archie, Veronica, Betty, and Jughead believe that there is not.

Imagine that your boyfriend's father has been shot by a masked man and taken to the hospital. There's a chance that your beloved's dad won't survive, and your boyfriend takes a shower to literally wash his own father's blood off of him. What do you do? If you answered "Give him some space," then you are not Veronica Lodge.

With the Black Hood on the loose, Archie needs to be ready to fight back at any time. This apparently extends to being perpetually shirtless when he's in his own home. It's no wonder that Archie is walking around shirtless when he's also at his most vulnerable; Riverdale seems to enjoy making its characters physically naked whenever they're being emotionally naked. Archie is on the defensive, but The Black Hood should think twice before stepping to him. As they say, "The best offense is a good defense, and a good defense is to maintain a perfectly chiseled torso."

And, Finally, The Red Circle

Are you scared of these brawny dudes? Does fear strike your heart when you see a team of sturdy teens in red masks? Archie is clearly hoping that the sheer ferocity of these abs is enough to get the Black Hood to cease his murder spree. Of the 12 hooded figures that make up The Red Circle, only five are shirtless, which still adds up to 30 bare abs coming for the Black Hood — an impressive number by any standard. Oddly enough, Archie himself prefers to keep his shirt on and his face bare.

In a way, Riverdale is all about taking your shirt off. Characters take "shirts" off and put "shirts" on depending on who they're trying to be. And the entire town of Riverdale is slowly taking its bright, sunny shirt off to reveal the dark scars that lie beneath. Basically, as long as the show is on the air, shirts will always be taken off of bodies, and it may be for a deeper reason than just showing off Archie's abs.

But, sometimes, it will just be an excuse to show off Archie's abs. And that's OK.