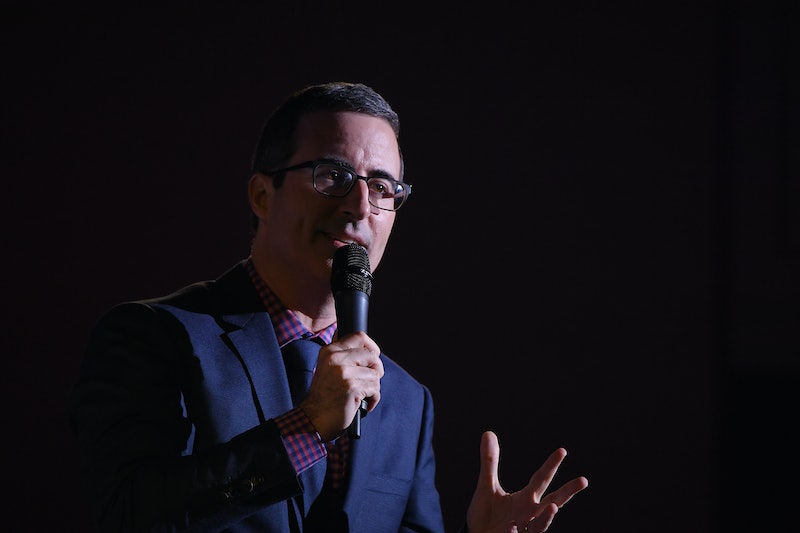 As John Oliver grilled him about allegations of sexual harassment, Dustin Hoffman defended himself to the disappointed groans of the audience. The HBO host brought up recent claims, asked Hoffman unapologetically direct questions, and pushed back when he didn't think the response was good enough. And while some women in the audience cheered Oliver on for holding a powerful man accountable, there are lessons every man should take away from Oliver's questions for Hoffman.

The HBO host was present to moderate a film discussion between Hoffman, producer Jane Rosenthal, director Barry Levinson, and actor Robert De Niro for the 20th anniversary of the movie Wag The Dog. The 1997 black comedy was a satirical film about a politician's sex scandal starring De Niro and Hoffman. But during the later half of the panel, Oliver turned his attention to a recent accusation that Hoffman groped a young intern on the Death of a Salesman set in 1985. Oliver said that it was a necessary and uncomfortable subject to broach because "it was hanging in the air."

In October, Anna Hunter Graham accused Hoffman of grabbing her butt and making vulgar sexual jokes when she was a 17-year-old intern on the set of Death of a Salesman in a guest column for The Hollywood Reporter. Hoffman responded to the accusation and said, "I have the utmost respect for women and feel terrible that anything I might have done could have put her in an uncomfortable situation. I am sorry. It is not reflective of who I am."

From self-reflection to accountability, Oliver's questions for Hoffman provide some critical insight into how men can ask themselves certain questions when they have been accused of inappropriate behavior but also when they hear allegations of sexual harassment against someone they know.

1. Am I Dismissing Someone?

Taking issue with the apology Hoffman gave to his accuser, Oliver said:

It's "not reflective of who I am" — it's that kind of response to this stuff that pisses me off. Because it is reflective of who you were. If it happened — and you've given no evidence to show it didn't happen — then there was a period of time for a while when you were a creeper around women. So it feels like a cop-out to say, "Well, this isn't me." Do you understand how that feels like a dismissal?

Trying to fully to understand how one's response could be a dismissal of the accuser is critical. It sheds necessary light on how many women's complaints are simply brushed aside by responses that don't center the victim's grievance and only focus on the accused person's character.

Ask yourself: is your response a true acknowledgement of someone's complaint and a vow to be and do better or is it simply a dismissal of the person's grievance? If you're responding to a claim of sexual harassment regarding someone else, ask yourself the same question.

2. Am I Trying To Explain In A Way That Hurts The Victim?

In an attempt to give context to the situation, Hoffman claimed that there were certain "stupid" things film industry people did in their professional settings. "That was 40 years ago," Hoffman. Oliver responded, "It just feels like a dismissal or re-contextualizing is not actually addressing it. It doesn't seem self-reflective in the way that the incident demands."

Re-contextualizing is when someone gives context about an incident in order to make it more comprehensible and perhaps even acceptable to those who were not there. But it's an act that often slides the focus away from the pain caused by the accused. A response should be a sincere apology, not a lengthy re-contextualization of events that inadvertently removes blame away from yourself.

3. Why Didn't I Say Something?

Allies can help victims of sexual harassment by speaking up for them. During the panel discussion, Oliver said, "I can’t leave certain things unaddressed. The easy way is not to bring anything up. Unfortunately that leaves me at home later at night hating myself. ‘Why [...] didn’t I say something? No one stands up to powerful men."

No one should ever ignore a sexual abuse accusation made against someone they know. In fact, there are many things you can do to confront the issue head-on. It's a civic responsibility of men to confront the person who was accused, instead of letting the accusation fester on its own. After all, ignoring the issue is a form of complicity, and it only allows more abuse to go on.

4. Will My Response Discourage Someone From Coming Forward?

During the Monday night exchange, Hoffman asked if Oliver believed what Hunter wrote. The HBO host said, "I believe what she wrote, yes. Because there's no point in her lying." Hoffman retorted, "Well, there is a point in her not bringing this up for 40 years." Oliver responded by holding his head in his hands and said, "Oh, Dustin."

Oliver's exasperation has a point. Some people wonder why an accuser sometimes takes weeks or months or years to bring up the issue of being harassed or abused. Research on victims of sexual harassment and abuse shows that many never come forward to speak of the abuse they have experienced simply because of shame.

According to the Maryland Coalition Against Sexual Abuse, survivors of sexual abuse cite a plethora of reasons for not coming forward. Among those reasons are fear of retaliation, not trusting the justice system, and feeling embarrassed that others would know.

So, technically, there is a point in Hunter not speaking up 40 years ago, and that point could be that she may have feared retaliation until she saw dozens of women come forward with their own accounts of sexual abuse in the entertainment industry. After all, like feminist attorney Gloria Allred said, "The more women speak out, the more other women want to speak out."

For men, this question is critical in understanding whether their own response, like Hoffman's, could end up discouraging other victims from speaking up.

During the controversial exchange, Oliver asked Hoffman about his statement and said, "You’ve made one statement in print. Does that feel like enough to you?”

It's an extremely important question for any man to ask himself if he's apologized for his behavior. "Is this enough?" is actually asking oneself, "Have I shown enough support?" as well as "Is there something else I can do apart from listening to the accuser? Should I donate to organizations against sexual assault?" and more. In doing so, you can learn if there's something lacking in his response to an allegation but it isn't just for men who have been accused.

It can also extend to men who have heard about their friends or family engaging in harmful behavior toward other people. It's a tough question — and a much-needed one. It can be uncomfortable, but it pushes a person to evaluate their own commitment to tackling sexual harassment as someone accused or as someone who knows the accused.

It seems if as no one really expected the panel discussion to take such a heated turn, but Oliver's questions for Hoffman ultimately gave people a lot to think about. It might be only five questions, but thinking about them will ensure that people are held accountable for their actions and survivors of abuse are supported.