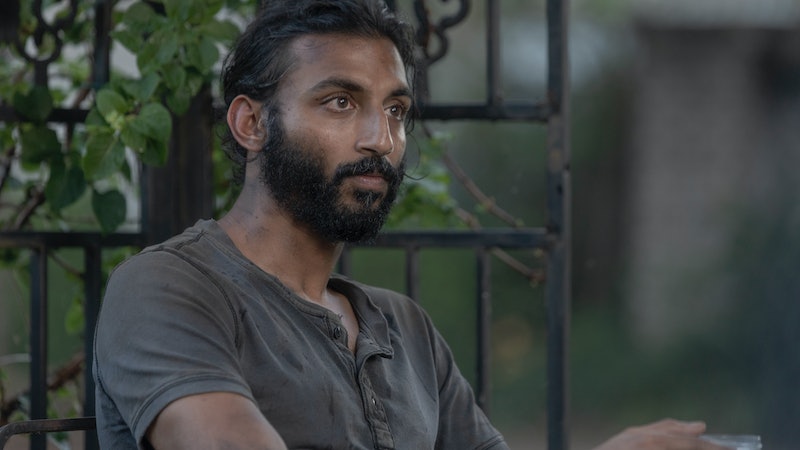 Spoilers ahead for The Walking Dead Season 10 Episode 6. Negan fled Alexandria at the right time — and that's not just because his life was on the line. A sickness in Alexandria on The Walking Dead is causing doctors Siddiq and Dante to go into panic mode as one by one, members of the community come down with it. Cheryl was the first person to be shown suffering the symptoms, but what started as seven people sick (including Rosita) turned into a large part of the community sick at the clinic, looking sallow and weak. So is this just an inevitability of community living in the zombie apocalypse? Or is some more nefarious element to blame?

Siddiq and Dante only have herbs to battle this flu-like virus that comes with nausea and fever. And Siddiq panicked when he found out Dante was treating this possible epidemic without informing him. Siddiq apologized for his outburst, but later he had a vision that seemed to legitimize his deepest fears. He was rocking Coco to sleep and looked at her lips. Then, his eyes began to sleepily flutter as he heard a woman panting and a threatening voice call out, "Open your eyes." When he did, Siddiq was standing holding Coco by the windmill in a bleak Alexandria as the lone survivors.

With a major outbreak potentially on the horizon if Siddiq and Dante can't control this combined with Siddiq's freaky premonition, here are some theories about what's causing the virus in Alexandria.

It's Just A Bug

Back in the Season 4 episode "Infected," the survivors battled an aggressive strain of flu that was carried by the pigs Farmer Rick was raising. As that episode was written by current Walking Dead showrunner Angela Kang, maybe she wanted to revisit what can happen when illness spreads in the community. After all, like Dante said, "We're stuck with pre-industrial-aged meds and simple sh*t can suddenly become a big deal."

On top of these diseases not being able to be treated as survivors were once accustomed to, it can also lead to survivors becoming zombies rather suddenly — like what happened in "Infected." So while it's not a major twist, maybe it's no coincidence that just days before "Bonds" premiered, the YouTube channel for The Walking Dead posted Carol preemptively killing Karen and David to stop the spread of that Season 4 sickness.

With his loud personality, Dante didn't seem like he was a person who could be trusted initially. Yet, he showed a softer side when he bonded with Siddiq over his PTSD from being the only survivor of the Whisperer attack at the Kingdom fair. But perhaps he really is a villain of this season, especially since his TV character's trajectory has been different from his comic counterpart. Whether he ends up saving everyone or is responsible for the sickness, Kang told Entertainment Weekly that Dante "will play an important role in the story in Alexandria."

The Whisperers Poisoned The Water

Last episode, Gamma was found piling up walker bodies in the water by Alexandria. She was on orders from Alpha to damn up the creek as part of her attack to bring down the communities. Yet, a side effect of backing up the creek could be that the walkers are poisoning the water supply. Especially since Gamma was spilling their guts into the creek and Negan tainted his enemies' wounds with a similar method back in Season 8. Aaron saw Gamma, so you would think if there was a potential for contamination he would have warned the community. But even still, there's a possibility that the rotting walker guts in the water have made the Alexandrians sick whether that was part of Alpha's master plan or not.

Siddiq Knows The Cause

Siddiq's PTSD could be the reason for his vision of an abandoned Alexandria. But there have been theories floating around that Siddiq may be hiding a secret this season. CinemaBlend outlined the idea that Siddiq could be a double agent working for Alpha since the attack at the Kingdom fair. He may have even killed some members of the communities during the massacre by the Whisperers. If this theory pans out, it's to be seen if Siddiq is working for Alpha reluctantly or willingly. But there's a chance Siddiq has gone over a bit to the dark side and his conscience could be getting the best of him — especially if he knows how and why everyone is getting sick.

Hopefully, this is just Alexandria flu season and everyone will get out alive. But with The Walking Dead midseason finale approaching, this flu could be a sign of very bad things to come.