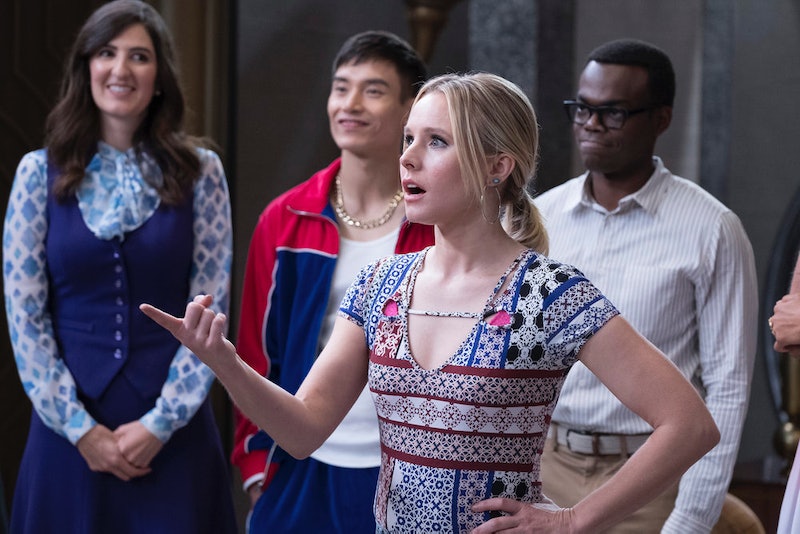 Major spoilers for the Season 2 finale of The Good Place!

The Good Place, even in its short time on the air, has become notorious for its incredible twists and turns, particularly that which came in its first season finale. Well, The Good Place Season 2 finale aired on Thursday night, and showrunners didn't fail to deliver — the four humans are alive once again. That's right — in one final last ditch effort to maneuver their way into the real Good Place, Michael, everyone's favorite evil mastermind turned ally, concocts a bright idea.

With the help of an all-knowing judge (Maya Rudolph, who is knocking the socks off this role), Michael sends Eleanor, Chidi, Jason and Tehani back to Earth in an effort to see if they still would have become good people had they not died. It brings into major perspective an idea that might have been lingering in the back of some fans' minds. Yes, the gang has been on a mission to be better, learn about ethics, and ultimately become the best versions of themselves. That's great, and they've worked hard. They really seem to want this. But, the reason they've thrown themselves into this so diligently in the first place is because they are trying to escape eternal damnation. "You're supposed to do good things because you're good, not because you're seeking moral dessert," the judge tells them when explaining why they still aren't Good Place material.

It rings pretty similar to the conundrum that landed Tehani in the Bad Place to begin with — yes, she did an incredible amount of charity work and likely produced a lot of good in the world, but she did all of that for the wrong reasons — out of vanity and desire for approval. So, Michael and Janet begin to monitor the humans' activity as they're thrust back to Earth, alive, to see if they will eventually prove worthy of the Good Place on their own. Eleanor was the first human's journey who viewers were able to observe, but hopefully not the last.

She starts out great — after narrowly avoiding a terrible shopping cart-related demise, she is determined to change her ways and become a better person. She quits the exploitative job at which she excelled, she fessed up some old mistakes to her friend, and she even joined an environmental group. Quickly, though, she begins to fall off the wagon. Being good is exhausting, after all. It takes real effort, and Eleanor starts to slip. Michael notices, and makes a little journey in order to pull some strings.

In what was a downright chill-inducing moment, Ted Danson once more planted himself behind a bar on network television. As he charmingly threw a rag over his shoulder, he gave a nostalgic nod to his old Cheers persona, Sam Malone, who tended bar on NBC for 11 seasons in the 1980s and '90s. As he posed as a bartender, Michael gave Eleanor a bit of a pep talk on being a good person, sneaking in the phrase "it's what we owe to each other," which hearkened back to an earlier episode of the show, and a good old-fashioned ethics lesson.

The discussion stirs something in Eleanor, prompting her to do some browsing around the web when she returns home, searching for some answers or direction. And, who does she stumble upon in a video delivering a speech on "what we owe to each other"? Chidi. Though she has no memory of him from the afterlife, obviously, she is drawn into the speech he gives — a three-hour lecture on ethics.

The episode concludes with Eleanor and Chidi, wiped of their memories and affections of each other, meeting as she approaches him to ask for guidance. It's exactly how Chidi suggested he might have met Eleanor on Earth when they discussed it in the previous episode — as she walks into his office asking for help with ethics. It seems that though Chidi and Eleanor are "real" soulmates as they were told at the very inception of the show, they still will manage to find their ways back to one another, no matter what dimension or state of life they happen to be in.

And with that, they did it again. The Good Place has managed to deliver a twist that, while probably not as severe and narrative-altering as the first season's finale, still will likely have viewers counting the days until the next season of the comedy. This is a show that continues to remain inventive as well as side-splittingly funny, and does so without losing what's most important to the story it's telling — its moral compass. The people behind The Good Place obviously have a plan up their sleeves, and, judging by tonight's social media reactions, they've got no shortage of people waiting to see how it all unfolds.