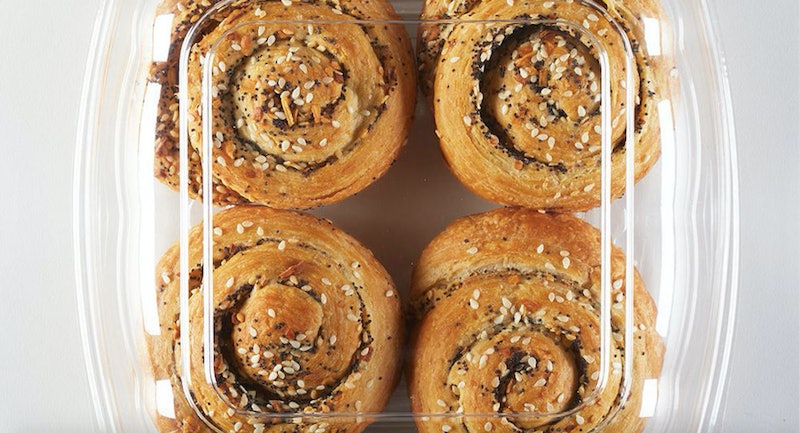 The gods of bakery mashups are shining down on us today. I’m not always impressed by the bakery hybrids that have come my way in the past. A cronut? Why not have the joy of a croissant and the joy of a donut — hell, why not have one in each hand? But this, this is something that I can get behind. It takes two things so naturally in sync, it’s almost as though they were always destined to be together — in fact, you’ll probably wonder why you haven’t seen a product this obviously delicious before now. Aldi's Everything Croissants are coming — Aldi's Specially Selected Everything Croissants, to be precise. That’s right, the seasoning of an everything bagel combined with the flaky goodness of a croissant. They launch on April 10, according to Delish, and they look like a flavor and texture bomb ready to explode in your mouth.

If you're a keen-eyed pastry lover, you may remember that Starbucks rocked some everything croissants in January 2018 to great success, so I'm incredibly pleased to see a new option available. I don’t know what it is about everything seasoning that gets us right where it counts — the garlic, the onion, the poppy, the sesame, the salt. It’s a flavor that is painfully underused in the UK, and whenever I'm back on American soil I gorge on everything bagels morning, noon, and night. But even a die-hard everything bagel enthusiast — and someone who knows that the bagel is the queen of all baked goods — can’t help but raise an eyebrow of interest and, well, salivate a little at the idea of Aldi Everything Croissants. Plus, according to Delish, you’ll be able to nab them for $3.89 for a box of four. A box of everything croissants for lunch? Don’t mind if I do. Maybe I’ll even pair them with a vat of cream cheese. This product is all about expanding horizons and thinking outside of the box, after all. Marking April 10 in my calendar right now.

If you’ve got more of a sweet tooth, don’t you fret. Aldi is catering to you, too, with two new frozen cheesecake offerings coming your way — Chocolate Caramel Toffee and a lemon option are waiting to give you that sugar rush you’re looking for, starting March 27, according to Delish.

Even though I’m a bagel devotee, it’s impossible to deny that these everything croissants look perfectly poised to expand our palates — using that ultimate bagel flavor to tempt our tastebuds into other baked goods. It’s a gateway croissant, if you will (and I certainly will). A lighter, flakier everything option, April 10 can’t come soon enough.