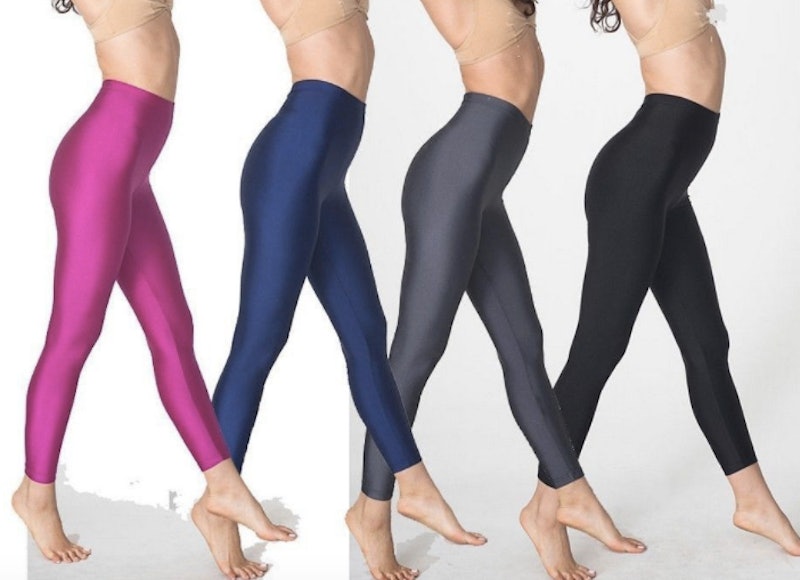 Leggings have an unsteady relationship with cultural attitudes — from people vehemently claiming they're not pants (psshh) to banning them according to stringent dress codes, they haven't always been welcomed with open arms. But the actual history of leggings is fun and colorful, and definitely deserves a moment in the spotlight.

It might seem like a simple basic, but the stretchy pants you know and love have hovered around the fringes of fashion for half a century. Sure, they've changed forms, colors, and prints, but always seem to stay inside our closets. In the '60s, women traded last decade's poodle skirts for form-fitting leggings, often made from space age knits. Leggings made their way from Studio 54 in the '70s, all the way to Jane Fonda's workout videos in the '80s and up to Lindsey Lohan's style diaries in the early noughties.

Nowadays, we're still loyal to the legging. From college kids wearing them with Ugg boots, to buying denim jeggings, to wearing a leather pair out for cocktails, leggings are still very much en vogue. The recent controversy surrounding United Airlines banning two passengers with leggings shows that leggings still have the power to start a conversation. Below, get comfy (hell, even put on some leggings) and learn all about this wardrobe staple's history.

More like this
The Best Heels For Bunions, According To A Podiatrist
By Margeaux Baulch Klein and Maria Cassano
Here Are All 703 Outfits Rachel Wore On Friends
By Kat George
Cyber Monday 2022 Is Around The Corner. Here Are The Deals To Expect
By Dominique Norman
The Best Black Friday 2022 Fashion Deals To Shop This Year
By Dominique Norman
Get Even More From Bustle — Sign Up For The Newsletter