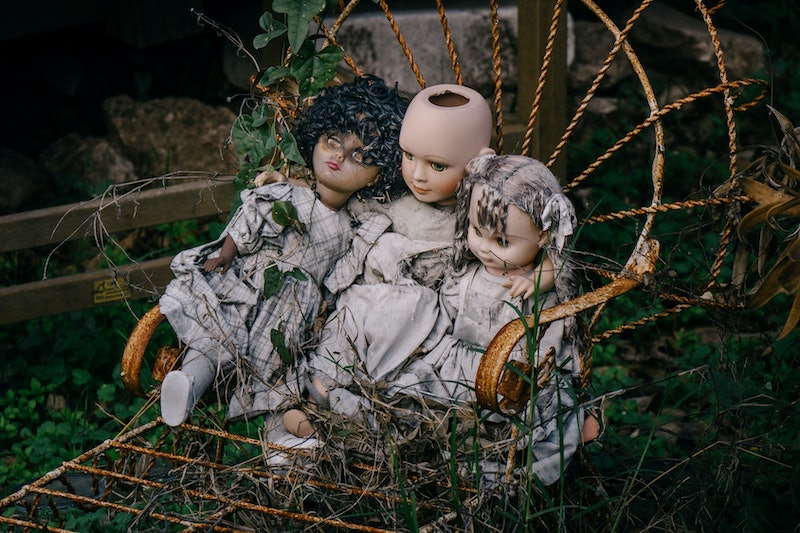 Good news for Texas-based ghost enthusiasts: The 2018 Nightmares Of San Antonio Paranormal Fest is coming — and this year, it’s going to feature an exhibit of haunted toys covering more than 500 years of spooky history. The exhibit will feature a collection of local, allegedly haunted dolls, too — so, no, you won’t just be reading about the history of haunted toys. You’ll be able to see the toys first hand.

Boy, do I wish I lived somewhere near San Antonio right now — especially since admission to the festival is free. I appreciate free stuff. I love spooky stuff. Clearly I need to start planning a trip to San Antonio.

The festival and exhibit are the brainchild of Curious Twins, a San Antonio-based “paranormal investigative and tour company that uses history, science, and psychic mediums to explore our environment,” according to the company’s website. They offer ghost tours, ghost hunts and classes, and psychic readings, in addition to organizing events from time to time — like, for example, the Nightmares Of San Antonio Paranormal Fest.

According to Curious Twins’ Facebook page, the 2018 festival will occur on Sept. 22 from 7 to 11 p.m. at the Brick at Blue Star Arts Complex, a really neat-looking event space that used to be part of an ice and cold storage company in San Antonio’s King William neighborhood. It’s the second year the event has been mounted; in 2017, they took over the Brick on Sept. 16 for a night of spooky fun including psychics, mediums, ghost stories, ghost photography, art, fashion, food and drink, and a costume contest.

The 2017 event occurred just weeks after Hurricane Harvey dissipated, which admittedly threw a few wrenches into the works; some vendors, speakers, and other participants who had originally been set to attend, including psychic readers and paranormal groups, ended up needing to cancel at the last minute due to living in affected areas. But despite a few complaints, many commenters on the event’s Facebook page wrote about what an enjoyable time they had, praising the music, costumes and cosplay, art, and milkshakes in particular. (Seriously wondering where those milkshakes came from; I do love a good milkshake.) Organizer Fred Garza-Guzman, who runs Curious Twins with his spouse, Stephen, commented a few times that the plan for future events was to make them bigger and better — and that’s exactly what it looks like they’ve done for the 2018 event.

According to the San Antonio Express-News, features Garza-Guzman has planned for this year’s festival include “ghost hunter booths, artisan and artisan venders, psychics, and a spirit communication class” — and, as the big headliner, an exhibit focused on haunted toys that will feature a local collection of haunted dolls. “[The exhibit] follows some of the biggest cases not just in America, but in the entire world,” Garza-Guzman said of the exhibit to the San Antonio Express-News. “People do get a chance to see these cool, interesting, and creepy toys for themselves.”

Allegedly haunted toys — and, in particular, allegedly haunted dolls — have long occupied a place in the darkest corners of our imaginations. Robert the Doll is probably the most well-known example; once the childhood companion of Key West-based artist Eugene Otto, Robert was said to move on his own and cause a substantial amount of mischief. When he was a child, Otto’s response whenever he got in trouble was to say, “Robert did it.” Robert is currently on display in the Fort East Martello Museum in Florida, where’s kept behind glass. It’s said that you must ask for Robert’s permission before you take his photograph — or else something terrible will happen to you.

Following the release of The Conjuring and its sequels, however, another doll has given Robert a run for his money: Annabelle. A Raggedy Anne doll that had been gifted to a nurse in the 1970s, Annabelle first told the young women and her roommate that she was the spirit of a girl who had become trapped in the doll’s body — only to be revealed later as a demonic possession instead. (Or at least, that’s the way the story goes; your mileage may vary, depending on whether you believe in ghosts and/or demonic possession.) Annabelle has gone down as one of the most notorious cases investigated by Ed and Lorraine Warren — second, perhaps, only to the Amityville Horror case. Like Robert, she’s kept under glass; you can see her at the Warrens’ Occult Museum in Connecticut.

I would imagine that Robert and Annabelle are unlikely to make appearances at the Nightmares Of San Antonio Paranormal Fest; they both have permanent homes elsewhere, and they don’t generally travel. Additionally, no details have been released about the specific dolls that will be on display during the festival. I’m curious, though, about whether the haunted toy exhibit will feature any of the Garza-Guzmans’ own artifacts. Yep: According to a profile of the “paranormal power couple,” as they're called, which was published in the San Antonio Express-News in May of this year, their home is chalk full of strange, potentially haunted items — including a spooky doll.

The doll, apparently, was gifted to them for their wedding (clearly their friends and loved ones know them well!); dating from the 1920s, the baby doll can sometimes be found facing a different direction than the one in which it was previously left. The owners of the antique shop from whence the doll came, whom the Garza-Guzmans know, also told the couple that sometimes they could hear laughter echoing near the doll even when the store was empty. (The whole profile is worth reading, by the way, especially if you're into weird, spooky stuff like I am.)

Regardless, it sounds like the festival and exhibit are set to be a spooktacular good time. (Sorry not sorry.) Admission to the festival is free, but according to the San Antonio Express-News, donations for the exhibit will be collected at it entrance. If you want to visit, be sure to stop by the Brick at Blue Star Arts Complex in San Antonio on Sept. 22, 2018 between 7 and 11 p.m.