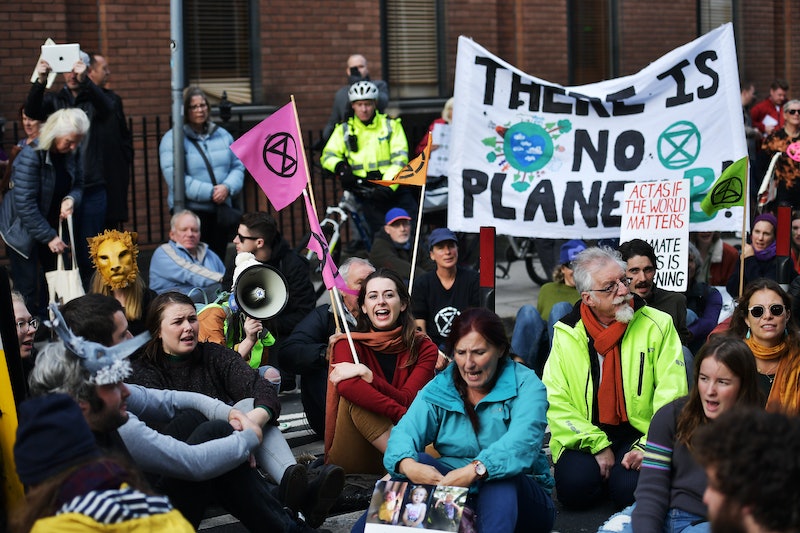 On Monday, Extinction Rebellion (XR) took to the streets of London again, to protest climate change. And at the same time this was happening, instead of supporting, or in fact saying anything productive, Prime Minister Boris Johnson insulted Extinction Rebellion protesters and claimed they should look towards Margaret Thatcher for inspiration.

Speaking at the launch of the third volume of Thatcher's biography, as BBC News reported, Boris Johnson said, “I am afraid that the security people didn’t want me to come along tonight because they said the road was full of uncooperative crusties and protesters all kinds littering the road.” He then added that the protesters could learn from Margaret Thatcher, saying, “I hope that when we go out from this place tonight and we are waylaid by importunate nose-ringed climate change protesters, we remind them that she was also right about greenhouse gases."

He continued: “And she took it seriously long before Greta Thunberg. And the best thing possible for the education of the denizens of the heaving hemp-smelling bivouacs that now litter Trafalgar Square and Hyde Park ... would be for them to stop blocking the traffic and buy a copy of Charles’s magnificent book so that they can learn about a true feminist, green revolutionary who changed the world for the better.”

There’s nothing more frustrating than seeing the prime minister ridiculing protests. How are we collectively meant to fight for change when the people in power seem to think it's all a big joke?

I must admit, from a lot of the footage I've seen and even passing through XR protests in the past, I’ve sometimes rolled my eyes at the majority-white, often middle-class crowd playing reggae music, or drums, and doing the downward dog in the middle of the road. The lack of diversity all felt a bit isolating. I know the climate crisis will affect mostly black and brown people first across the globe, but XR as a movement doesn't reflect this. I’m not alone in this concern. The grassroots collective for Indigenous, black, brown, and diaspora groups — Wretched of the Earth, wrote an open letter to XR voicing its worries in May.

It’s even something XR has addressed, saying, it is “working to improve diversity in our movement.” In fact, I think more care and thought needs to be put into considering race while protesting, especially when it comes to arrests and institutional racism. There have already been 541 arrests made during two days of protest.

But for some reason, I don’t think these are the concerns Johnson was trying to bring up when he referred to protesters as “uncooperative crusties”. Boris Johnson was attempting to ridicule a very serious and pressing issue and people's right to protest.

Secondly, the obsession with dismissing Greta Thunberg is getting tiresome. She is a true revolutionary. Considering Thunberg wasn’t even born when Thatcher was in power, Boris’ point is moot. How is pitting two women against each other going to help anyway? Especially when only one is living and fighting for change currently. Who is climate change going to affect now? It’s the young people, people like Thunberg whose dreams and childhood are being jeopardised by "empty words". It's people who aren’t even born yet. And for me, Thatcher was no feminist icon — just being a woman in a position of power doesn’t automatically make you a feminist. In fact, as prime minister, she only promoted one woman in her cabinet.

I think journalist and activist Ash Sarkar put it well on Twitter, “Sure hippie-dippie sh*t is annoying, but not half as much as young reactionaries licking the boot of hydrocarbon capital in the hope of getting a lucrative job before the planet burns.” I'm glad these conversations are happening and that people care, young people care, old people care, people of colour care. Protests occur to make people in power listen, so until they do, I don't see them stopping any time soon.