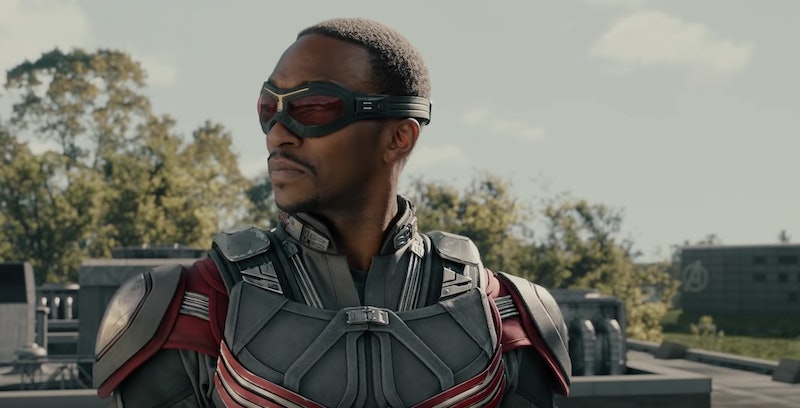 "We don't trade lives." Said first by Captain America (Chris Evans), this phrase is repeated several times during Avengers: Infinity War. It means that sacrificing one Avenger for another isn't how the team operates, at least not under Steve Rogers's lead. A few signs point to the fact that Steve Rogers will probably meet his death in Avengers: Endgame, out April 26. Should Cap die, the whole trading lives thing becomes a little more literal, as it raises the question of whether Steve could be replaced as Cap and by whom. In the Marvel comics, Falcon becomes Captain America, so that very well could be where the MCU is heading.

The prevailing theory seems to be that Bucky (Sebastian Stan), who's Steve Rogers' longtime friend, will take on the mantle of Captain America after Evans' Marvel contract expires with Endgame, but Sam Wilson/Falcon (Anthony Mackie) stands a good chance of becoming the new Cap too. While Bucky adopted the role as Captain America in the comics from 2007-2009, Sam became the new comic book Cap in 2014, which The Verge attributed to Marvel's attempts to diversify its biggest heroes.

In Falcon's comics history, the story of how he becomes Captain America doesn't involve the latter's death. Tnstead Steve Rogers appoints Sam to take on the role. After Steve's super-serum wears off, he can't battle any longer, what with having the body of a regular, 90-year-old human. Thus, Sam was Captain America in the comics for a few years. Later in Ta-Nehisi Coates's 2018 Captain America comic, Steve returns to his superhero identity.

But Falcon's comic book tenure as Captain America wasn't the first time in Marvel comics history that he took his friend's superhero identity. In 1999, Sam also briefly replaced Steve as Captain America when the latter was wounded. That didn't last long, but it set the precedent.

E! News reported that Falcon would become the new Captain America in the comics five years ago, citing a (since removed) Marvel.com interview with Captain America writer Rick Remender. The writer told Marvel.com, "I've been having a lot of fun writing Sam. It's a completely different attitude. The fact that he's not a soldier shifts things up a bit. Sam's not going to be Steve. Steve can be very rigid. That can be kind of joyless at times, whereas Sam is absolutely not that."

Since Steve didn't have to die before Sam becomes Captain America, the former gets to train and help Sam. From 1969's Captain America Vol 1, Steve and Sam have always had a close relationship in which Steve serves as a mentor. Falcon unknowingly saves Captain America from the Exiles, an army assembled and deserted by The Red Skull, and then Steve teaches Sam about why he needs a superhero costume to shield his identity.

Since Sam and Steve have a long history as friends and teammates in the Marvel comics, Falcon becoming Captain America was a natural transition for both superheroes' storylines. Perhaps the MCU will follow the comics' lead and trade in Steve for Sam too. However, the news that Stan and Mackie will be reprising their roles in the Disney+ series, Falcon and Winter Soldier could throw a wrench into those works, as it's pretty much guaranteed from the title that they'll both be holding on to their current alter-egos. One thing's for sure: Captain America doesn't have to die with Steve Rogers.