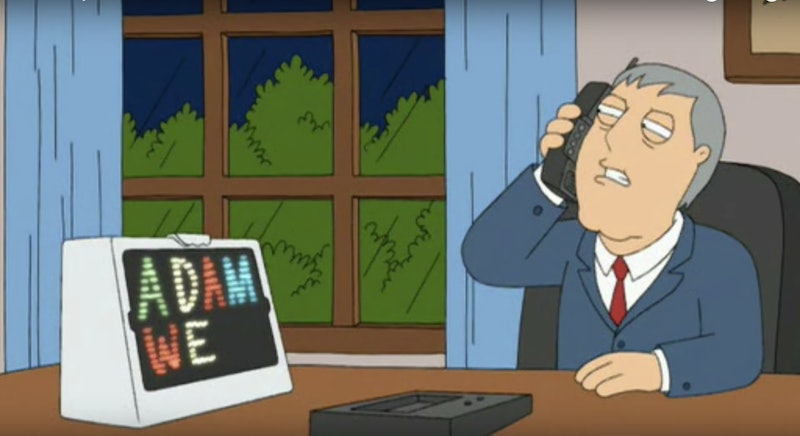 When I first heard the news that Adam West died at age 88, I didn't immediately think of Batman. While that's how most superhero fans remember the actor, I'm familiar with his work thanks to a certain Fox cartoon. Family Guy helped introduce West to a whole new generation of fans, as he continued to leave his mark on TV in more ways than one. He played Quahog's neurotic Mayor Adam West on Family Guy, while also playing versions of himself on other cartoons, like The Simpsons and Fairly Odd Parents. On the latter, he doubled as a character named Catman. (Clever, huh?)

In the 1960s, West became the first TV version of the Caped Crusader. There's no doubt that many know him as Batman. But by continuing his career for decades beyond that, he took on roles, that in some ways, allowed him to poke fun at himself with plenty of humor. And that in itself makes him the definition of a good sport. While the character shared his namesake, I highly doubt West was much like his Family Guy counterpart IRL. Especially since in a statement to The Hollywood Reporter, his family said, "Our dad always saw himself as The Bright Knight and aspired to make a positive impact on his fans' lives. He was and always will be our hero."

The fact that he could play the heroic Batman for years, and then shift to a character like Mayor West, is a testament to his acting range and his comedic chops.

I'm not going to lie, while Batman saved the world, West's role on Family Guy probably accomplished the exact opposite. The Mayor wasn't necessarily a standup guy, by any means, especially when it came to his treatment of Meg Griffin. He literally went out of his way to ignore her, and he was paranoid that everyone was out to get him. He also once believed zombies existed and repeatedly wasted taxpayer money.

But that's not necessarily the point, is it? However mischievous his character may have been, West's role on Family Guy allowed him to impact the TV landscape, not just in the 1960s when his career really took off, but for years after. His list of voice acting work goes even beyond the aforementioned shows.

West once played Young Mermaid Man on Spongebob, as well as a captain on Rugrats. Not to mention appearing in Kim Possible, Scooby Doo videos, and so much more. His talent surpassed a specific timeframe of success, allowing him to really have a multi-faceted career. And that makes him a Hollywood legend in his own right.

Whether you knew him as a literal superhero in Batman, or an antihero on this Fox cartoon, West left his mark on TV and his presence will be missed.