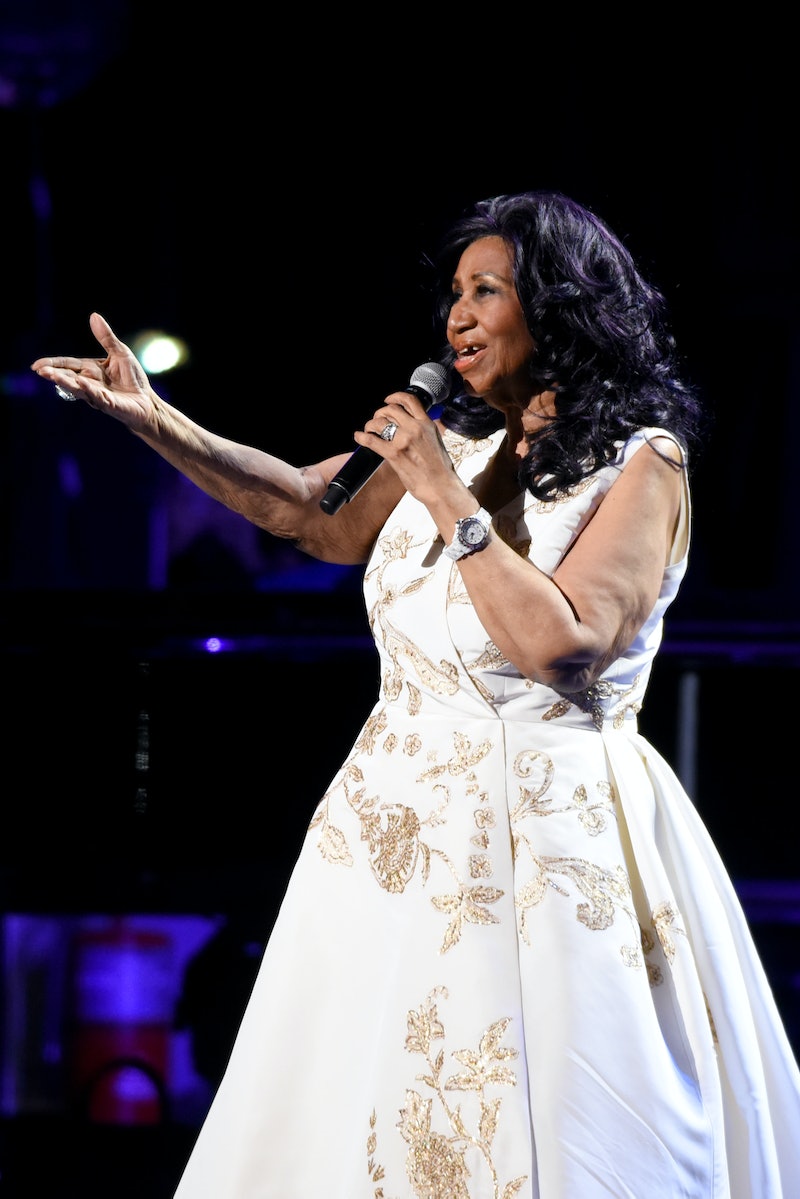 Almost as soon as the tragic news of Aretha Franklin's death broke, fans shared tributes to Aretha Franklin on Twitter. On Thursday, August 16, TMZ and the Associated Press reported that Franklin had passed away at the age of 76. The news came soon after the AP announced that the singer had been "seriously ill," and was spending time with loved ones in Detroit. Fans everywhere took to social media to honor her legacy with a range of posts that celebrated her singular talent.

Some fans chose to share memories from their childhoods, in which music-loving parents passed on an appreciation for the Queen of Soul unto them from an early age. Others shared their favorite performances of Franklin's, and more still suggested that as long as listeners love her, the award-winning singer and legendary, terrific diva will never really die. Even a few found messages from beloved celebrities that celebrated Franklin during her life, pulling hilarious quotes from high-profile people as far-ranging as Kanye West to Barack Obama. People like Paul McCartney, John Legend, Ava DuVernay and more honored Franlkin and shared their memories of time spent with the singer; athletes walked into their clubhouses to her songs in mourning, and a few turned to humor to ease the passing of a true icon.

Here are just a few of the ways Aretha Franklin fans remembered her on Twitter:

Really, what more is there to say? President Obama's reverence for the Queen of Soul truly captures it all.

2. "She Was My First Voice Teacher"

Twitter user @RachaelTheLord remembered that her earliest voice lessons took place at home, for free, and from the best.

Nothing says childhood quite like dress-up and trying to belt along to an Aretha Franklin classic.

It's true: In her day, Franklin was more than just a singer, a shade queen, and legend to be around; she was also a prominent civil rights activist

5. Her Music Is Immortal

A short, sweet, and beautiful sentiment from a writer.

Yes, that's correct: She wasn't just an earth-shattering singer, beef-via-fax-haver, and gorgeous hat-wearer. Aretha Franklin was also a stunning piano player. Because of course she was.

7. Even Kanye West Could Not Defy Her

True story. This was way back on The College Dropout, and it's still an incredible fact.

Franklin's work inspired beautiful work in so many.

10. The Queen Of Soul's Unlikeliest Collaborations

Everything she touched was perfect. From commercials to letters to editors to fur coats and purses — just everything.

11. "The Greatest Vocalist I've Ever Known"

You know John Legend wouldn't say that if he didn't mean it.

The world mourns the loss of Aretha Franklin. But more than that, people are able to come together to celebrate — often with exuberance — her effect on their lives. No matter where you came from, no matter what your history, the odds are Aretha Franklin touched your life in some way. RIP.