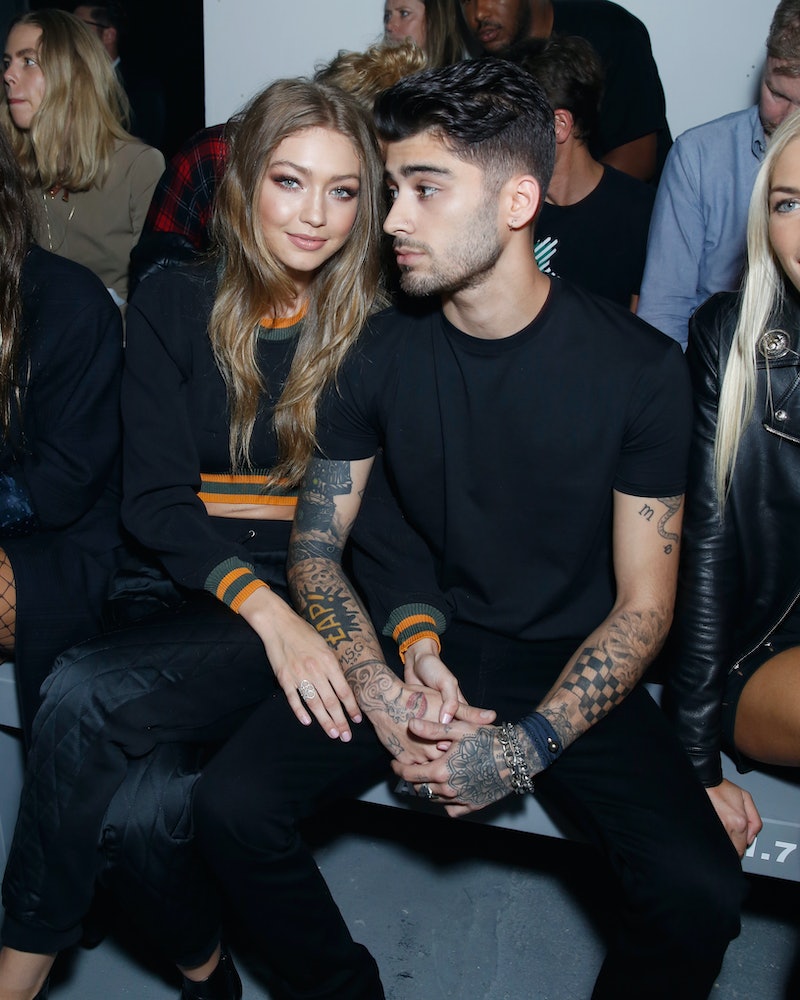 Gigi Hadid and Zayn Malik shocked the world when it was announced that they were expecting their first child. Now, if rumors are accurate, the on-again-off-again couple are about to take another big step in their relationship — if they haven't done so already, that is. Fans think Gigi Hadid and Zayn Malik may be engaged or already married, and it's all thanks to the One Direction alum's new tattoo. Bustle reached out to representatives for comment but did not receive an immediate response.

The rumors started earlier this week, jeweler George Khalife shared a photo on Instagram of Hadid and Malik wearing matching evil eye bracelets that he had made for the couple. "Good vibes only for this beautiful couple!," he captioned the photo, adding, "congrats." In one shot posted to his Instagram Story, Malik's brand new tattoo on his arm was exposed: a poem by Lebanese-American poet Kahlil Gibran's titled "On Marriage".

Malik has shared the poem on his own Instagram Story in the past, according to Elle. And Gibran's beautiful lines like "You were born together and together you shall be forevermore" have made fans think that Hadid and Malik are engaged, if not already married. Neither Malik nor Hadid have addressed the rumors yet.

Khalife told PEOPLE that he immediately thought about sending Hadid and Malik evil eye bracelets once he heard their exciting news, attributing his excitement to their shared cultural heritage. "We’re all of Middle Eastern decent and in our culture, evil eyes ward off jealousy and negativity," he explained.

Aside from confirming their pregnancy news on The Tonight Show with Jimmy Fallon, with Hadid saying she wishes she could've announced it on her own terms, the couple have been largely silent about the pregnancy. But the outlet reports that the couple is "thrilled" about their new addition. "They've been through their ups and downs, but neither stopped caring about the other," a source reportedly told PEOPLE. "They've jumped on the timing of having a baby and are preparing for their new lives."

More like this
Keke Palmer Shares The Sex Of Her & Darius Jackson's Baby
By Jake Viswanath
Hilary Duff's Husband Matthew Koma Has Her Name Tattooed On His Butt
By Jake Viswanath and Stephanie Downs
Channing Tatum Calls Walking Away From Relationship With Jenna Dewan “Terrifying”
By Radhika Menon
Paris Hilton & Carter Reum’s Relationship Timeline Includes A Surprise Baby Boy
By Bustle Editors
Get Even More From Bustle — Sign Up For The Newsletter
From hair trends to relationship advice, our daily newsletter has everything you need to sound like a person who’s on TikTok, even if you aren’t.